Will Rogers with Horseshoe and Lasso

Will Rogers was a beloved political wit who delivered his message in an unassuming "aw, shucks" manner. He succeeded in a time of rapid change for the U.S.A.

Consider the impact on the average citizen of these major changes occurring from the 1910's to 1935:

1910's and on - Assembly line production of automobiles increases their use

1914-1918 - The Great War in Europe, in which chemical weapons were used and almost a total generation of young men killed. Existentialism grows: a philosophy of disorientation, confusion, angst, and despair over the absurdity of the world.

1930's - Dust Bowl weather disaster in the middle of the country. European countries move to prepare for another world-scale war

It was quite an upheaval and difficult for many Americans to assimilate. This was especially true for farmers, with whom Will Rogers particularly identified.

Rogers Provides Comfort and Affirmation While Jabbing the Government

Will Rogers had the knack of telling truths in a clever, charming, and folksy way. He was truly a court jester taking jabs at the United States government, amusing AND criticizing the master (in this case, the US government) and delivering bad news (the frustration and disgruntlement of the citizens) that few dared to convey. Yet, his style exemplified the definition of tact: the ability to tell someone to go to hell in such a way that they look forward to the trip.

Will Rogers had established his popularity as an entertainer before the huge technological and cultural changes slammed the Americans of the new century. Therefore, he had an audience and opportunities to share his homespun wisdom cradled in humor. As it turned out, he voiced opinions and sentiments held by many citizens. More than a few Americans were feeling disenchanted, baffled and left behind by technology, wary of politicians and the wealthy, and longing for a slower, happier, more moral American past. Imparting these thoughts in a humorous and non-seditious style, Rogers became their champion.

Rogers delivered his philosophy as he chewed gum and twirled a lariat. The lariat eventually disappeared as he extended his mode of entertaining into dinner talks, radio, and newspaper and magazine articles, but the gum chewing stayed. Americans trusted him as an anchor of stability who had a conventional home life (only one wife who was with him until he died) and practiced a traditional moral code. Rogers believed that the common man could attain the Horatio Algier dream of hard work leading to success, that one's individualism should be retained, and that advances of industry and politics were less important than the everyday challenges of the farmers or laborers.

Rogers took jabs at the government, calling politics "the best show in the world" and describing Congress as the "national joke factory." His folksy humor and honest, intelligent observations earned the respect of the nation's little people and powerful leaders alike. Will Rogers was a guest at the White House and a friend to Presidents Calvin Coolidge and Franklin Roosevelt. Furthermore,through a working world tour, he met many world leaders. All the while, he stayed true to his values and remained a beloved national political pundit,

How He Got that Way

Will Rogers was born on November 4, 1879 to parents both of whom were part Cherokee. He was the youngest in a well-off ranch family living in Oologah, Indian Territory (now Oklahoma.) He loved learning, but not in school. Will’s passion was working with cattle, riding, and roping.

In his early youth, Will Rogers learned to ride and rope. He was a natural who also worked at perfecting his skills. In fact, Will earned mention in the Guiness Book of World Records for throwing three lassos at once: around a horses neck, its four legs, and the human rider. On the school front, however, Will tried many different schools and eventually dropped out in the tenth grade.

Will enjoyed almost immediate success using his cowboy skills in the entertainment area. He worked hard and in 1902 joined a Wild West show which toured the world. In 1904, he appeared in 2 World’s Fairs (St. Louis, NYC). From 1905 to 1915 Rogers performed in vaudeville, combining his rope tricks with off-the-cuff remarks about the daily news and politics. Although formal school had not been his cup of tea, Will read the new York Times newspaper every day and loved to have intelligent discussions about people, life, the country and the government. His wit soon started becoming as much sought after as his cowboy skills.

Will Rogers and His Wild West Days before 1900

Will Rogers gained exposure and popularity. In 1917 he appeared in the Ziegfield Follies. From there, he entered silent films and later talkies. Will wrote books and syndicated columns for magazines and newspapers. In addition, he had a weekly radio program. All this made him more beloved and respected. On July 19, 1926 Will Rogers appeared on the cover of TIME magazine.

Will Rogers's Comments on Political Parties

"The average citizen knows only too well that it makes no difference to him which side wins. He realizes that the Republican elephant and the Democratic donkey have come to resemble each other so closely that it is practically impossible to tell them apart; both of them make the same braying noise, and neither of them ever says anything. The only perceptible difference is that the elephant is somewhat the larger of the two."

“I belong to no organized political party. I am a Democrat.”

“Democrats never agree on anything, that’s why they’re Democrats. If they agreed with each other, they would be Republicans.”

“The 1928 Republican Convention opened with a prayer. If the Lord can see His way clear to bless the Republican party the way it’s been carrying on, then the rest of us ought to get it without even asking.”

"A fool and his money are soon elected."

“Politics has become so expensive that it takes a lot of money to even get beat with.”

For the 1928 presidential election, Life magazine and Will Rogers formed the Anti-Bunk Party to mock campaign with promises made by candidates often going unfulfilled upon election. This weekly magazine promised that their nominee for the Presidency of the United States would not talk "bunk," as other politicians did. Of course, Will Rogers’s candid comments on American politics, especially that all campaigning was bunk, made him the obvious candidate for the spoof campaign. Rogers ran as the "bunkless candidate" of the Anti-Bunk Party. His only campaign promise was that, if elected, he would resign. Every week, from Memorial Day through Election Day, Rogers’s impressions on the election appeared in Life. Finally, on election day Will declared victory and promptly resigned.

"The income tax has made more liars out of Americans than golf."

“If you make any money, the government shoves you in the creek once a year with it in your pockets, and all that don’t get wet you can keep.”

" The only difference between death and taxes is that death doesn’t get worse every time Congress meets.”

“We don’t seem to able to check crime, so why not legalize it and then tax it out of business?”

“I don't make jokes. I just watch the government and report the facts.”

“There's no trick to being a humorist when you have the whole government working for you.”

“Ancient Rome declined because it had a Senate; now what's going to happen to us with both a Senate and a House?”

“This country has come to feel the same when Congress is in session as when the baby gets hold of a hammer.”

"A senator got up today in Congress and called his fellow senators sons of wild jackasses. Now, if you think the senators were hot, imagine how the jackasses must feel."

“About all I can say for the U.S. Senate is that it opens with a prayer and closes with an investigation.”

“There ought to be one day – just one – when there is open season on senators.”

“Be thankful we're not getting all the government we're paying for.”

“This country has gotten where it is spite of politics, not by aid of it.”

“Alexander Hamilton started the U.S. Treasury with nothing, and that was the closest our country has ever been to being even.” 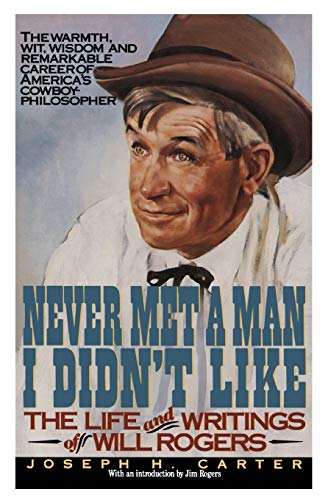 Never Met a Man I Didn't Like: The Life and Writings of Will Rogers
Buy Now

Will Rogers had gained so much popularity through his performances on stage and in film, and his articles that in 1926, the popular high-circulation magazine The Saturday Evening Post financed a European tour for Rogers in return weekly articles by him. Rogers made whirlwind visits to numerous European capitals, meeting with both prominent figures and common people. His articles reflected his gut feeling that Europeans would again go to war, and he recommended that the United States should adopt an isolationist posture. He reasoned that American needs could best be served by concentrating on domestic questions (during the Great Depression, Rogers made a cross-country fundraising tour for the Red cross out of his anger that the government was not feeding the populace.) Will felt it was inappropriate to become entangled in foreign problems when there were so many unmet needs at home.

"Americans will feed anyone that's not close to them."

“Now if there is one thing we do worse than any other nation, it is try and manage somebody else’s affairs.”

“You can't say civilization don't advance, however, for in every war they kill you in a new way.”

“I have a scheme for stopping war. It’s this – no nation is allowed to enter a war till they have paid for the last one.”

Will Rogers, America's Spokesperson for the Common Folk

Given the increasing speed of technological changes in every walk of life and the consistent behavior of American politicians in the 21st century, the wit of Will Rogers remains relevant. For plain talk and common sense, he can't be beat.

Biography of Will Rogers Produced in 1961