A History of Italians in Scotland

What is the history of Scottish Italian heritage? There are an estimated 80,000 Scots of Italian descent living in Scotland. It is believed that almost 70% of Scots Italians can trace their roots back to just the two regions of Tuscany and Lazio. How did this come to be?

"Italians in Scotland are one of the best examples of successful integration. There are groups in every town, every city. This is because the Italians and the Scots have common traditions of hospitality, generosity and respect."

In the 19th Century lots of Italians came to the UK for trade reasons: as craftsmen, artists and performers. The Unification of Italy in the mid 19th Century saw a breakdown of the feudal land system which actually left many poor people without any land. Catholic Emancipation had freed many Italians. Craftsmen were allowed to build churches and many were hired to take on this type of specialist work in the UK. Some never left. Italians gained a reputation for craftsmanship in sculpture and design and also in the creative perfoming industry such as singing.

In the late1880s many Italians came to the UK to escape poverty in rural Italy as a temporary measure. Many brought with them a desire to set up modest businesses such as ice cream parlours, barber shops and fish 'n' chip shops. All were poor and had to work very hard to make a modest living. Many came to Scotland to find even more opportunities awaiting them.

There are many stories about poor Italians being encouraged to pay for a ship passage to New York, the land of opportunity. But, it seems, when they reached the UK they were left behind. Either the ship was never going to New York or they left the UK without them. Some had been led to believe they had arrived in New York but when they found out differently they had not much choice but to stay and try to make a living.

Unfortunately many Italians were recruited as cheap labour by unscrupulous agents in London and found themselves exploited, working long hard hours for little pay. Many were also sent to the North of the UK and in Scotland as ice cream vendors in the street. In 1901 the Commissariat of Emigration was created which outlawed and controlled the unscrupulous practices involving Italian immigration.

In 19th Century Britain, ice cream was a luxury only afforded to royalty and the fabulously wealthy. But for the Italians, homemade ice cream was easy to make using just milk and ice. Many Italians became expert ice cream makers.

This British notion that ice cream was a luxury product changed with the influx of Italian immigrants towards the end of the century. In the mid 19th Century, poor Italian immigrants would set themselves up on the streets of the UK with a simple ice cream churner. This allowed ice cream to be eaten on the streets and it was affordable. The not so rich customers felt they were being offered an exotic taste of luxury.

The tradition of ice cream sellers on the streets of the UK is still with us today and the popularity of ice cream in a country that does not often have hot weather means that ice cream is still considered a special treat for the British.

This may seem even slightly more odd for visitors to see the Scottish obsessed with a frozen product even when it may be rainy and cold summer outside. In the streets of large cities like London, Glasgow, Manchester, the men would churn the ice cream mix in the morning and take the cart out on the streets for the day, shouting in Italian 'Gelati, ecco un poco!' (ice cream, have a small piece).

It is for this reason that they earned the nickname of 'hokey pokey men' as people did not know what they were shouting and they could not speak English. Ice cream came to be known as hokey pokey in many areas.

Later, in Scotland certainly, the raspberry sauce that was often poured on the top of the ice cream became known as 'tally sauce'.

As the Italians progressed onto owning shops, they would sell ice cream in the summer and peas with vinegar in the winter. This progressed to fish and chips. Enterprising Italians would also progress to owning a chain of shops. These chain owners trained and helped other Italians to set up business on their own.

The scale of this growth was unbelievable. In 1903 there were 89 shops in Glasgow. In 1904 there were 184 and by 1905 there were estimated to be 336 ice cream shops in the city. By this time there was an Italian population in Glasgow of around 5000. From the late1800s to 1920, many business grew in Glasgow, Edinburgh and Aberdeen and also in the larger towns across Scotland.

Italian shops and cafes were a breath of fresh air and exoticism for Scottish cities which were used to a more conservative approach to décor and a presbyterian culture which did not include luxury and frippery.

The Italian culture that was introduced to the cities of Scotland was slowly but surely embraced by the population yet feared by the conservative establishment. Their reputation for late opening hours and Sunday trading were railed against by religious groups and other city traders.

But the excitement and personality in these Italian shops and cafés were welcomed by the young looking for somewhere to hang out since they were not allowed to frequent pubs. Some objected to these practices and frowned upon youths being allowed to smoke cigarettes and dance at these establishments. It was once believed that young women who frequented these ice cream cafes went quickly from smoking to dancing to prostitution.

The ice cream shops at one point were to blame for everything from gambling to teenage pregnacy. But the cafés and shops somehow managed to persevere and survive these prejudices. The ice cream shops eventually became a convenient place to meet friends for supper or to have a refreshment late at night when you've been to the theatre or music hall. Who knew that ice cream could have caused so much trouble?

Italian immigrants helped allies fight in World War I, however in World War II things were somewhat different. The threat of fascism caused much suspicion directed towards the Italian communities in Scotland. A large number of Italian males were rounded up at the start of World War II and interned in domestic prison camps in the UK. Others fought with the British Army throughout the war.

When the Second World War broke out, many Italian men were arrested under suspicion of fascist tendencies and expelled to Canada on the Arandora Star ship. This ship was hit by a German torpedo and sank killing hundreds of the deported Italians. As a result of the sinking the UK changed its policy on interring Italians as many were not even involved with fascism.

Italian prisoners of war captured in North Africa were brought North to Orkney to work on the civilian project of creating protective barriers at a vulnerable point in Scapa Flow. Around 1300 Italians arrived on the islands after work began in May 1940.

Those who were interred in Orkney are reported to have had almost an enjoyable time, believe it or not. They were not treated badly and found comradeship with their fellow prisoners and friendly locals. On Lamb Holm Island, Orkney, the Italian POWs were allowed to use their artistic talents to creating flower beds and statues around the camp. They even built a theatre and recreation hut from waste materials.

In 1943, the prisoners of Lamb Holm Island were also allowed to build a chapel inside one of the huts in order to keep morale high. A team of Italian prisoners worked to build a beautiful chapel that still stands today and is one of Orkney's biggest tourist attractions. The chapel was not finished at the end of the war when the Italians were sent home. The organiser behind the project Domenico Chiocchetti stayed behind and proudly finished the chapel.

After the war, Italian communities built up notably in the largest cities of Glasgow, Edinburgh and Aberdeen. Fish and chip shops and Italian cafés became an integral part of Scottish culture and second generation Italian Scots were making their mark on the local communities.

Many have even gone back to Italy to the villages and towns of their ancestors. It seems to be common for both the Scots and the Italians to migrate. The town of Barga has deep-rooted connections with Scotland and has many Scots-Italian connections.

All posters and prints used in this hub can be bought at Art.com through the link below 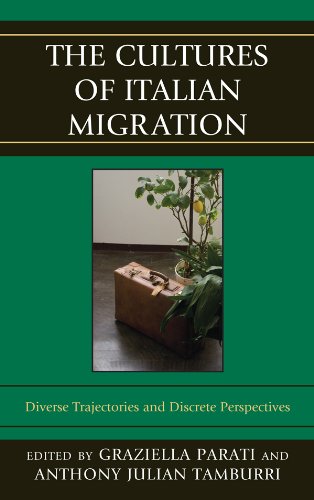