There are another two branches of Kemet which are Kemetic Revivalism and African Kemet. The first being an academic approach to the ancient Egyptian religion (no eclecticism allowed) and the second being an Afro-centrist approach based on the idea that African people still carry the Egyptian genes.

The most popular Gods and Goddesses in Kemet

Isis (known as Aset) - Isis is the goddess of motherhood and a patron of nature and magic. She is the most popular goddess in modern Kemet. According to the ancient Egyptian tradition, Isis is the daughter of Geb (god of the Earth) and Nut (the goddess of the Sky). She was the sister and the wife of Wesir (Osiris). After Osiris was killed by his brother Seth, she re-animated his body and conceives a son with him. The son's name was Horus.

As a patron of magic (she was the first one to learn Ra's name and was handed the key to the secrets of Universe) Aset is involved in most Kemetic rituals and workings.

Osiris (Wesir) - Osiris is the oldest son of Geb and Nut. He is the god of the Afterlife but also the protector of Nile flooding and vegetation. He is the Black Land (Kemet) - the fertile land which fights with the Red Land (the desert) each year. A fight between Osiris and Seth is depicted in this annual cycle.

As the foremost of the Westerners (the land of dead) Wisir is the judge but not the resurector.

Anubis (Anpu) - The master of the Afterlife. He guides the souls over the "River". Later Anubis was adopted by several underground sects and even alchemists as a protector and the keeper of the "Gates" (also keeper of the "Secret").

Ma'at or Maat - The Egyptian goddess of balance. Usually forgotten, Maat is actually very important. Her principle is also used by several philosophic movements and Chaos Magic. Maat is the antagonist of the Chaos or Isfet, as it is known for Egyptians. It is believed that Isfet - Maat battle is commencing on several levels: personal, world, universe, etc.

What is the difference between Kemet and Wicca?

Why are Kemetic God names different from the usual Egyptian names? - The usual names (Isis, Anubis, Osiris) are derived from Greek language. The Kemetic names (Aset, Anpu, Wisir) are as close as possible to the original Egyptian names.

What rituals are used in Kemet? - The main Kemetic rituals are derived from the known facts about religion in Ancient Egypt. The major source of information for spells and practices is the Book of the Dead.

Is Kemet based around Death? - The Death cult was known amongst ancient Egyptians but it was not an obsession with Death. Kemet is not the way to summon Death, it is a way of life that involves an awareness of Death. Egyptian religion had certain prerequisites for a person's soul to have an easy journey to the Afterlife. Some Kemet practitioners are following these beliefs but that doesn't mean they are keen to die.

Does Kemet involve sacrificing? - Definitely not. Some Kemet practitioners make offerings to the Gods and Goddesses but the real Kemet is a celebration of Life, like all neo-pagan religions. Practitioners that claim the necessity of human or animal sacrifices has nothing to do with any of the mainstream neo-pagan movements, it is both illegal and in breach with the rules of Nature.

How is Kemet different from Wicca - These two paths have different beliefs, God systems and rituals. Main deities of Wicca are the Goddess and the God. Kemet practitioners tend to use the traditional ancient Egyptian pantheon (Osiris, Isis, Anubis, Bastet and others).

Is an altar necessary to start practice Kemet? - Some followers do have an altar where they keep the figures of Gods, amulets, symbols and other religion attributes. Others have a simple shrine or naos - a shrine cabinet.

There are different methods of worshipping the gods. Many devotees make an improvized altar and keep their favourite Egyptian gods there. From time to time, when performing spells or on festive occasions, Kemet practitioners make offerings to the gods. Please don't mix this with sacrifice. No pagan, neopagan, wiccan or kemet follower will do sacrifice. These spiritual paths are peaceful and their main goal in life is to spread good deeds and positive energy.

If you are looking for new items to add to your shrine, take a look at the Egyptian God Figurines!

There is no set rule to make a Kemetic altar (shrine). Creating an altar you must use materials and items that seem meaningful to you. As a centerpiece of your altar you can use a figurine of Isis or any other Egyptian god that seems important to you.

You can also get some blank papyrus and create your personalized artwork on it that would represent your devotion and guide you while you're perforing Kemet spells or doing energy work.

A living plant could help. If you don't have this possibility - you can also use plastic plants. Remember, it's not about the substance, it is about the representation and the thought that is included in an object.

You will find that you achieve the answers faster if you use candles. You can find more information about candle magic or just use the colours that mean something for you.

It is very convenient to have a chalice, a cauldron or any other container (a trinket box maybe) that can be used to carry ritual objects. As you continue practicing Kemetic Wicca, your altar will grow and change. New items will appear while some might disappear. Just use your intuition and it will tell you what is best for you.

If you need some ideas, check Egyptian God Figurines!

Ancient Egyptians saw their environment as two lands - the barren desert and the fertile soil near river Nile. If you look at ancient Egyptian mythology, you'll see that in a similar way to other ancient religions, Egyptians viewed the world as a fight (or balance if you like) between two polarities. Good and bad, man and woman, black land and red land.

The main difference between Black Land and Red Land was that the black meant fertility and harvest. It was the fertile mud brought by floods that enabled Egyptians to become advanced in agriculture. The Black land (called Kemet or Khemet by people) gave name to the eclectic revival Wicca religion.

Red land was the desert. It was the opposite of the fertile land but the desert was still revered by Egyptians and many Egyptian Gods were associated with desert powers. Red land was originally called deshret. It is believed by many that the Latin name desertum (the origin of our English language "desert") has been actually created from the old Egyptian name deshret. 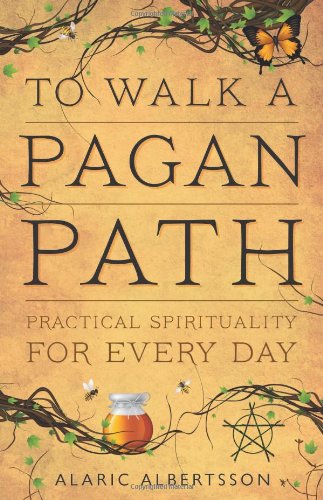 To Walk a Pagan Path: Practical Spirituality for Every Day
Buy Now

Kemet Guestbook - What is your experience of spirituality? Please share it with us!