Leading up to the 2012 presidential elections, Former Minnesota Governor Jesse Ventura stated that he would consider a run for president in the 2016 elections if there were a grassroots movement to help spread the word. In a September 2012 radio interview with Alan Colmes, Ventura, who served as Minnesota Governor from 1999 to 2003, indicated he would consider running for president.

Around the same time, during his book promotion for "DemoCRIPS and ReBLOODlicans: No More Gangs in Government," Ventura spoke with talk show host Larry King and Piers Morgan about a run in 2016. Ventura said there would be 2 criteria for him to run: a grassroots movement that doesn't cost money to get him on the ballots in all 50 states and the movement to be vocal enough to guarantee him in a spot in the debates. Ventura said "without the debates, you're dead in the water."

How to Get Jesse Ventura on the Ballot for 2016 - Helpful Links to State Gov. Websites

In order for an independent candidate to run for President, a candidate has to have their name on the ballot in all 50 states. To do this, there must be a petition to get the potential candidate on the ballot. Each state has a different number of signatures required in order to get the presidential hopeful's name on the ballot. I'm compiling a list of resources for each state and their petition requirements. Right now the information is for 2012 ballots, but read through the qualifications and information.

For example, here are the details for "Non Major Political Party Candidates" from the Minnesota Office of the Secretary of State:

“Candidates of Minor Political Parties, other political parties, or Independents must file by Nominating Petition to get their name placed on the ballot. (M.S. Â§204B.07, subd. 2) Candidates must obtain 2,000 signatures of individuals who are eligible to vote for the candidate being nominated. (M.S. Â§204B.08) Candidates for President and Vice President of the United States do not need to file an Affidavit of Candidacy (M.S. Â§204B.06, subd. 4) or pay a filing fee. (M.S. Â§204B.11, subd. 1). The Nominating Petition must be filed at least 77 days before StateÂ General Election Day (August 21, 2012). The first day signatures may be collected is the first day of the filing period (May 22, 2012). (M.S. Â§204B.08) "On petitions nominating presidential electors, the names of the candidates for president and vice-president shall be added to the political party or political principal stated on the petition. One petition may be filed to nominate a slate of presidential electors equal in number to the number of electors to which the state is entitled." (M.S. Â§204B.07, subd. 2)” —Office of the Minnesota Secretary of State

Getting Jesse Ventura on the Ballot for 2016 Starts Now.

To get Jesse Venture on the Ballot in 2016 we'll need to find out all the rules for Independent ballot access in all 50 states for 2016.

Figure out a way to start a major grassroots Jesse Ventura campaign.

According to DailyPaul.com it is advisable to VOTE THIRD PARTY IN 2012. "If we can get the TOTAL third-party votes over 15% then we can show that a strong "third-candidate"

Jesse Ventura for President in 2016?

Please choose yes or no and explain why in the comments below.

Your unofficial vote...Jesse Ventura for President in 2016?

Jesse Ventura on "The View"

I consider myself a:

“"I stated that if a grassroots campaign took place across america, grass roots that didn't cost any money, If they got me ballot access access in all 50 states and the grassroots campaign could guarantee that I could be in the debates, that I could give serious consideration, 2016 of running for president."” — Jesse Ventura 9/13/2012 on InfoWars.com 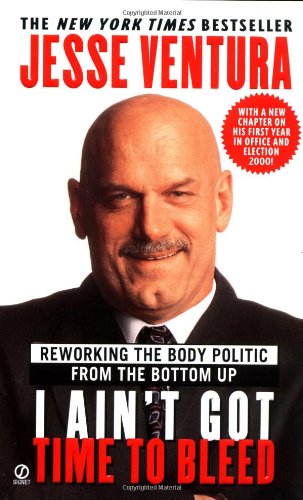 I Ain't Got Time to Bleed: Reworking the Body Politic from the Bottom up
Buy Now

Jesse Ventura On The Issues

63 Documents the Government Doesn't Want You to Read
Buy Now

I Ain't Got Time to Bleed: Reworking the Body Politic from the Bottom up
Buy Now

Recommended by Ventura: War is a Racket by Smedley Butler

“"We fight for the international corporations, we don't fight for the country. There's a great book you need to read. It's called "War is a Racket" by Major General Smedley Butler, hes the most decorated marine in history. He won two congressional medals of honor."” — Jesse Ventura on Howard Stern 9/17/12

Please use this space to comment, leave suggestions, etc. Thanks for visiting!

How To Create a Grassroots Movement Using Social-Networking Sites

Your Comments about Jesse Venture for President in 2016