Be Safe & Have Fun at a Political Rally / Protest

As someone who hates The Man but also hates going to jail, I've been to more than my share of protests.

Stop sitting at home watching MSNBC. If you feel strongly about something, whether it be immigration or the war in Iraq, get out there and actually do something about it for a change. Below are some tips on having a good time and staying safe while acting like a total bleeding heart hippie.

You can show up without a sign (lots of groups will have pre-made ones to hand out), but having a schnazzy sign is half the fun. If you're not going to put any effort into your sign, why even bother? Don't be a lazy hippie--be one of those radical, war protesting ones already.

Material: Use the thick cardboard, not the flimsy stuff. If it's flimsy, it's going to be annoying to hold after half an hour, especially if it's windy. The best sign I ever made was from one of those white, three-part stand up things, like the kind you might use at an elementary school science fair. But you can even use sturdy cardboard boxes, just spraypaint them white so they'll stand out better.

Reinforcements: If your sign is large (more than 3' x 3'), and you think you'll be carrying it around for a long time, reinforce it with duct tape and those wooden paint stirrer things you can get for free at the Home Depot. IMPORTANT: Don't use anything metal or some idiot's going to think it's a weapon.

What to say: Keep it short and to the point.

Text: Don't just write on there with a sharpie. You need big, fat letters, or nobody is going to be able to read your sign from more than a few feet away. Block out your text with a pencil and a straight edge, THEN ink it in. If your handwriting is really bad, you can always use press-on vinyl letters

Don't get too attached: I've seen it done where after the protest is over, the cops make you throw your sign away. This happened at my first DC protest and I was pretty PO'd 'cause I'd made this awesome "Where's Osama" sign. I don't even have any good pictures of it.

Do know what the heck protest you're going to. If it isn't a Free Mumia protest, don't show up with a Free Mumia sign. And you probably think I'm being patronizing or something by saying this, until you go to your first protest and you see the guy with the Free Mumia / Free Palestine / Legalize It sign that has nothing to do with what you all are there for. That Guy is always there, at every protest. Maybe he's illiterate, and his Mumia-loving roommate hands him a sign and tells him to get cracking. I don't know. Don't be that guy.

Don't feed the trolls: do not engage the counter-protesters. Don't yell at them. Don't start an argument, no matter how eloquently-worded. They aren't there to talk. They are there to ruin your day, and if you don't give them any attention, you will ruin theirs instead.

Do stay out of jail. Don't bring anything that could possibly be misconstrued as a weapon, and if anybody comes up with any dumb-as-F ideas, like storming the capitol or setting something on fire, get as far away from them as possible.

If you're in DC, do use the metro. I swear, that city was designed for protesting.

In general, what you'd bring to a protest is the same thing you'd bring to go hiking: comfortable shoes, weather-appropriate clothes, sunscreen, a hat, a couple of granola bars and a bottle of water. It can be pretty tough to leave a protest right in the middle, what with all the streets blocked off, so plan on staying for several hours.

None of this is going to do you any good if you don't bother to vote! Most states require that you register anywhere from 10 to 30 days before the election. If you have moved since the last time you voted, make sure your voter registration is up to date.

Do it now! And if you don't think you can make it to the polls, early voting or absentee voting is an option for anyone. 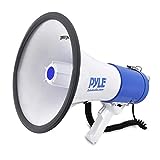 Portable Megaphone Speaker PA Bullhorn - Built-in Siren, 50W Adjustable Volume Control in 1200 Yard Range, Ideal for Any Outdoor Sports, Cheerleading Fans and Coaches or for Safety Drills - Pyle PMP50
I can't guarantee that the cops won't take this away from you, but these are great for small protests
Buy Now

Unfortunately there's always gonna be somebody there who's a little too into it. Don't be on the wrong end of a tazer:

If I were in a situation where I knew I couldn't stay the entire time (for example, if I could not stand for long periods of time, or if I had diabetes and had to eat at certain times), I would hesitate to go to a protest or at least would be careful about it. Sometimes you really can get "trapped" in there because of crowds or barricades, so be prepared to be there for a long time.

What If My Boss Sees This?

These days, with facial recognition software, you can’t expect to be an anonymous face in the crowd. Protesting is an action, and all actions have consequences. That’s why you shouldn’t do anything you aren’t proud of.