Many of the deaths at Andersonville Prison during the Civil War can be blamed on inadequate food and contaminated water supply. The prisoners of war, union enlisted men, suffered greatly from diseases such as dysentery and scurvy, which contributed to over 12,000 dying at the prison.

The overcrowding resulted in concentration camp conditions where men barely had room to lie down. There were no barracks so prisoners lacked shelter from the hot Georgia sun in summer and the chills of winter. The lack of proper nutrition made the prisoners more likely to die from other causes like minor wounds or pneumonia that they might otherwise have survived.

Sacrifice by impression_eye_get (available from Zazzle)

My Great-Great Grandfather's Experience in Andersonville

In June 1864, Abraham Bates Tower was captured at the Battle of Brice's Crossroad with about 1,500 other Union soldiers. They were sent to Andersonville Prison and he was there until December 6, 1864. In that six months he became quite ill with a severe cough, a pain in his side and was suffering from scorbutus (according to his Civil War pension application). When he left Andersonville, he was only 73 pounds, merely skin and bones.

(The picture from the family album shows him many years later. Sorry it isn't very clear.) 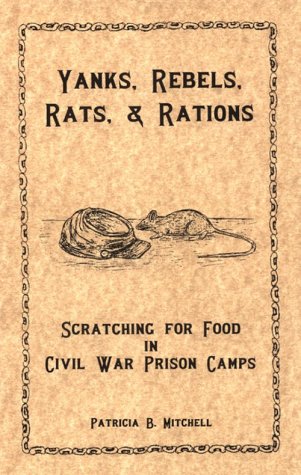 Yanks, Rebels, Rats, and Rations,: Scratching for Food in Civil War Prison Camps
This is a slim booklet of almost 40 pages, but it gets into the details of what prisoners in the Civil War ate to survive in the prison camps. It's what you might discover on your own if you track down and read lots of diaries and accounts by survivors. This will save you the trouble of doing that.
Buy Now

Other Problems with the Food at Andersonville

Besides the limited amounts of food, the prisoners lacked resources to cook the raw rations issued to them. Many of the prisoners had their possessions taken from them when they were captured or they were stolen by other desperate prisoners after they arrived at Andersonville. The lucky ones had a tin cup which they could use to receive their ration of cornmeal for the day. They were usually issued a small amount of meat, either bacon or beef, but it was sometimes rancid or moldy. The camp was dependent on shipments of food coming through by train, but that was sometimes disrupted by torn-up tracks or troop movements.

The cornmeal was ground up corn and corncob together. It needed to be sifted before cooking and eating it, but the prisoners had no way to sift it. The corncobs, although partially ground-up, were rough on the prisoner's stomachs and digestive system. Most of the prisoners had no cooking pots, but a few made plates from half a canteen. Some prisoners without tin cups, used a torn-off uniform sleeve, tied at the bottom to receive their rations.

Prisoners who banded together and cooked their rations over a shared campfire probably had a better survival rate. There wasn't always wood for the fires, and small groups of prisoners with a guard were sent to the woods to bring back pine branches for the smokey campfires. On days when there was no wood, the men would mix water with the cornmeal and form a patty or bread which they would put in the sun to "bake."

Although there are few photos of Andersonville available, these videos give you some background and views of those and of the current museum there.

Other Ways to Get Food in Andersonville Prison

What the Regular Troops Ate

in the Civil War

Rations for the Union and Confederate Troops - during the Civil War

This may seem a bit skimpy for an active soldier in the field, but sometimes the men would add to their meals with food foraged (stolen) from farms they passed as they marched along.

Photo Shows a Typical Meal for a Civil War Soldier

Read More about Army Rations in the Civil War

A Taste for War: The Culinary History of the Blue and the Gray
Buy Now

In Camp, the Troops Cooked over an Open Fire

More about Andersonville by Virginia Allain

Tell Me What Interests You in the Civil War?