It wasn’t uncommon for her to work alone. Most of the time she didn’t give it a second thought but on the evening of April 19, 1990, Michelle Blake was very much aware of how alone she was at the somewhat remote Pit Stop South Convenience Store on South Chancery Street in McMinnville, Tennessee.

When the strange man had first come into the store, there wasn’t anything particularly attention-getting about him. He’d asked Michelle to fill his older model, primer gray Chevrolet truck with gas and she had happily obliged. But now he had returned with a gas jug and wanted her to fill it with gasoline. Not an odd request, not even the subsequent visits were unusual, but it was something about his demeanor that made Michelle uncomfortable.

“I wish he’d go ahead and leave. I’ve already pumped his gas,” Michelle said to regular customer Ted Morton* around 8:30 p.m. on this evening. Morton looked outside to see a man in a gray truck bearing Grundy County license plates.

It was only fifteen minutes later when Susan Foster* and her husband pulled up to the drive-thru window of the store. When ringing the service bell failed to summons a clerk, Susan turned to see Michelle at the gas pumps holding a jug. At about the same time, Michelle noticed the customers at the window and went inside to wait on the couple.

During the transaction, as Susan later told investigators, Michelle was bothered by the man and had described him as being “so weird.” Michelle told Susan the man had been there twice earlier for gas and had returned again “wanting [gas] in a jug.” After this exchange, the couple departed from the store.

At approximately 5 minutes until nine o’clock, a woman who lived directly across the road from the store heard what she believed to be a scream coming from the front of her home. When she heard a second scream almost immediately after the first, she rushed to her front porch and observed a man and woman inside a gray Chevrolet who appeared to be engaged in a domestic dispute so she returned indoors as the truck sped out of the parking lot at a high rate of speed.

When William Blake arrived at 9:05 p.m. with his wife’s dinner, he was approached by two customers who were confused by the lack of an attendant. Knowing this was an unusual scenario, William frantically searched the store premises for Michelle. His search was assisted by the two customers; one of which found Michelle’s eyeglasses lying in the parking lot. The police and store owner were promptly notified.

A search of the store revealed no money or items had been taken and police sensed they were looking at a scene of a crime more sinister than robbery. Finding Michelle Blake became law enforcement’s top priority.

Reports soon came in that a man driving home on State Highway 108 on this same evening had been approached from the rear by a vehicle traveling at an excessive speed and it had passed him on a double yellow line. Another man told law enforcement officials he was on State Highway 127 when a vehicle came rushing up behind him and erratically swerved around him, nearly forcing him off the road in the process.

Residents of Ricky Wannamaker Road just over the Grundy County line told investigators they had heard a vehicle in the area of the nearby Philadelphia Cemetery, one had even heard a woman’s screams, at about 9:30 p.m. on the evening of April 19th but hadn’t given it much thought because there is often loud noises coming from the church volleyball court.

Unfortunately for Michelle, some of these reports would come too late.

On Friday morning, April 20, 1990, Stacy Smartt* had just left her six month-old son with her parents and was just leaving her parents home when she spotted a pair of shoes lying in the grass of the Philadelphia Cemetery. With a second glance, however, Stacy realized it was not only shoes but a body. Fearful for the safety of her preteen daughter who was in the car with her, Stacy did not stop but quickly returned to her parents home and called police.

Tennessee Bureau of Investigations (TBI) agents arrived at the scene to find a deceased female. Although fully clothed, her blouse was partially unbuttoned and her bra was missing. The woman would be identified later that day as the missing Michelle Blake.

At the scene, investigators had observed a “whitish stain” on the victim’s left breast. This was later confirmed to be semen, although postmortem examination showed no evidence of rape. It was determined Michelle had been stabbed a total of seven times. Michelle had also been strangled but it was three of the seven stab wounds to vital organs which had resulted in her death.

Despite clear descriptions of the assailant and his vehicle, investigators could not identify the man responsible and the case grew cold - until June 1992.

Benedictine nun and finance manager Vickie Sue Metzger departed from her Jeffersonville, Indiana, home with the intent to attend a conference in Atlanta, Georgia, on June 7, 1992. The following day, Vickie’s mother received a call inquiring about her whereabouts because Vickie had failed to arrive. Thus began the search for Vickie Metzger.

During the early morning hours of June 11, 1992, police located Vickie’s locked car at the Eastbound I-24 rest area in Monteagle. A subsequent search of the area uncovered Vickie’s body in a wooded area only 1100 feet from where her car was parked. The victim was clad only in her pants, panties, and bra. Her remaining parcels of clothing would never be located but a hunter would find Vickie’s credit cards and other times nearby in 1996.

TBI agents interviewed attendants for both the East and Westbound rest areas. John Allen Chapman was the attendant for the Eastbound rest stop and he willingly submitted sworn statement to investigators. When he was asked to provide hair and blood samples, Chapman obliged.

An autopsy determined Vickie Metzger had been raped and strangled to death. The fluid samples taken during the examination was later determined to match the DNA of John Allen Chapman with a 99.98 percent exclusion of the caucasian population.

Conducting a background investigation of their prime suspect, investigators learned Chapman was a 26 year-old married father of three with a tenth grade education. He’d joined the National Guard after dropping out high school and was honorably discharged in 1992 and since then had been a frequent user of alcohol and marijuana.

It was about this same time a TBI agent recalled the cold case of Michelle Blake’s murder and believed there were similarities to between the cases that warranted a harder look at John Chapman.

His instincts weren’t wrong. DNA samples taken from Michelle Blake matched those provided by Chapman. The former nursery-worker turned rest area attendant was arrested and charged with the murders of Michelle Blake and Vicki Metzger.

Following two trials, John Allen Chapman was sentenced to life in prison plus 12 additional years each for the counts of kidnapping, aggravated rape, and robbery. As of this writing, Chapman is incarcerated at the Bledsoe County Correctional Complex in Bledsoe County, Tennessee. He will be eligible for parole in 2058. 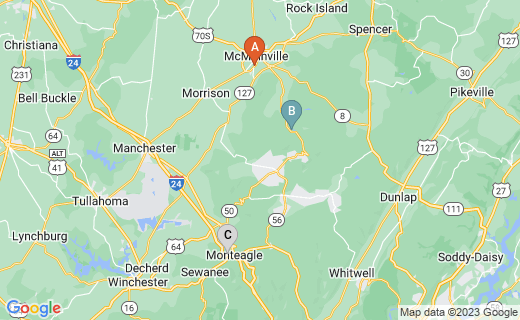