5 True Crime Books About Kids Who Killed Their Parents

1. Terror by Night: The True Story of the Brutal Texas Murder That Destroyed a Family, Restored One Man's Faith, and Shocked a Nation by Terry Caffey

Caffey and his wife of almost 19 years had set firm rules with their sixteen-year-old daughter, Erin, in regards to her romantic relationship with eighteen-year-old Charlie Wilkinson.

She saw only one way to escape her parents rigidity: their death.

And on that fateful night, Penny Caffey would die; along with her two young sons: Matthew, 13 and Tyler, 8. Erin's father Terry would (barely) survive.

Terror By Night is Caffey's first hand account of the events that would change his life in ways he could have never imagined.

From a true crime readers standpoint, it's an interesting case but only about half the book is dedicated to the actual crime.

Terror By Night should be approached with the mindset for which it was intended: inspirational.

Readers are invited into the heart and soul of a man who lost (literally) everything and struggles to understand why while coping with a daughter's betrayal.

2. All I Want to Do Is Kill by Dale Hudson

For high schooler Holly Harvey, life hadn't been easy. Her parents had divorced when she was young and her mother had taken to hosting wild parties in their home and often exhibited lewd and dangerous behavior in front of her young, impressionable daughter but it wasn't until she went to jail on drug charges that she agreed to allow her parents to take custody of their granddaughter.

Carl and Sarah Collier loved Holly dearly but they were strict disciplinarians. And just as this same regiment hadn't been successful with their own drug-addicted daughter, neither was it working with their granddaughter.

It all came to an explosive finale when the Colliers learned their granddaughter was involved in a lesbian relationship with another teenager: Sandy Ketchum. Sandy was a bad influence in a number of ways, the Colliers believed. It was Sandy who was causing their granddaughters bad behavior, in part because she and Holly spent a great deal of time getting high. The Colliers gave Holly an ultimatum: stop dating Sandy or they would send her to a juvenile group rehabilitation home. 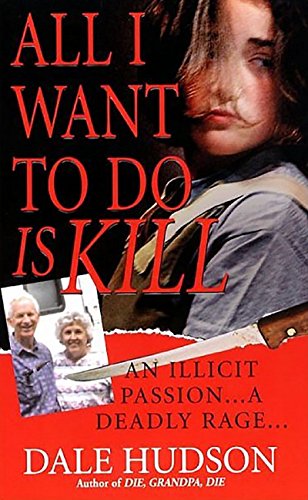 It was at that moment Holly began to find a way out. She believed there was only one way she could continue to be with her girlfriend; that is, her grandparents had to die.

After reading Dale Hudson's An Hour To Kill: A True Story of Love, Murder, and Justice in a Small Southern Town, I vowed to never read another of his books. In the end, I gave it another shot with this one - and was I ever impressed!

From the onset, readers are given an very detailed look into the horrendous backgrounds of Harvey and Ketchum; giving the reader an idea of the path that led to such atrocious actions by two who are so young; then it's on to the crime. Readers are given a play by play of how the crime occurred; a description so vivid that the reader can actually feel as though they are present during the onslaught of this crime.

While reading this book, I found myself wavering from sympathy for these young girls' who had been handed lemons in life and never taught how to make lemonade, to anger that, just because life had been hard and full of people trying to set them on the right path, they felt the desire to murder in cold blood. This book truly gives the reader an emotional rollercoaster ride.

3. Runaway Devil: How Forbidden Love Drove a 12-Year-Old to Murder Her Family by Robert Remington and Sherri Zickefoose

Canadian Jasmine Richardson was only twelve years old when she met 23 year-old Jeremy Allan Steinke in an internet chat room about vampires. Jasmine lied about her age, claiming to be 15 - which is still illegal under Canadian law, but that didn't stop the young man from dating the tween girl.

When Marc and Debra Richardson learned of this inappropriate relationship, they were outraged and immediately ended the relationship between the two and grounded their daughter, as well as putting measures into place intended to stop the duo from being in contact and resuming a relationship.

Jasmine was furious. She would do whatever it took to be with Jeremy, including murder. Jeremy, in turn, refused to be without the girl who hung on to his every word about his 300 year life as a werewolf in human form and his thirst for blood. Her parents would not be allowed to separate them.

It was just a few short weeks later, Jasmine's parents and little brother, Jacob Richardson, were found murdered in the family home. With Jasmine nowhere to be found, investigators feared she too was a victim but it wouldn't take long to learn she was anything but.

4. The Prom Night Murders: A Devoted American Family, their Troubled Son, and a Ghastly Crime by Carlton Smith

New York Times Bestselling Author Carlton Smith has a unique way of writing that flows in an easy to read conversational style, albeit at times repetitive, which is present once again in his 2009 book The Prom Night Murders.

Pastor Robert “Bob” Lee Pelley and his wife Dawn had blended their families just two short years before their murder.

One of Bob’s two children was Robert “Jeffrey” Pelley, a high school senior in 1989 who didn’t see eye to eye with his father on a wide variety of issues; including the punishment for petty theft in which he was forbidden to drive his date to the high school prom, nor participate in any prom night activities.

Sure, this type of punishment may seem like the end of the world to a teen but was it a disciplinary action stern enough to execution-style killings of his father, stepmother, and two youngest stepsisters?

In The Prom Night Murders, Carlton Smith provides his readers with all the facts and while the jury’s verdict has been signed, sealed, and delivered, the author leaves readers hanging as to his own opinion – essentially inviting them to reach their own conclusion.

The case of Jeff Pelley as detailed in The Prom Night Murders – a case that spanned almost two decades – will really motivate readers to ponder, “Guilty or not guilty?”

5. See How Much You Love Me: A Troubled Teen, His Devoted Parents, and a Cold-Blooded Killing by Amber Hunt

Tyler Hadley had been a well-behaved child and very close to his parents but by the time he had entered high school in Port St. Lucie, Florida, he'd become introverted, sullen, and prone to bizarre behavior - sometimes leading to criminal charges.

After several rounds in juvenile criminal court, Tyler's parents enrolled him in daily counseling. When those sessions failed to work, they committed him to a mental health facility.

By July 2011, Tyler was home and spread the word he planned to throw a huge party at his home late one night as his parents were out of town; in truth, they were lying dead in their bedroom.

Yet the party went just as planned: many rowdy teens, alcohol, no chaperons ... it was perfect, thought Tyler.

In her 2014 book See How Much You Love Me: A Troubled Teen, His Devoted Parents, and a Cold-Blooded Killing, journalist Amber Hunt recounts the shocking murders of Blake and Mary Jo Hadley with an in-depth look at the investigation which led to the arrest of the victims' youngest son.

Readers are invited to learn about Tyler Hadley's life during his childhood and more importantly his post-pubescent years.

How did such a well-adjusted, happy child become a cold-blooded killer? I'll let the book fill you in.