Who Owns the United States of America?

Is America Up for Sale?

Who Really Owns Our Country?

How hard is that to answer? Is the question itself clear?

For most of you, it seems the question is about dollars and cents, i.e, who owns the most property? To whom is the government most in debt?

Both questions, I believe, miss the point.

It's not about property because property is the same everywhere. It's the land, whether frozen or bathed in sunshine.

Land can't define anything deep about a country.

Debt? Debts are due the government.

It would be a gigantic mistake to assume that the government is the country. It isn't.

As presently constituted, it's hard to make the case that our government even accurately represents the country, jury-rigged as it is to serve the privileged of any and all nationalities.

No, what constitutes the United States of America is what has always been unique about us - our ideas and our abundant resources, natural, human and creative.

That's where you find the real battleground over who owns us. Each element is fiercely fought over.

A War of Ideas and identity

A People's History of the United States: 1492 to Present) and Gore Vidal (See

The Last Empire: Essays 1992-2000) right, or were they just a pair of radicals spoiling the fun and prosperity?

Are we talking money, resources, control or ideas? Either way, the answers have been obscured by decades of fake history taught in classrooms and patriotism so hyper it's blinding.

When professional baseball teams take the field these days, in games played by rich men on teams owned by oligarchs, we no longer get just the national anthem we always had at the start, we also get a fresh infusion of God Bless America during what used to be the relaxing seventh inning stretch.

Maybe the creepiest thing is that, during the songs, the stadium cameras pan police officers, solders and upright citizens who've removed their caps in reverence, as if that's the stuff we're made of.

Such events woven into the most American sport at its finest are instructive.

Below, there's a countdown to the #1 owner of the United States, all things considered, and you'll be asked to share your own opinion.

Spoiler alert - it can get a little heated. Emotions rise when we talk about home sweet home.

A Cherished Idea Bumped Aside

Probably like you, I thought I had a good idea about who owned everything American. Then, someone whispered something strange that made we wonder.

At a nonpolitical community event, I ran into this writer friend who publishes regularly in respected places. I told him how disappointed I was over how little change took place after we kicked the bad president out and got a new one.

"Obama found out he couldn't make some changes because they weren't going to let him."

This didn't come from your garden variety paranoid or conspiracy theorist. My friend is actually a reasonably well-known writer, with connections, and a successful philanthropist.

Who are "they?" Who really owns and runs the United States...? I wondered, and the search for information began.

My research, peeking around corners and carefully reading the propaganda rich mass media, showed me who, by deduction, reduction and seduction, must own the country or at least the family jewels.

Finally, I had some answers.

Who owns the United States of America? The countdown begins below.

Note: Who Definitely Does NOT Own The United States

American History: Alternate Views - The Stories That Will Never Be Official

A People's History of the United States
Howard Zinn's lively alternative history is all about hard core truths, not the ones we prefer to believe. I love this book. It's an illusion buster, and for someone who believes that accepting truth is critical to improving conditions, it's a way to see what really happened without patriotic filters. Most histories are written by the winners, but that isn't the case here. This one is written by a believer in American values who wishes we were better at embracing them.
Buy Now

In Third Place, Billionaires With Faces

The Boys Who Gave You Our Smoothly Operating House Of Representatives

While some say that the Koch Brothers, industrialists who rank high on the list of American polluters (and that doesn't count what they dumped into Congress), give a bad name to ugly, others admire their stalwart, intense focus on the mission at hand, that is, handing the government of the United States over to the super rich.

In the latest congressional voting season, the dynamic duo delivered on a do-nothing congress, at least nothing that helps anyone but the 1%.

Now, in the approaching season of choices, they are determined to overpower facts and reason while creating fictions about all things Obama.

They have all the racists behind them with their "blame it on the black guy" strategy, and now, they are going for everyone without tint of any kind, which they believe is (1) the majority and (2) too ignorant to figure out they are lying.

Lies My Teacher Told Me: Everything Your American History Textbook Got Wrong, Revised and Updated Edition
How public education is designed to sell a product, not a history.
Buy Now

Second Place: Who Owns The United States of America?

The next largest owner, I discovered, is The Donald Trump Syndicate.

Face it. Donald himself is an egotistical powerhouse, crudely charismatic and a somewhat preposterous individual. What better way to remain nameless than to subsume oneself in this syndicate, crouching behind the ever-present, always amusing Donald.

Think of this as something like what the Republican Party did in hiding its more bizarre and, frankly, frightening figures behind that adorable hood ornament, George W. Bush, in 2000.

Just as W fronted for the likes of Dick Armey, (How do you like that play on words?), Newt Gingrich and Strom Thurman (one of the last unabashed racists to hold center stage in American politics and to simultaneously hide a mixed race, out of wedlock child), the Donald fronts for a group of secretive billionaires, mostly Wall Street bankers, hedge fund managers and idle rich, all of whom agree that you and I should mind our own business.

Whether you agree or not, this is probably sound advice. 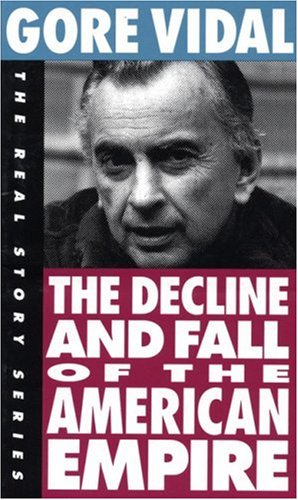 The Decline and Fall of the American Empire (The Real Story Series)
Vidal, again, without makeup.
Buy Now

Note: Who Might Own A Big Chunk Of The U.S.A.

#1: Who Owns The United States of America?

The largest chunk of ownership in the USA is, not surprisingly, the military-industrial complex, including the Armed Services, taking in all the branches, Army, Navy, Marines, Air Force, numerous unnamed and invisible spy networks, the CIA, Haliburton and Boeing.

Together, these groups own 81% of the United States of America.

It's a good investment for them, too.

They receive as annual royalties, roughly, 65% of the federal discretionary budget, plus Haliburton and Boeing investments, all of it tax free.

This wealth allows them to establish storefronts in over one-hundred countries, corrupt legitimate political process around the world, smirk at democratic reform, manage and, sometimes, censor the alleged free press here and elsewhere.

You may have noticed that, in all the endless debates prior to the last presidential election, nobody questioned the dominance of this coalition or its influence on private lives.

The military-industrial complex may now have reached Sacred Cow status, immune from criticism and impossible to break down into digestible components.

Who Owns The United States of America - Your Opinions

Maybe you did your own research or maybe you just disagree to be ornery. Speak out.

Who Owns The United States of America?

Whether material, spiritual or other, the owners are not the people most of us meet on the street every day or those ordered to salute the flag, even as it's been subverted as a symbol of government, not the country.

The rest of us have increasingly little say as the 1% gobbles up what's left of our democracy.