3 Reasons Why Men Think It's O.K. To Cheat

One of the most popular causes for the demise of relationships is cheating. Cheating is responsible for the destruction of marriages, long term relationships, and families. Even though people know the negative consequences of cheating people still do it anyway. There are many reasons why people cheat. In my opinion, none of them are valid because cheating is the cruelest way to treat someone you care about. However, people use these reasons anyway to do what they want to do. Below are three reasons men cheat on women.

This article started because of a conversation I had the unfortunate privilege to hear. After it was said and done I had lost whatever respect that I had for my co-workers. Obviously, these were guys who were having this conversation, and the things that came out of their mouth were shocking to say the least. Shocking or not I had to realize this was the truth as they saw it so instead of remaining angry about what I was hearing I decided to ask some questions to see if I could gain some insight. Yes, I got the insight and whole earful of the most disrespectful commentary an ear can hear. My final thoughts about the conversation when it was over was that I felt absolutely sad for these guys. If their attitudes remain like this they'll have nothing but trouble, turmoil, and a lonely life as long as they live.

I didn't want to just take their word for it, because at the end of the day these could be the opinions of a few inept donkey butts and not indicative of the many. When I researched the subject of why men cheat the statistics and reasons matched the commentary from the conversation. Shocking, sad, and absolutely ridiculous that men think that it's fine to not have any self control over their choices and actions. Yes, I know women cheat too, and they aren't absolved for their actions or choices either. However, this article is about why men cheat so here goes:

Men choose to cheat on their significant others simply because that's what they want to do. Most men believe that it's perfectly fine to have a main woman, and then other females on the side. As long as he can keep the two of them separate where there won't be any problems then he should continue to cheat, because this is what his penis demands. His penis rules his brains, and it tells him that he must have a variety of vagina. As long as he can copulate then he should go for it regardless as to the promises he's made to his main woman.

Some men feel that since his woman doesn't come with interchangeable vaginas that he has the right to have sex with as many females as he possibly can just in case he gets tired of his main woman. I was told that men get tired of having sex with the same woman over and over again. Even though the relationship should have been built on better things; all that he is concerned about is the newness of her private parts not who she is as a human being. Men cheat simply because they want to, and as simple as that may sound that's the number one reason they do it.

During the course of this under stimulating conversation I asked the guys why would they do something like this to the person they claimed they loved. One guy stated that it wasn't about love. It was only about sex. He was a man, and that's what men are supposed to do. Men have been doing this since the beginning of time. They have every right to do it. I told them that this way of thinking was very archaic at best, and just downright ignorant . What traditions are you possibly honoring? From what I knew of them none of them were scholarly or traditional in any way. That statement got me to thinking. If men feel like this is just natural to fornicate with as many females as they want what the purpose of getting involved in a relationship?

People today can do whatever they want. You can have sex with as many people without having to marry or get involved in a relationship. This was the part that still doesn't make any sense to me. When I questioned them further about this particular hole in the grand design none of them could seem to answer this question. They literally couldn't come up with a reason valid or not to explain the utter stupidity of that statement. If you can have any woman you want why get involved in a relationship that ties you to just one person? I still would like to get that question answered.

The second most common reason men cheat is because of opportunity. Some men aren't running around trying to have sex like the jack rabbits do, but if the opportunity presents itself and he can get away with it then he'll most likely jump on that chance. Once again, the guy isn't thinking about the consequences, or the feelings of his significant other. He's just thinking about the temporary satisfaction that he's going to get for this moment. I wonder how he'd feel if his girl was this way? I wonder if the reasons he use will be as acceptable as the reasons he use, or will he feel betrayed? Yes, another non complicated reason to jeopardize great relationships, but it's one of the most common reasons.

Discover the Signs Before You Get Cheated On 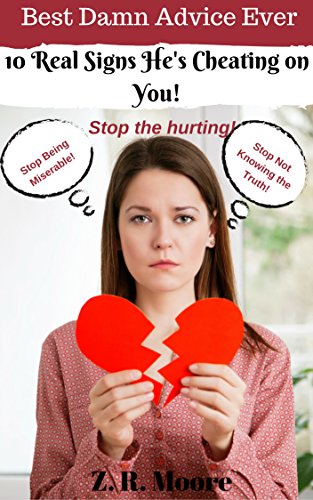 Best Damn Advice Ever: 10 Real Signs that He's Cheating On You
Buy Now

So after the many degrading reasons for cheating I had to make my point. I was getting tired of listening to this crap. My point that I made was simply this, cheating is wrong because when you tell the person that you cheated on the truth what is likely to happen to that person. They're feelings will be hurt, they're definitely aren't going to congratulate or pat you on the back for it. The knowledge of what you've done will be painful. They all had to agree to that statement. When thinking back on their transgressions against their wives and girlfriends even they had to admit there wasn't any positive outcome to behaving this way.

The lies and deceit that has to be practiced is damaging to the person who is being cheated. It takes a mighty effort to conceal this behavior. This effort that could been spent making that relationship better. Nobody wants to lied to and cheated on not even the cheaters themselves. When I asked them how would they feel if this happened to them their reactions were exactly what I thought they'd be. They all said they wouldn't like it at all. With that being said, I told them to put themselves in their significant others shoes the next time they want to do this, because how you feel right now about cheating is exactly how they feel. They'll feel even worse because they want to treat you right, and they're not actively seeking to cheat on you. They may actually be trying to right by you which is what you should be doing for them.

Men will cheat when they're trying to end a relationship. There's no better way to end a partnership than by cheating with someone else. Cheating is a deal breaker for the majority of people. Since he may not have the courage to tell you that he wants to leave he'll opt to cheat instead because he knows this will certainly bring about the demise of the relationship. This cheating is done specifically to dissolve the union that he has created with the person he's trying to leave. It may be a cowardly and cruel thing to do, but most guys do this simply because they don't know any other way to end it.