The Top 5 Myths About Men

Cristale Adams is an online author and publisher. Her articles vary in topics and focus on real life. She always enjoys learning new things.

What is a Myth?

The word myth has several different definitions and meanings. A myth may mean a traditional or legendary story, usually about a hero or an event. It may also mean an invented story, idea or concept sometimes along with a fictitious or imaginary person. Myths have been told for many years, about many different topics. There are myths about werewolves and vampires, along with many other urban myths.Myths can pertain to anything ranging from animals to different personas about certain people.

There are certain types of myths for people to believe in. They all originated throughout the world over a long period of time. Many myths are very old in age. A myth can be recognized as one of the following synonyms- folk tale, legend, fable, saga. Some of the main types of myths types are:

Do You Believe in a Myth?

Do you believe in a myth about men?

The Top 5 Myths About Men

I am sure that almost every woman has said at least one negative comment about men, at least to their friends or to their family, and a negative experience. The point is that a few bad men can give all men a bad wrap, and make other women think negatively about all men. Our bad experiences with one man will influence our decisions and the decisions of others in the future.

I wanted to clear the air about men and how they really are. There are many myths about this creature called man, but most of them are not true. Some myths were probably started by one man doing or not doing something to one woman, who then told her friends and family about him and the situation. Then it became an everyday phrase, which is disrespectful. Also, myths are started because a woman heard about an incident another woman and one particular man, then start to believe that's how all men really are. Every man is different from one to the next, and like with everything else, they are unique in their own ways. That doesn't mean that we should love them any less or disrespect them!

1. Men Are Not Emotional.

This myth is the most popular myth about men. Many women think that men have it under control, but really they do not. Surprisingly, men are more emotional than women. By women encouraging men to show their other side, men can release the emotions that have been built up. Men can open up and become healthier while doing so, by lowering their blood pressure. Men do have feelings just like women do, although a man will not express his feelings as openly as women do. Sometimes men need time to vent also.

Men do take things personally, probably even more than women do. According to statistics at the National Institute of Mental Health, men commit suicide four times as much as women and suicide currently rank as number seven in the leading cause of death for men. Men tend to repress their feelings for the sake of their pride, but things to make them emotional and men do take certain things personally. So when women are communicating with men, they should take both of these myths out of their thoughts.

3. A Woman's Looks Matters Most to Men.

Yes, men do like hot and beautiful women. Men are visual creatures, but looks are not all that matters to men. It is what's inside that counts too. Men like women that are also hot and beautiful on the inside as well. Men like to be stimulated in their hearts and in their minds, not just on the outside. The perfect woman for any man is intelligent, humorous, and compassionate. Good looks are just an added bonus for men.

This one can be tricky to argue as a myth, but how are men supposed to fix a problem or issue when they don't even realize that it is a problem? Men like criticism from women, but only when it is delivered the proper way. When giving a man criticism, do it kindly and in a positive way so that he does not feel put down. Also, women tend to dance around the main topic, but it's okay to get to the point quickly. Men will, in turn, listen are try to fix it.

This is another big myth about men. This myth must have been started by a woman. Men carry the reputation of being tough and strong, but they have the same dreams that women have about falling in love, getting married, having a family. This is just one of those things that are kept inside, to themselves. Men do not spend hours on the phone with each other talking about this subject, it is something that is just there. Maybe it is just men's instinct. 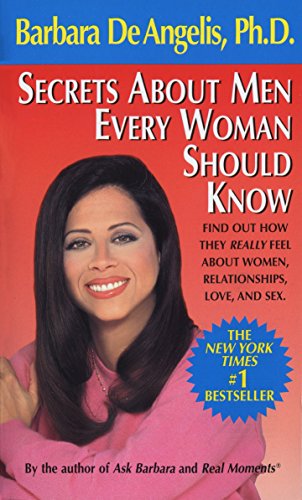 Secrets About Men Every Woman Should Know: Find Out How They Really Feel About Women, Relationships, Love, and Sex
Buy Now