Cheating: Exercise your right to be informed or simply move on?

Are you going to believe me? or Your lying eyes?

Not long ago I found myself watching a daytime episode of the TV show “Cheaters”. For those of you who have never heard of the show and are unaware of what it is about: essentially it involves people who suspect their significant other or spouse is cheating on them. They contact the producers at “Cheaters” who dispatch detectives to follow their mates and in some instances set up cameras in the home if the couple lives together. Each segment concludes with a confrontation between the betrayed person, their cheating mate, and the person they are cheating with. Why do they call?

The reason why one suspects their mate is cheating is because of a sudden change in their behavior which they do not like. Unless you are paranoid by nature odds are you are probably right if you suspect your mate is cheating. Even if it turned out that you were “wrong” and the (behavior) you disliked remained it’s doubtful that you would jump for joy!

Oftentimes people (need) their mate to cheat or abuse them in some way to give themselves permission to leave an unhappy marriage or relationship. In their eyes simply being “unhappy” is not a "justifiable" reason to leave. If you are miserable in a marriage it doesn’t really matter whether if it turns out your mate is cheating. Having said that one has to really know whether or not they consider cheating to be a “deal breaker”. You cannot (control) what another person does. Therefore if you have no intention of leaving what is the point of investing your time and financial resources to confirm what you suspect in your heart?

For most people it’s (ego) gratification. They want to see the look on their mate’s face when they show them how smart they were to figure out what was going on. They want to see them squirm and offer up reasons/excuses or beg for forgiveness. None of which are guaranteed results. It’s not uncommon for the cheater to use their discovery as an opportunity to finally end the marriage or relationship.

In this particular episode of “Cheaters” when the man confronted his cheating girlfriend she said: “I had to do it in order to make sure that you were the one for me! I now know that you are the only one that I want.” I have to admit I never heard that one before! Needless to say her boyfriend told her she needed to get her things out of his house. She then responded by saying, “I’m not going anywhere and neither are you! We are going to find a way to work this out and move on with our lives.”

In conclusion the boyfriend decided to give her another chance. Wow! That Jedi mind trick stuff really works!

Another episode of “Cheaters” immediately followed the previous one. This time around it was the guy who got caught cheating. He reacted angrily to his girlfriend for exposing him in front of television cameras. He seemed to being saying it was her fault that he cheated because she is hardly home and is “insecure”. She began to cry, scream, and curse as he continued to walk off with his newfound mate. He told her she brought all of this on herself. It was as if he were saying, “If you trusted me you wouldn’t have busted me.”

Some people offer their cheating mates “instant forgiveness” because the thought of being betrayed and going through a divorce or breakup are too much for them to deal with. Very often these people offer forgiveness without their mate asking for it or truly demonstrating sincere contrition.

Overtime many betrayed people discover they really can’t forgive or let go of the pain no matter how much their mate attempts to make amends. Some of them end up having an affair of their own or ultimately decide to walk away. Ironically it is now the “reformed cheater” who feels betrayed and lied to. That’s why it’s so important to take a “time out” to decide if you really can forgive your spouse or mate cheating.

As a relationship partner you have a right to know whether or not your significant other is cheating on you especially in these days of lethal STDS such as AIDS. The two options are; seek confirmation of a betrayal or simply trust your instincts and move on: If something doesn’t feel right to you it’s probably not right for you. Would you spy on your mate? Would you hire a detective or the TV show “Cheaters”?

Perhaps the bigger question to ask oneself is: Why would you want someone around whom you did not trust? 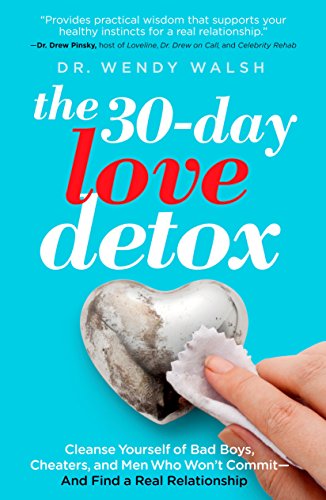 The 30-Day Love Detox: Cleanse Yourself of Bad Boys, Cheaters, and Men Who Won't Commit -- And Find A Real Relationship
Buy Now