Consider the season or theme of your wedding, many colors will compliment the time of year

How to make your own wedding & bridal party flowers, and pomander balls for something unique and different

If you look at the many styles of wedding flowers out there, you can easily make the flowers for your wedding and bridal party; you will save hundreds, and have keepsakes as well! The other great thing about making your own flowers is it’s a great time to bond with future family. You can plan a party to assemble your flowers (and even favors for that matter), with your mother, sisters, friends, future mother-in-law, etc… enjoy great company and feedback, all while saving money and getting the exact flowers you want.

With planning and practice, you could even start a small business making them for other brides!

Styles and Options for your own wedding & bridal party flowers

Styles and options are limitless, as well as types of flowers to use. Fresh flowers are wonderful, fragrant and beautiful. Silk flowers have truly advanced in quality over the years and look very realistic. They are easy to work with, and make great keepsakes.

Before you buy anything!

Before you buy anything, do yourself a favor and takes some notes. Here are a few suggestions that will help you get organized; 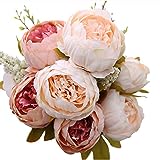 It is important to gather supplies after you devise a plan. One; it will save time and money, two; you don’t want to begin putting them together only to realize you don’t have everything you need. It’s also advisable to do a “practice run” and give yourself plenty of time to put them together before the big day.

I love this website for supplies; they have fair pricing and just about any item you can dream of needing, www.save-on-craft.com http://www.save-on-crafts.com/makbouqandga.html. This site also has wonderful suggestions and tips on how to assemble your flowers. It is also best to check at discount stores and local craft shops. Some of the main flowers in my own bouquet were literally .59 each! I didn’t even spend $60 to make the entire bridal party flowers. I also used some in the table center pieces I made.

Some supplies you may need

My wedding was relatively small, and since our budget was very tight, the most important thing to me was still having it appear classy and elegant. A lot of times you see brides having cheap weddings that turn out gaudy and tacky, I wanted to avoid that. Just because you have to be mindful of your budget does not mean you have to have anything substandard. We had a total of 60 guests at our wedding,our wedding party consisted of; bride/groom, parents, grandparents, one maid of honor, one best man, a groomsman, and a ring bearer. I decided I wanted everyone in my bridal party to have flowers. My bouquet, maid of honor bouquet, corsages and boutonnieres, it was also important to me to have them complement each other, but not look exactly the same. This isn’t always important though. You can make the main flowers extremely pretty and down-grade the others. Simple is elegant! Even single stems are quite lovely. Obviously my bouquet needed to stand out from the others but I didn’t want a typical bouquet, so I chose to make pomander balls, which are probably the easiest create. I also like a natural rugged look, and used sticks in my arrangements. My only regret was not taking plenty of photos as my sister and I made these. So you will see in this article, my end results, I will try the best I can to describe the assembly.

Using the notes you took to determine what you wanted to make, start by making a "mock" arrangement. Practice using a glue gun if you've never used one. The annoying glue strings they make can be removed when you are done. I chose a sheer ivory ribbon to use as handles/source for carrying. We cut the desired length of ribbon and had to carefully create a hole to thread them through, it was not difficult, just not something you want to rush through. Since pomander balls are simply balls covered in flowers, we covered the entire thing with the base colored flowers first, which was a neutral ivory. At first it was intimidating to dismantle the flowers in their purchased form, but it all turned out great. All we had to do was put a dab of glue on the flowers and either glue them, or stick them into the balls. Next the accent colors and leaves were added with no rhyme or reason through the arrangements. And finally for my bouquet, we added willow branch sticks. It was that easy.

For the corsages and boutonnieres we laid out the design and then started to piece them together in a "layering" fashion. Making sure to hide unwanted pieces with leaves or larger flowers. The boutonnieres had hat pins with pearls on top to secure to the gentlemen s suits. Each one was slightly different. My husbands was the most elaborate, and the remaining complemented his. For the corsages, we used corsage wrist bands to secure the flowers to. We also tailored the colors around my center pieces. My wedding colors were well thought out in advance, shade of pinks, ivory, green, and browns. Since I had an outdoor wedding in the fall, we did not require flowers for an isle or church. I chose silk flowers that were generic versions of Magnolias (white and pink), Orchids, and Weeping Willow branches. We were not wasteful and used just about every piece of flower that was purchased.

In the end, making my flowers was relatively easy and I was very happy with the results, as you will be too!