How to Break Up with your Girlfriend

Breaking up with your girlfriend is a daunting task because it almost always has ramifications. It's hurtful and nerve-wracking, it's painful for you, it's painful for her. She may have been your first love or the person you lost your virginity to (or vice versa). And if you've been together a long time or even lived together, you've got the division of assets to look forward to. You're going to have to sit down and figure out who came into the relationship with what and who gets ownership over items that were purchased jointly. Every detail of your lives must be analyzed and sorted, which can be a hard thing to at a time when things are hard enough. Break-ups dredge up some of the most difficult emotions you'll ever have to live through.

But that doesn't mean you shouldn't do it. Because if you are considering breaking up with your significant other, then it probably means you aren't happy. And if YOU aren't happy, then SHE isn't happy. Unhappiness isn't healthy, and life is too short to stay in a situation like that.

What NOT to do

DON'T do it over the phone, through Instant Messenger or on MySpace. I don't care how old you are, even if you can't stand the girl now, you did care about her at one point and owe her the courtesy of ending things to her face.

DON'T lie about your reasons for wanting to break up. If she's too clingy and you need some space, or you've met someone else and you'd like to explore this new frontier, come right out and say so.

DON'T be brutally honest and don't insult her. Even if one of the reasons for the break-up is that she sucks in bed or your physical chemistry is lacking, do not tell her this outright. It is completely unnecessary.

Open the conversation by getting straight to the point, saying something like, "I'm no longer happy in this relationship" or "I'm having second thoughts about being in a serious, committed relationship." You want to avoid attacking her specifically at all costs, so use these suggestions rather than saying, "I'm no longer happy with you" or "I'm having second thoughts about being with you." Next, be prepared to explain why. Tell the truth as gently as possible; don't sugarcoat it too much and definitely do not lie. Even if you're fed up with her and can no longer stand to be in the same room with her, remember that there was a time when she was all you could think about. There was a time when your love for her was strong, and she deserves to be treated with patience and respect during this difficult moment.

Psychologically, nobody responds well to direct attacks that use the word "you." How you explain yourself to her and the words you choose to use are very important. Let's say that your reason for wanting to break up is that she's very clingy and needy, insanely jealous and irrationally possessive. Instead of saying, "You're too clingy and you're way too needy" try saying something like, "I feel like I need more space" and "I'm at a point in my life where I don't want to have to answer to anybody." Another option is, "I can't give you what you need, and it isn't fair to you for me to keep you in a relationship like that when you could be out meeting the person who can."

Be prepared for her to quickly cycle through all five stages of mourning.

During the anger stage, if your girlfriend feels like she is being attacked (which is a common reaction when someone is being told there's something wrong with them) she will immediately go on the defensive and start retaliating against everything you're saying. She may tell you that your reasons for wanting to leave aren't valid, that she didn't do anything wrong, that you're not perfect either, etc. But if your heart is set on ending the relationship, firmly but gently tell her that your concerns are real and nothing she says is going to change that. Don't allow yourself to be distracted from the task at hand by getting dragged into an argument that analyzes and dissects your reasons. It's a diversion tactic that could have you sitting around for hours going over every angle. Doing this just postpones the inevitable. If your girlfriend approaches the anger stage in this way, tell her straight up that your feelings are valid even if she does not agree with your reasoning, and inform her that you are not going to sit here and fight and nitpick over every point.

Another common response is to turn everything back on to you and start listing your downfalls and character flaws. To avoid getting into a lengthy discussion about how much you suck, openly admit that you're not perfect and you're fully aware of it, say that you know you have faults of your own and would never claim otherwise, then direct the conversation back to ending the relationship. 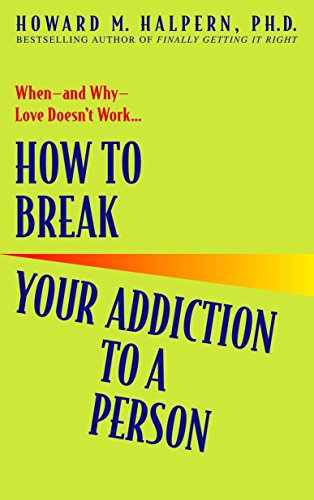 How to Break Your Addiction to a Person: When--and Why--Love Doesn't Work
Buy Now

What to do if you're cheating on her

If you've been cheating on her and want to break-up so you can pursue a relationship with the other woman, you might as well just tell your girlfriend the truth because I guarantee she's going to find out anyway. If you're interested in someone else but have not yet crossed the line into cheating, be honest about this, too. Tell your girlfriend that you've developed feelings for someone else but that you respect her too much to cheat on her. However, it is something you want to explore so you wanted to be upfront with her before you actually did anything. You owe her honesty.

In this case, it is very common for a lot of women to start thinking there's something wrong with them, that they are not good enough or are lacking in some way. Although it's cliché to say, "It's not you, it's me" it's important to stress to your girlfriend that she didn't do anything wrong. Sometimes you just click with another person in a different way and feelings develop unexpectedly. Reassure her that she is an amazing, beautiful girl, but stick to your guns if you're truly set on leaving. Tell her that you're not going to be a jerk by keeping her in a relationship and sneaking around behind her back.

Be prepared to spend at least an hour on the break-up conversation, if not more. Plan the break-up for a block of time when you know you're both going to be free. Most initial break-up conversations last several hours and span two or three days. You don't want to have to rush. Be patient, answer her questions and comfort her if she cries. At some point, however, you're going to have to cut it short. Once everything has been discussed there's no need to keep rehashing the same points. It just prolongs the pain, and don't be afraid to explain this to her. After a reasonable amount of time has passed, let her go so she can mourn on her own and talk to her friends to gain some perspective. She'll probably need a few days to come to grips with the situation, and will most likely be calling you during this time to express either extreme anger, guilt or sadness. There's nothing wrong with that, but after a week or two you may have to be a little firm with her because the sooner you break away from each other the more she can heal and the quicker you can go your separate ways.

Oftentimes, the break-up process is equally as difficult for the person who is doing the breaking. You may love your girlfriend deeply as a friend but find that your in-love feelings have faded. You may be dissatisfied with the direction the relationship is moving or have learned things about your partner that you don't appreciate and can't live with. This can be heart wrenching if you had hoped to spend your life with this person. But you owe it to yourself to do whatever you have to in order to make yourself happy, and you owe it to her to let her be free to find someone else. Sometimes you have to close one door to allow another one to open elsewhere.