Marry Rich and Choose Your Man

If you want to get married why not marry rich? There are plenty of rich men just waiting for the picking, and its up to you to learn how to think like a rich man in order to get them to fall in love with you. If you have been paying attention to televisions shows and the news media chances are you have a very warped idea of what the rich are really like. In general, they are hard working people who earn their money by making sacrifices when others are splurging and are much more disciplined and respectful of the value of money that the average person. After the Occupy Movement began its anti rich rant, people have been under the impression that wealthy people are spoiled people who take advantage of poor people. There are always exceptions, but as a rule, this image is as far from the truth.

To win the heart of a rich man you should understand the fundamentals of what makes him tick. If you are not well organized, you should learn how to put your life in order to a tee. Your wealthy man will admire you for it, and you will save more money once you have your life in order. Learn about money and how to invest. Most women are irresponsible when it comes to finances and you will truly be a stand out if you can understand and appreciate the power of investments. Read books about personal finance, read profiles about successful entrepreneurs such as Donald Trump. This will put you in the right frame of mind, as well has help educate you on success. If you have not already read, "How To Win Friends and Influence People, by Dale Carnegie, I strongly suggest you do it now. This is a book that should be read by everyone at some point. If you digest the information, you will be a better partner, manager and more success motivated. There is a lot more to getting a rich man than working out, having plastic surgery, and being a glamorous object. Women like that are not hard to find and many men, and most rich men will soon tire of a woman who looks like she costs a lot and will not in any way add to the man's assets. Rich guy's guard their money and are suspicious of women trying to lure them in too soon.

It is very important to let the relationship develop slowly. Women often chase away men when they become impatient and put pressure on their boyfriends. A rich guy is often twice as skittish about dropping his guard and letting a woman in his life than a poor guy, so you have to be twice as clever and twice as patient and laid back.

I can remember a woman of little means, and not strong in the looks department hooked up with a wealthy business man. The man obviously liked the lady a lot and began introducing her to friends. This was a first for the man who was dedicated to his business and after his wife passed away, he was reclusive. Now this lady was changing all that. It was looking like he was headed for marriage as he even expressed that he wanted to settle down with her eventually. They had been together for about one year when she started to put the pressure on hard. She sold her home and was asking that he put her name on the title of his house. It became a big argument and the rich man who was happily thinking about marriage a few months before was beginning to get cold feet. The aggressive and manipulative moves that the lady was making were leading him to question her motives, and he slipped away while the getting was good.

Be sure to keep busy with your own life so that you do not become too overly anxious to get your relationship nailed down right away. When a woman tries to move things along she will seem desperate and no one wants to think that they are dating someone who is desperate.

Join an investment club or participate in some class or group that is geared towards business development, or increasing your net worth. It is vital that you understand his mind and are able to think like a business person also. Hopefully, you will become so motivated by this that you will actually become more business and success oriented, making you a truly good catch for your rich guy.

As far as your personality goes, it is always wise to be reserved and do not become intimate too soon. Rich guys are used to cheap women who lay down on their backs too soon in effort to hook a man. You will be respected and will stand a much better chance of being a "keeper" if you seen like you are worth more than the average gold digger, or desperada.

If you don't have a rich man you are focusing on yet, read Find a Rich Man to Marry.

I once read an article that was stating rich men want to marry a perfect 10, and that if you do not meet those requirements you are out. This is simply not true. Although it may appear that way due to the fact that the media is always focused on couples who fit into this scenario, it is not the typical situation. Moreover, do you think that there can be any happiness at all being married to a guy simply to be his trophy? Do the best you can with your looks because neat, clean and sophisticated looks are what rich men are attracted to. Also, be sure and keep yourself trim. Rich men generally are much more serious about weight issues. Thin women look more elegant and tend to represent wealth, while heavier women are considered working class wives. There are exceptions of course, but to fit the general mold, keep yourself neat and trim.

Help with Marrying Rich on Amazon 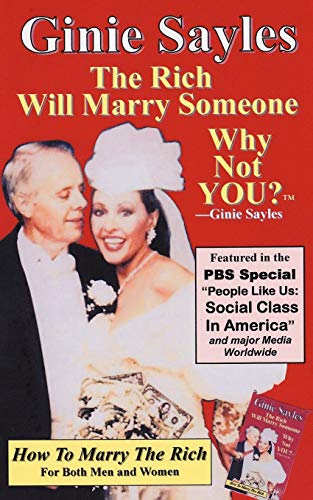 How To Marry The Rich: The Rich Will Marry Someone, Why Not You? TM - Ginie Sayles
Buy Now