I Didn’t Mean to be a Big Pest

Do not be fooled. Just because you see only one side of anything, do not forget there is always another side to it. Between publishing hubs,

Is Being a Pest

being so rough on my family and friends that when I meet them, they look away and ignore me? Well, the answer is YES. But for all of these years I have just written this action off as the ones doing this were just distracted. And I believe that. To prove my point about daily life having its share of pests, I was watching one of my favorite shows last night: “Gomer Pyle – U.S.M.C.,” starring Jim Nabors as the goofy, good-hearted guy from “Mayberry, N.C.,” that portrayed the daily-adventures (or misadventures) of “Pyle,” as he takes on life in the Marine Corps.

Frank Sutton plays the hard-nosed, no nonsense sergeant as “Vincent Carter,” and the entire plot is about how “Pyle” causes “Carter,” a series of mishaps, accidents, and visible misunderstandings that somehow work-out for “Pyle,” making “Carter” almost explode. And in this show, I saw myself. Not as “Carter,” but “Pyle.” You have the option of believing or not believing what I have just said.

I suppose that the “straw that broke the sitcom’s back,”was last week’s episode when “Pyle” had just been given a week off to head to his hometown and visit with the local’s: “Andy Taylor,” “Opie Taylor,” “Bea Taylor,” “Floyd Lawson,” and his cousin, “Goober Pyle,” who took over “Pyle’s” job at “Wally’s Service Station” near “Mayberry, N.C.,” all of “Gomer’s” pals. “Gomer” was of course, excited about visiting with his friends because it had been 36 minutes, 3 months and 2 days since had left “Mayberry.” to fulfill the need to serve in the Armed Forces forces for at least two years.

The Pest is Born Early

on this sitcom and I know that none of you have wondered what I am leading to. Setting the scene, “Carter,” is sitting at his desk in the Duty Hut doing some paperwork and “Pyle” walks in with this huge humongous smile on his face and says, “Surprise! Surprise! Surprise!,” his trademark slang phrase. “Carter” automatically looks upset and glares at “Pyle,” who announces (loudly) here to confirm his week off to go to “Mayberry.”

“Carter,” is halfway irritated at “Pyle’s” beaming surprise, but holds his temper in check. Okay. Now for the ending of this scene where I finally understood by “Pyle” and “Sergeant Carter,” were at odds most of the time. So “Pyle,” picks up his traveling papers, as it were, and starts out the door, says good-bye to “Carter,” and starts out the door.

“Carter,” bids him a safe trip and for him to have a good time and starts for (a second time) and “Pyle” returns to tell “Carter” that he is very grateful for him (“Carter”) giving him a week-off and starts out a second time. “Carter” sits back down, still controlling his irritation, and as he starts to pick up his reports, “Pyle” barges back again to tell “Carter” that he will see him in about a week.

the numerous, annoying times that “Pyle” exited and returned to this scene? Three. Count them. Three very unneeded, aggravating times that he just had to walk briskly in to tell “Carter” about how long he would be gone and would be sure to see him (“Carter”) in a week’s time. This scene took about five and a half times. Maybe six, but the ONE take would have been very understood. I can fully-fathom being grateful for someone or company or even as stringent as the United States Marine Corps, would all offer a certain amount of giving for their friend or employee, but in my opinion, there is NO ONE employee, friend, or soldier who would come back THREE times to tell a superior that he, the soldier, friend or employee appreciated the time off. As much as I was grateful for the one-week vacation that I had in the paper business, I did not tell my managing editor, “thank you, boss, for the seven days off,” and come back two times to repeat this line. He would have thought I was off the beam. And so did “Carter,” as I saw in his face, the utter aggravation that “Pyle” caused and for what?

And When I Endured

“Sergeant Carter” walk to his desk, the irritation showed in his face—I do not know if this was scripted or just a real point of irritation produced by “Pyle.” But my point, and if you finish reading this hub, and have an urge to watch “Gomer Pyle – U.S.M.C.,” you, like me, will realize that there is NO ONE who is as good as “Gomer Pyle.” If you know anyone who is perfectly-good, never making mistakes, just doing things perfectly-right, show them to me. I would love to meet (and write) about them. But do not spend a lot of years in search of PERFECT people, because they do not exist.

Although I endured “this” episode of “Pyle,” I was reminded of how (over the years), that “I” have become a pest to others and never knew it. What a sad state of affairs, the old saying goes, because the things that I did unwillingly, were in every way, made me a pest. Oh, I knew about the knowledge of pestering my friends and family, because it was only for fun, but when I was being a SERIOUS PEST, things such as calling a girl to get a date and when she agreed, like “Pyle,” I would call her about three more times to just thank her and to tell her how grateful that I was to have a date with her. No wonder that she called me after the third call and told me that something had come up and she couldn’t go out with me. Talk about wonders of life.

At the time of these early “pestive” times, I was 21. But with some extended-studies, and talking to others about these things that I did which were pests to others, some people told me that I was suffering from O.C.D., (Obsessive Compulsive Disorder) and this particular “pest” which turned out to be bigger than any beast of King Arthur’s day . . .I tried to encounter this pest which would sometimes make me check the light switches several times in my home, making sure that the door of my house was secure and locked before I went on my journey. These were only a few of the things that I did not know where pests that I did not see or understand and all the time, it was NOT me doing these things, but the Pests Inside, which would make for a great Stephen King novel and book.

There was this time in my adulthood when I was 25, I would visit my friends who were both my age and had just married, so as to not lose their friendship, I went over to their home at least once per day of the week, seven times in a week and later I sensed that both the guy, a dear friend who grew up with me and his wife whom I got to know when I graduated high school, but I could see irritation in their faces and how the wife’s would roll each time that I would find myself telling the same stories that I had told the day before. Pests. True and blue. Pests without horns or pincers as lobster’s have and no horns as those on Lucifer’s head. But just as annoying. 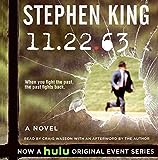 11-22-63: A Novel
Stephen King: those two words automatically-define horror. But with a twist of reality that keeps the reader in suspense, but not causing them to fall on the floor and faint. King is the master when it comes to unraveling his twisted-but-colorful writing and at the end you will be like me: loving his next novel.
Buy Now

So You Now Understand

the “what” of my early life, not the “why,” as it pertains to me allowing urges to make me do certain things over and over again, to just find some area of satisfaction to allow me to experience peace. Today I am on a watch for my life, as it were, as I know that I cannot allow this “Devil Pest” to surface in my life today, because at my age, 65, compounded with the medical battles that I have, then I know that I was an unknowing, unwilling pest to those around me.

I do not know how my life would be, to be completely-FREE of the pest within, but I would love to try.