Jealousy: The Root of All Evil

Some people believe that money is the root of all evil. If I were to be asked what the root of all evil is, my response would be jealousy. Of course jealousy can be in positive ways such as motivation and determination towards accomplishing something beneficial. However, there is negative jealousy which is manipulation, deceit, self-destruction or destruction of others. It is a common emotion that can produce hatred towards someone if they fall victim to such people.

I have a female cousin who is 4 years older than me. All my life she has tried to bring me down and sabotage every ounce of happiness that came into my life. From dating and the clothes I wore, to the jobs I’ve had and the friends I’ve made.

Women get jealous of other women for being better looking, more independent, well-liked, and any other positive thing they have going for them that others would like to have too. Sure it would be nice to have that killer body, great facial features and make enough money to live comfortably as well as an outstanding social status, but why not be genuine to that person? Why don’t they worry about their own lives instead of worrying about what someone else has? Especially when the other person has done nothing bad to make them feel like ruining any “good” in their lives.

Look at the older kid movies such as Sleeping Beauty, Snow White and Cinderella. The villains in that movie are jealous of these three princesses. Yes it is a fairy tale, but the intentions of these villains were to ruin them because of their envy. “Who is the fairest one of all?” It surely wasn’t the wicked queen. It isn’t fair for good people to be treated with such disrespect just because they are doing well or strategize to achieve something good in their lives. Some people could be jealous because of someone else’s personality too. It doesn’t have to be what they have or what they do. My cousin was never hugged and kissed by her mother or given the real love that a mother and daughter should have. My mom and I on the other hand are very close and we hug all the time. My cousin tries to tell my mom about things I’ve done in the past to try to get her to be upset with me and go against me. At one point her dad (my uncle) told me that he had more respect for me than he does his own daughter. She is ruthless and thinks everyone should cater to her. In fact, I believe she may be somewhat of a narcissist, but I will make another hub about that in the near future. It just really disgusts me that some people out there are so selfish and only care about themselves. It is good to care about yourself don’t get me wrong, but to look down upon people that possess something you want is unethical and quite frankly, childish as well.

When you have a friend/relative that gets promoted in their place of work, sees or knows someone who has gone through a dramatic weight loss, or ends up finding a life-long partner they are truly happy with, in most cases you would feel happy for them. You care for that person and would want only to see them happy as well as creating a stable lifestyle. One can get jealous of this, but at the same time, this jealousy doesn’t cause manipulative behavior to try to take that away from them. It can motivate you to do your work more diligently in the workplace or work harder so that you are able to get that promotion you’ve wanted, take on a healthier lifestyle when it comes to eating and exercise more, work on yourself so that you can find that one person that’s right for you and who makes you happy. It can give a person the motivation and the will to go out there and do the same thing for themselves. The saying is, “You can do anything you put your mind to,” so if there is something other people have that you want, go out there and take the necessary steps to achieve it. Be determined enough and it will be yours for the taking.

For me personally, this has been the type of jealousy I have been dealing with for most of my life with my cousin. People who are jealous of others don’t ever admit it in most cases, but the signs aren’t hard to tell sometimes. Here are a few attitudes that may indicate that someone is jealous of you.

1. When you have good news to share with your friend/relative, he/she acts as if it’s not a big deal. This is pretty self-explanatory.

3. When friends/family find out that you are doing something that really makes you feel good about yourself or something that you feel you’ve improved on in your life, they discourage you and tell you that it doesn’t make sense to them when in fact it makes perfect sense to you. For example, my cousin has tried for 8 years to pass her State Board Exam to become an LPN. I, on the other hand, applied for a receptionist position at a hospital. The hospital called me back for a job interview and I was excited about it. When my cousin caught wind of me having this interview at the hospital, her first reaction was negative. Instead of her saying, “That’s great! Good luck! I hope you get it!” She says, “Oh. Well what do you think the chances really are of you getting this job?” Again, discouraging me to think that I wouldn’t even be considered for the position due to the competition out there when I am trying to stay positive about it and give it all I’ve got when I go to this interview. There was no support from her what-so-ever. Speaking of, that is actually #4.

4. No support from friends/family at all. You fall into a rut. Your car gets a flat tire on the expressway and you are left without a spare. You reach out to them to help you (someone you thought you can rely on), but when you call them in your time of need, they come up with every excuse under the sun as to why they won’t be able to assist you. Either that or they promise to help you but they don’t. Now I understand that some people may actually be busy with their own lives, but when you know a person well enough to even know their schedule or how they are with others beside yourself, you can get the hint that they are just trying to get out of being the one to help. I’m not giving this example to say that people would be jealous that you are stuck on the side of the road. They may have been jealous of you to begin with so why would they help you? They would rather see you suffer.

Jealousy usually stems from people who have low self-esteem; people who have deep issues in their own lives. They don’t like seeing someone be one step ahead of them or possess something that they’ve wanted for a quite some time. Tearing them down would be their ideal move for them so they can feel good about themselves since you wouldn’t feel good about you. They can try to ruin any happiness you have, and the best way to deal with this is not to let those kinds of people into your personal life, or better yet, not at all.

With family though, it is pretty challenging considering you have holidays, weddings, and other reasons for gatherings that may make you feel uncomfortable when faced with this particular person. In fact, if you are dealing with jealousy from a family member, just the fact that you’re family should be all the more reason to try to help you, encourage you and support you, right? You would think so, but that is far from the case with me. Yes, you always have the option of ignoring them completely and engaging in socializing with those that don’t associate with them at that particular time, but how often does that happen? And if it does, how uncomfortable it must be to be in the same room with someone you know that would love to see nothing more than you failing in life. You are able to sense the tension in the atmosphere and the resentment you have towards that person until the issue(s) are addressed and handled as adults. But we all know there are some adults out there that do not handle matters as adults like they claim they do, or like you would think they can. Sometimes it better to just say nothing at all, and if you do, keep the conversation to a minimum without letting them into the deeper side of you. People like that don’t need to know everything you do and why would you even want them to? Why would you even want them to be in your life? But of course, they are itching to know every detail so that if it isn’t good news, they can feel content that you didn’t achieve satisfaction. 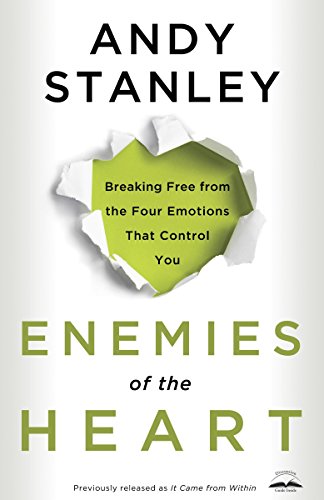 Enemies of the Heart: Breaking Free from the Four Emotions That Control You
Buy Now