Jungian Archetypes: The Difference Between the Mother Archetype and a Mother Complex

Introduction to Archetypes in Relationships

I would much prefer to write hubs about going to Paris and shopping, but occasionally I feel the need to deal with a more difficult and complex subject. Such is the topic of this hub. Even if a person is not interested in psychology and/or archetypes, the difference between the Mother Archetype and a Mother Complex can wreak havoc in his life. Sometimes it helps to have at least an intellectural understanding of things even if working out the difficulties is the task of a life-time.

A word of review:

Archetypes are active energy centers in the collective unconscious, and are, therefore, active in all of our lives, whether or not we know the words or understand the concepts. They have both positive and negative aspects. Archetypes need to be integrated.

Complexes are also energy centers in the psyche, which have formed around our own individual experiences, usually negative ones. Complexes need to be healed.

Two of these energy centers that cause misunderstanding and conflict in relationships are the Mother Archetype and a Mother Complex. In this hub, I will give you my understanding of the difference in these two energy patterns, with the hope that you can sort them out in your own psyche and avoid some of the difficulties that occur when they are confused.

The Mother Archetype is one of the most influential and far-reaching energy centers in everyone's psyche, male or female, and it has both positive and a negative aspects. Therefore, we speak of the "positive mother" and the "negative mother."

Our own personal mothers probably represented both aspects to us as we were growing up, and that relationship -- between mother and child -- continues to influence our relationships, especial those with the opposite sex throughout our lives.

Those of us who had what Jung called "a good enough mother," recognizing that no mother is perfect, tend to have an easier time of it negotiating our way through relationships in particular and through life in general. Why? Because at an early age we learned to trust. We learned to trust as babies that our needs would be met, eventually if not instantly, by a person who often had to put her own needs aside temporarily in order to meet those of a helpless infant. For some mothers this is easier than for others depending on the mother's own temperament, her physical strength, and the kind of support system she has in place.

Some of us, whose biological mothers weren't "good enough," had mother surrogates -- aunts, grandmothers, sisters, nannies, etc. -- who helped to meet our childhood needs and thus helped us to learn to trust life. For others, those basic needs went sorely lacking at an age when we couldn't understand, couldn't verbalize, and couldn't meet our own needs. We still find ourselves, like the Ancient Mariner telling his tale of the albatross to whoever will listen, wandering through life looking for that mothering energy that makes us feel "at home" in our lives.

Because of this, we each have in our psyches a Mother Archetype which has both positive and negative aspects, but if it is "good enough," we can negotiate life and especially relationships with more or less ease. If it is mostly "negative," we find ourselves in a continual battle with life and with other people. We feel mistrated. We feel neglected. We feel that life isn't "fair." (Let's not go there today.)

For those people, who as children were not only neglected but activity abused, professional help is often required to find even the most minimal fulfillment as adults.

While we all have the Mother Archetype in our psches, only some people -- males -- can have a Mother Complex. Women may have Father Complexes, but not Mother Complexes. It is these two complexes which often cause perpetual difficulties in male - female relationships. The man is looking for "a mother"; the woman is looking for "a father." And neither is able to be a complete human being that can engage in adult behavior without falling into their respective complexes.

A Mother Complex has no positive aspects. It is a totally inappropriate adaptation to an unavoidable human situation. All babies come our of their mother's womb and many are nursed at their mother's breast. Girl babies grow up knowing they will someday be "like" Mother. Boy babies, on the otherhand, can never grow up to be "like" Mother, and at some level resents this. If a boy lives in a healthy family environment with both a Mother and a Father, then at a certain age (4 or 5 years old), the boy baby transfers his model to the Father and proceeds to grow up "like" a Father.

In many cases, for whatever reasons, this transference does not take place, and some males grow up wanting only to return to the bliss and comfort of the Mother's body that they experienced as babies. They cannot force themselves to deal with a world that is cold and often cruel. They will seek comfort as adults in different ways: 1) Some find a woman who is willing to play that Mother role for them and give "unconditional" love, at whatever cost to herself. 2) Some seek to become so powerful that they can demand whatever they want and not be refused by anyone. 3) Some give up the search completely and seek oblivion in a substance which will deaden them to their feelings and may eventually kill their physical bodies.

A couple of quotations from Bertrand Russel's THE CONQUEST OF HAPPINESS sum up the situation of a man lost to his Mother Complex, if he is a "victim of maternal 'virtue'."

"The one pleasure that he desires with his whole soul is that of being approvingly caressed by his mother, which he can remember having experienced in childhood."

"When he falls in love, he looks for maternal tenderness, but cannot accept it, because owning to the mother-image, he feels no respect for any woman with whom he has sexual relations."

We sometimes refer to this type as narcissistic.

If, on the otherhand, a male has been the victim of abuse by the mother figure, he turns more toward megalomania. What he wishes to be is "powerful rather than charming."

Another quotation from Russell describes this type of reaction:

"The typical unhappy man is one who, having been deprived in youth of some normal satisfaction, has come to value this one kind of satisfaction more than any other, and has therefore given to his life a one-sided direction, together with a quite undue emphasis upon the achievement as opposed to the activities connected with it."

For example, a business man whose goal is simply making money rather than engaging in activities he enjoys which will bring him a satisfactory income. Or an artist whose goal is to become famous, rather than to express himself through his artistic talents.

So, to bring this hub to a close before it gets away from me, here is a summary:

We all have a Mother Archetype in our psyches. It has both positive and negative aspects. As we mature, this archetype changes and hopefully becomes more positive as we learn to nurture ourselves and then others.

Males may also develop what is called a Mother Complex, which keeps them from functioning as healthy adult males, whether they become narcissicts and try to charm their way in relationships or they become megalomaniacs and use power to get their own way. Either way is destructive to a truly healthy male-female relationship.

In order to have a fully satisfying instinctive life, men must heal their Mother Complexes. Otherwise, they may become "successful" in the ordinary meaning of that word, but they are not likely to be happy. 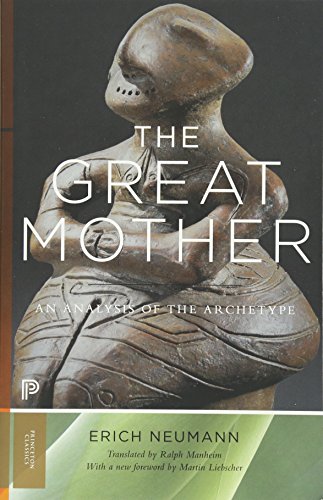 The Great Mother: An Analysis of the Archetype (Works by Erich Neumann (15))
Buy Now