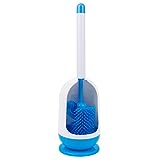 Stuck in the toilet bowl

P R E F A C E: Pam Babcock , 35, is the name of the Ness City woman whose bizarre story was sensationalized in the press and the internet worldwide as the woman who sat in the toilet bowl for 2 solid years. Remember the incident?

T E X T: This story began on the 27th day of February when Pam's boyfriend, Kory, 37 called Police to report that something had gone wrong with his girlfriend who prefers to remain seated on the toilet bowl where she had been for 2 years. At this juncture, Sheriff Whipple expressed surprise why it took Kory 2 years to report the matter. It was alleged that Kory failed to explain the reason why.

Findings of the police officer

The responding police officers found Pam sitting on the toilet seat, her sweat pants down to her mid-thigh. Whipple said that Pam was somewhat disoriented and her legs and muscles looked like they had atrophied. A closer look at the woman reveals that her skin had grown around the seat. A newspaper report dated March 13 quoted Sheriff Whipple as saying: "... medical personnel had to remove her from toilet bowl because she was bound to it by 'natural means' ". She was not tied. She was not glued. Her body was physically stuck to the seat

Pam prefers to sit glued to the bowl

Pam vehemently opposed the move to have her extricate from the bowl. She said she need no help, that she was okay and that she doesn't want to leave the toilet. Kory- Pam's boyfriend of 16 years- told KAKE news he tried to convince her everyday to leave the bathroom. "She had a phobia of coming out. Most of her fears from coming out is from her relatives. She doesn't want to see them". Sheriff Whipple voiced out Pam's refusal to cooperate with medical providers and law-enforcement investigators. He stated authorities don't know if she was mentally or physically disabled.

At last Pam was convinced

Your VOTE will be highly appreciated

Is this account true? What do you think of Pam?

The matter of reporting the incident late is surprising

James Ellis- a neighbor- said the incident after being played by media spread far and wide like wild fire. He said he had known Pam since her childhood and that he had not seen her for the last 6 years. He said Pam's mom died when she was still young; he believed Pam had an unhappy childhood. He knew Pam had once got a job outside her home but wasn't aware of the kind of work she did. The toilet incident doesn't surprise Ellis at all. It's the fact that nobody was called in earlier to report the matter surprises Ellis even more.

Findings: Pam had sat in the bowl for a month

Medical personnel estimated Pam had sat in the bowl for at least a month. She's now under the protection of a guardian appointed through the legal department of the hospital where she received treatment.

Kory was charged in court regarding Pam and the bowl incident. On Tuesday- July 29 (2008), a judge sentenced him to 6 months for a misdemeanor count of mistreatment of a dependent adult. He was granted probation- however- after Pam, the victim, asked for leniency.

Kory got another court sentence

Also that same Tuesday, Kory McFarren was sentenced a separate imprisonment of another 6 months for an unrelated charge of lewd and lascivious behavior for exposing himself repeatedly to a neighbor's daughter while having her bath in their yard in march 2008.

Kory McFarren is under the custody of the police department.