Why do men live alone?

Do men live alone because they really want to be alone, or because they lack the courage and strength to meet the demands of a relationship?

When we are young, and making babies, family is (or should be!) everything, so we naturally want to be together, Later in life, when the kids are grown and on their own, Mom and Dad can enjoy each other's company and share the things they can finally afford, like travel. But when one spouse passes on, the other has to choose between a lonely independence or another relationship, and the inevitable problems that go with it.
I don't think it's about courage or selfishness so much as it's about what is best for us and what makes good sense. A friend who lives down the street has his own house and a long-time girlfriend who also has her own house. Neither wants to marry, because they have both their independence and a dependable companion when they feel like sharing life. Since there are no babies involved and never will be, that seems like a sensible arrangement.
Not to mention that men who live alone can have pizza and beer every night!

I live alone because I want to live alone. I have spent much of my life as a loner. It does not bother me to have only myself for company. I have rich and deep relationships with my neighbors and my family. I also am the kind of person who needs my own space. I like living by myself because it helps me understand who I am as a person. Even if I found a suitable partner/spouse I am not sure I would like to live with them. I enjoy sleeping in my own bed. I enjoy my eclectic lifestyle. I go to bed when I want to and I get up when I want to. I have had relationships that were both positive and negative. What I have learned from those is that it is okay to alone. Not everyone was meant to be married, and that is okay too.

Loneliness is but a state of mind. You can live alone without being lonely. I often read, or hear, people say that relationships shouldn't take work. You should just be able to put them on auto-pilot and they will take care of themselves. On what planet is that? They do take work but shouldn't be so demanding that they become exhausting.

A relationship is like a garden that needs tending so that it isn't overgrown with weeds. Weeds have a tendency to choke vibrant growth out and a healthy relationship should be a growing experience, 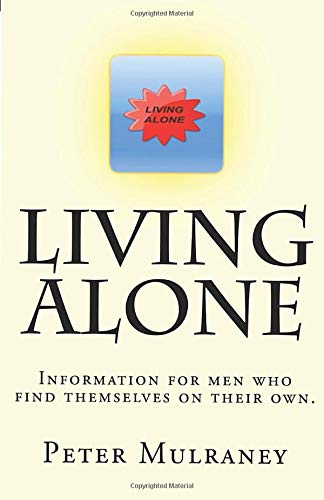 Living Alone: Information for men who find themselves on their own. (Volume 4)
Buy Now

I'm not sure that "lack the courage and strength" seems to fit this question. I believe that it is better to live alone than be miserable with another person. I have also learned that "settling" isn't a very good idea just to avoid living alone. If you do you may end up living with someone but being very much alone at the same time.

Right now I live alone by choice, not chance, and it has little to do with courage and strength and everything to do with peace of mind. I can deal with the demands of a "reasonable" relationship but not one involving the lack of trust, insecurity and suspicion. If those are part of the "demands" then leave me out of that equation.

I was divorced after just over 13 years of marriage and two children. There are no winners in divorce...only losers and the children normally lose the most. It was a heartbreaking process but marriage requires two willing souls thus there was no real alternative but to endure.
I spent the next decade living single never wanting to get into any real serious relationship which would again take me through that dreadful emotional process of divorce. I could not bring myself to the level of emotional involvement thus relationships came and went in my life usually at my choosing rather than theirs. I wanted guarantees. I finally got up the nerve to remarry in 1997 and it was a bigger step than the first time as I knew the possibilities...understood them well.
I have been happily married now for over 15 years and have no regrets as I have come to trust the one that I love. My ten years of single life was protective yet always a bit empty in places...an emptiness that I could not seem to salve no matter how I deeply I involved myself in the singles culture. I was numb but never at peace as I am today.

Loneliness is an intangible. It's in your mind.

(And this was all I got out of this buddy of mine. Plus a link to a specific song.)

I find myself living alone and perfectly content to do so 99.9% of the time. All the relationships I tried were with the expectations of having a partner that was equal in all aspects of life. But to my detriment they all turned out to be dependent instead of equal, and more of a liability than an asset, so my last and only option was (is) to live alone and enjoy the independence, solitude, and quiet times at my own leisure.

The other .01% is only in relationship to my pets, as my greatest fear is keeling over dead and there being no-one to rescue them.

We all should first learn to be self reliant before ever agreeing to sharing our lives with another person - and that goes for both sexes.

I believe people live alone because they chooset to. There are numerous reasons for one living alone, mine is by choice. After two failed marriages and broken relationships, I've come to the realization that I'm not cut out for living with somebody else other than myself and that's even difficult at times. Why? because I am too much of a perfectionist, moody, quickly agitated and a lover of my own space and my own dirty laundry. I've carried others baggage far too long and decided I would be better off carrying my own, thus living separate but still sharing is much easier. It's simply your place or mine for a sleepover and then homebound to each others home we go. Makes for a much simpler, cleaner, organized and peaceful life.

After a few relationships and a marriage of twenty-four years I simply know that living alone is the best way to keep a relationship uncomplicated and happy.

Living alone means I can do whatever I like MY WAY without irritating the woman I love. It also means that I don’t give her the opportunity to irritate me.

Let the British author and social critic, Adous Huxley, explain what I mean: “Familiarity breeds indifference. We have seen too much pure, bright color at Woolworth’s to find it intrinsically transporting. And here we may note that, by its amazing capacity to give us too much of the best things, modern technology has tended to devaluate the traditional vision-inducing materials.”

I don’t want to be alone and I am not afraid to meet – or at least try to meet - the challenges of a relationship. I thought I was happily married for 18 years, but for some reason my wife decided to elope with my best friend. Now that was a helluva knock. But a man has to face reality. Sh-t happens. Our children would like to see us together again, but they will eventually realize that what’s dead is dead and I am not Frankenstein.

After the divorce I have tried a second relationship. I honestly tried my best for two years. But trying at my age to meet the unreasonable demands of a woman with issues, is a waste of precious time.

I just met a new potential partner. I look forward to explore a new life with her. But, again, not willing to pocket any nonsense. There is many fish in the see.

The convictions of these men left me with the clear conclusion that every man knows whether they are voluntary alone, or alone because they don’t have the courage and strength to meet the demands of a relationship.

Of course, men feel offended when they are accused of 'lacking courage and strength' for anything, but as a seasoned feminist knowing that there is about seven women for each man on this planet, I dare to say that lacking courage and strength AND patience is in fact the basic reason why men live alone. Women are more complicated than men, they are more demanding, especially with regard to emotions, so why would a man saddle himself up with a woman (and children) if he can and may live alone and keep his bread buttered on both sides?

But this is a hub for another day. In the meantime, dear men, you may try to convince me that I am giving you a lot of stick.

However, the question is: What should be done? (For talk is cheep).

In my language we have a saying: “’n Boer maak ’n plan.” Best translation: “A cowboy makes a plan.”

Why do women live alone?

A Perspective on Loneliness