Mean Girls and How to Handle Them

Jen has graduated from St. Thoms Aquanis College in May of 2009 with a B.A. in Communications. She loves writing about relationships.

You remember 2004' Mean Girls. It's about a girl Cady played by Lindsay Lohan who goes to a new school and two friends Janice and Ian befriend her. Then one day when she sits with Regina George and her crowd a.k.a. "The Plastics," Janice and Ian make Cady play a game. They want Cady to be just like Regina's crew and try to tear her crew apart and report everything back to Janice and Ian. Janice and Ian want revenge on Regina and her crew because of what they did to her all through high school and middle school.

I will not give away the rest of the movie. I will only say that to anyone who was ever bullied, it can show viewers how cruel high school and girls can be. Some people many not want to watch the movie but people should watch it to actually be aware of the bullying that goes on in high school and even after high school.

So what does that movie have to do with me? I sort of had a similar experience. Not in the same exact way. It all started back in 2015 when I started talking to a Starbucks Barista. I was so excited because for a long time I thought he was cute and had no idea he liked me. So he asked me out cancelled, but we still continued talking. Then, we were supposed to go out for Valentine's Day, and he cancelled again. I was confused as to where things went he never explained himself, and he kept texting me and telling me how much he was into me. He also said he wanted to come over but I said I wanted the relationship first, so we were constantly fighting about getting things started. He would go into ghosting mood.

I had girls coming up to me saying things like "He's young for you, are you sure you want to go out for him?"

I would talk to them when I saw them we would laugh. Meanwhile, I had no idea what was getting done behind my back. I thought we had a mutual friend in common and I just made a new friend. I was very naïve at the time. When I left they would always say things like "It was good to see you, take care. Hope to see you soon."

Then, I got a text from him one night saying not to talk to his friends or hang out with them. He actually wanted to stop speaking to me altogether because of it. It was one of the hardest nights of my life.

It was so bizzare, people talk all the time that is how they become friends with people. I had no idea why they got upset with me. I am the type that I make friends everywhere I go and no one has a problem. I am usually an outgoing person, so I couldn't understand why people would get offended with me saying hi and talking to them when I saw them. It was too weird for me.

I eventually got a new job and ended up with a best guy friend he said he thinks the guy was secretive and did not want to tell me and wanted to keep me a secret. It ended up being that way.

I found out later on that that guy that I thought was Mr. Wonderful was actually the biggest player on the planet. Luckily for me I had good friends who helped me get over him but it was really hard at the time because he kept lying and was really secretive. It turned out that while he was texting me he wanted to come over and he thought I was pretty he was telling everyone that and he liked making girls argue. So he was a major player and liked to create rumors about people.

What about the girls? Well everytime I saw them around they would give me these icy glares. One I ended up working with and I tried to be nice to her and leave the past in the past but she made my life a nightmare. She would gossip about me and compete with me. She tried to take my friends away from me.

My friends kept saying "You don't need to be friends with her. Who cares if she is mean to you, or looks at you. Just move on."

Everything she did at the time made me insecure and I was intimidated by her. She was a Mean Girl and I was bullied by her. We never had confrontation but she was so much tougher than me that I was really scared of her.

I tried talking to her rationally and telling her I didn't want Mr. Starbucks. He came around and apologized eventually too but it was too late. I told her I didn't mean anything maliciously when I would talk to her in Starbucks. I just wanted to make a new friend because I generally am a friendly person and I am sorry if I offended her. She said she liked me and she didn't mind me sitting with her. She said he is like that with everyone and don't listen when he says things that he makes people fight.

We seemed like we were starting to get along when she went back to her old ways. One day I was having a conversation with her and she seemed annoyed that I was talking to her. What happened to our happy conversation the other day? Why can't she be totally upfront if she did not like me?

Finally she got a new job. Our mutual friend even got a new job. I ended up blocking everyone. I dated someone else. That was how it all ended. I stopped feeding into what everyone around me was doing. They wanted a reaction and the minute I stopped showing the reaction they wanted they left me alone.

I got back in touch with our mutual friend and he said "You guys don't have to be friends just stop talking about each other. Just leave whatever happened in the past." I showed him the texts that I got originally from Mr. Starbucks and he sent it to her and she left me alone after that.

It started off really bad but having a friend who really has your back can really help when someone is making your life a nightmare. They can give you the strength to move on and press forward and love you when you don't even love yourself.

How Do We Deal With Mean Girls?

Mean Girls are all around. They can be at your job, mutual friends, people you see on the street, etc. You can't escape them. There are ways to handle them:

1) Ignore them. They want to see a reaction out of you. They are mean for a reason. Maybe they have a grudge or unresolved issue from their past. Whatever it is the more you feed into it the worst things get.

3) Try talking to them nicely. See what the issue is about. Maybe they need someone to talk to. We all are wounded in some way and some people show it in anger more than just talking about it. That is where communication comes in.

4) Try talking to your friends about it. Don't hold these feelings in. Having a good support system can really help you out during a time like this.

5) Understand that this won't last forever. People come into your life for a reason. Maybe you met this mean girl to test your faith or to see things in your life that you didn't like in yourself. Sometimes when we meet toxic people it is because they have to teach us a lesson that we did not want to face. Then when we finally learn it they leave.

6) Try putting your negative feelings into positive ones. Take up a new hobby. Take a new class like cooking or painting if you always wanted to try that.

7) Understand that you are not alone. Many people get bullied when they are in high school and even out of high school.

8) Understand that just because you get bullied there does not mean that anything is wrong with you. Sometimes when people do mean things to other people it is generally how they feel about themselves. Try not to take offended but to understand where this person is coming from.

9) Talk to a proffesional. If you need to talk to someone then do so. Getting bullied can have effects on your mental health and self esteem. Talking to a professional can help.

Let's just try to get along

When you are dealing with a mean girl or bullying itself it can feel like it will never end but it does. To the ones who are doing the bullying stop and think about what you are doing to another person. Have some empathy. You would not like it, if it was done to you.

The bullying and mean girls can stop if we can learn to communicate and work through our issues. Sure we are not going to get along with everyone but there is no need to spread rumors about each other and make each other's life a nightmare. There is no need to give someone an icy glare when you see that person or be in competition to be someone. If you do not like someone just be civil. You could still have a conversation with someone, it does not mean you have to be friends with them. It just means you are a nice person.

Life is short and right now we need more love and kindness. We need more empathy. We need more honesty and open communication. If someone annoys us don't blurt out "I hate when you do that," respect each other and say "could you please not do that?"

If the world had more respect, love, open and honest communication, empathy, boundaries, etc. then maybe the rate of bullying would go down. Let's try making this world a better place!

What is the best way to handle a mean girl? 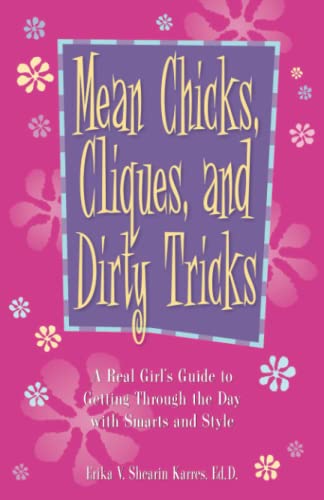 Mean Chicks, Cliques, And Dirty Tricks: A Real Girl's Guide to Getting Through the Day with Smarts and Style
If you have a child in high school and is dealing with a mean girl or getting bulled, then this is the book for her. It is an easy read all about how to get through high school and handle the mean girl with class.
Buy Now