Passive Aggressive Partner - This is How to Cope

Passive Aggressive Partner - How to Cope

If you are having an impossible time trying to get your head around why your partner persists on hiding their true feelings, preferring to let anger out in underhand, covert ways such as convenient forgetfulness, feigned misunderstandings, procrastination, feigned inefficiency, and/or silent treatment, you need to read on to learn how to deal with people with passive aggressive personality disorder.

What NOT to do

Don’t let your husband or wife's behaviour drive you to mutter sarcastic remarks in response. Two wrongs won’t make a right and when you stoop to a low level you lose the moral high ground. Rise above the provocation, be the bigger person and keep you head up high.

Resist the urge to compete with them by acting passive aggressive yourself – again don’t allow them to bring you down to their level. Their frustration with you competing with them will likely encourage them to escalate the passive aggression and, remember, they are the expert in this field (not you) so don’t even attempt to go there. (NB:This is easier said than done but well worth the self control on your part.)

As difficult as it is, don’t let them rile you. It is what it is but don’t allow it to steal all your joy. Rise above this adversity with positive thinking and do what you need to do to have the life you are perfectly entitled to enjoy despite their best efforts to thwart you. Heed what they say and submit to their reasonable demands (for not all their demands are unreasonable – often the real problem is that you are not able to mind read sufficiently to know what these mystery deal breaking demands are). However, don’t be too surprised when they move the goal posts or create new “unknown” dealbreakers. Remember, they probably do not want to change. 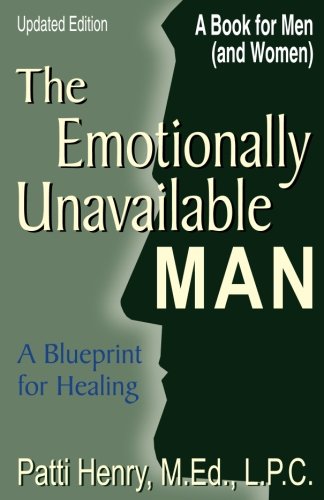 The Emotionally Unavailable Man: A Blueprint for Healing
Buy Now

What you should do.

If/when they want to talk, allow them to talk themselves out and do listen actively. Resist the urge to reason, defend and justify yourself and let them have their say. Don’t bicker. None of this will help in the long term and in the short term it only makes you feel more frustrated because you are unable to get through to them. If you do make concessions to them they will not hear you and your olive branches offered will not be acknowledged/taken up. So, again, just calmly call them out on their behaviour as you see it. This will let them know that their covert, secret anger is indeed out in the open. They may be angry at your calling them out on it, but what the heck, they were angry to start with!

Don't be afraid to have your say. Again, calm yourself first. Then, in an assertive manner, let them know your concerns and feelings, using I statements and by "fighting fair". Far too often partners of passive aggressive people bottle things up indefinitely which only quadruples the problems for the future.

Detach yourself and don’t bear a grudge. Don’t spend time on getting your own back on them. Let it be seen that their game playing is water off a duck’s back to you. Get on with doing things that bring you joy. Don’t let them completely spoil your life. Make sure you yourself are the one to decide on how you feel emotionally and don’t allow others to bring you down. For example, if they want to give you the silent treatment because you didn’t do “x” right, consider if there is anything you genuinely feel you need to apologise for and, only if so, pleasantly apologise and move on to doing whatever brings you joy in your day. Keep yourself busy and buoyant. They can only ruin your day if you let them. So, don’t let them. Detach yourself to save your sanity.

Be aware that when they do not themselves come up with a solution to an issue, it probably translates that they are not really invested in the agreed course of action if it was suggested by you. Don’t expect them to co-operate, even if they say they will at the outset. Better perhaps to ask them to come back to you at a mutually convenient time to let you know if they have an idea for solving the issue at hand. However don't hold your breath!

Accept that you cannot make them change. Sometimes they will make just enough of a change to have you thinking you have turned a corner and that things will continue to improve, and then almost imperceptibly the cycle begins again.

Decide whether or not you want to continue to contend with such behaviour for the long term. For some knowing what they are dealing with makes it possible for them to stop taking it so personally and detach. Let your spouse have their tantrums whilst you get on with your life without allowing it to control your emotions.

It can help to know that the problem is not you. It can help to know that your spouse would be acting this way whomever they were married to. Depending on the degree of the passive aggressive behaviour, weighting up good and bad points, the person on the receiving end of such behaviour can decide whether or not they want to continue to contend/cope with it. In making decisions about the future, do take into account the detrimental effects the PA behaviour can have on your physical as well as emotional health.

Why Do I Do That?: Psychological Defense Mechanisms and the Hidden Ways They Shape Our Lives
Buy Now

If your passive aggressive partner claims they are made to feel unheard or insignificant, you must objectively look within yourself to assess whether or not these feelings are totally unjustified or at least partly justified. Perhaps you are both passive aggressive to a lesser or greater degree and are bringing out the worst in each other. In these instances working together to be more assertive could well help, but of course there are no guarantees.

It's important to be self aware and acknowledge the part you yourself have played in their Passive Aggressive Dance - after all it take two to tango and in trying to defend yourself and claw back a little ground in the face of the objectionable PA conduct, is it possible a few of their traits could have tempted you to repay a wrong or injury suffered by dishing out like harm.

Please do not be overly hard on yourself if you think it could be the case. It is only natural to try to fight fire with fire but two wrongs won’t make things right. If this rings home for you, it's worth considering doing some work together on combating PA behaviour. Yes, they may have heaps more to combat, but getting your own house in order at the same time as them could well reap benefits.

In these circumstances you might suggest working through a book to your partner from a non-threatening standpoint by saying that you feel you both need more self awareness to be able to bring out the best in each other. The book 8 keys to Eliminating Passive Aggressiveness (pictured below) by Andrea Brandt may be of help in this scenario and is also available in audio and kindle format.

A Useful Publication - Rated 4.5 out of 5 Stars by Readers

Life with PA men or women can be an almighty test. The above suggestions can help you to cope with living with a PA spouse and help you stop them taking away all your joy in life.

However, you must also take into account the futility of thinking you can change them. You, or a third party, just might be able to point the way to change, but if they are indeed capable of change, it is up to them and only them to change them self. Ultimately you my elect to change yourself (the only person you can change) and the result may be you handle things in a different way, or you end the relationship and move on.

Important: If you experience, or feel in danger of, physical harm from your partner, you are advised to seek local qualified professional advice as soon as possible.

Passive Aggressive Partner - Why do they act that way and what are your Options?

The above link can help you gain insight into why your partner behaves the way they do and looks at the importance of not allowing your partner to drain all the joy from your life.