Relationships Ending: The Five Stages of Grief After a Break Up 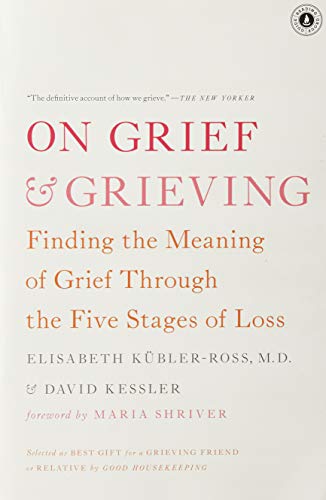 On Grief and Grieving: Finding the Meaning of Grief Through the Five Stages of Loss
Buy Now

Of course, the way that we process the breakup of a relationship isn’t quite the same as how we would process a death. With a relationship, the other person is still there for us to interact with (at least theoretically; we may not actually be speaking to them). This complicates the traditional grief process because ongoing interaction can change the dynamics of the relationship and cause new patterns in dealing with the loss. Additionally, the possibility of getting back together with our romantic interest creates difficulty with some of the stages of grief. Nevertheless, as we go through the ending of a relationship, we will eventually go through all of those same five stages of grief.

Having a good understanding of what those five stages of grief are can help you to better understand the emotions that you are experiencing when you go through the breakup of an important relationship. Knowing some of the things that commonly happen or feelings that get felt during each stage can help you to understand that what you are going through is normal and that eventually it will pass. And being able to see what stage of grief you are in can help you to better process the loss so that you can grow from the experience (painful though it is) and eventually be better in future relationships because you’ve processed it all through.

So, let’s take a look at those five stages of grief. They were originally outlined by Elizabeth Kubler-Ross but I’m looking at them here through the lens of relationships and am adding information from my own experiences with this process as well as from an amalgamation of many different books on the topic that I’ve read over time. Any book on grief or the grief process of relationships will give you additional insight into these five stages:

1. Denial. It is often said that the first stage of grief is denial. Whereas you may move back and forth between the other stages (and this one as well) you basically almost always start with this one. It’s the stage of not being able to really admit to yourself what is going on. And while it’s definitely a part of the grief process people go through with death, it’s probably even more integral to the grief process of a relationship ending.

This stage is that stage in a relationship when you kind of know that things aren’t quite right anymore but you don’t want to deal with it. You hope that it’s just a rough patch. You don’t want to ask if you’re being cheated on because you’d really rather not know right now even if you think that maybe you should know. You look at the happy moments and think, ‘it’s okay, things are fine’.

We deny that the relationship is ending for a lot of reasons. Sometimes relationships really do just have rough periods and you can’t really know what’s going on until more time has passed. Sometimes we’re just too afraid to admit that things need to change so we keep ignoring the problem for as long as we can. Sometimes we have deep-rooted childhood issues related to abandonment that make it emotionally too terrifying for us to face the end of our relationships so we cling on.

Even after you and your partner have finally admitted out loud that there is a problem, there could still be an ongoing period of denial. It’s that period when you’re still talking and trying to work things out. It’s that period when you’ve stopped talking but in your mind you’re hoping that he or she will call and it will eventually get resolved. You may come back to this stage again and again as you go through the grief process depending on how much you interact with your ex. But the biggest stage of denial comes at the beginning when you’re trying to fight off the relationship ending in the first place.

Learn more about feelings of denial over a relationship ending

2. Anger. Anger is a stage that we all have to go through if we’re going to process our grief over the loss of our relationship. Unfortunately, a lot of people are really terrified of anger (both their own anger and the anger of others) so they refuse to acknowledge this part of the process. Failure to allow yourself to feel your anger feelings can result in never actually completing the grief process and therefore being unable to move on. So it’s important that we acknowledge our anger over the situation.

If you’re asking yourself who you’re going to be angry at, the answer is a lot of people. You’ll definitely be angry at your partner for not doing whatever you wanted him or her to do to make things right. You’ll probably be angry at yourself for your own mistakes in the relationship. You may be angry at God or the universe or life itself because things had seemed so good and now they’re not. You might even be angry at other people in your life and people from your past – angry at your parents for whatever they did that made you incapable of making this relationship work, angry at the friend who told you your husband was cheating or the friends who didn’t, angry at whoever happens to be around.

This anger can be scary but it’s a very real part of the grief process. The important thing is to acknowledge the anger and deal with it in ways that are safe and sane. Don’t be self-destructive. Write it out in journal entries and letters that you don’t send. Work with a counselor. Get anger management therapy if you need it. But don’t repress that anger or it’s just going to come back and bite you later on.

Learn more about feelings of anger over a relationship ending

3. Bargaining. Another stage of grief that we go through when we experience any loss is bargaining. In the case of a death, we try to bargain with God or whatever greater spirit we believe in to try to make the big problem go away. We may also do this in the case of our relationship ending but there’s also a good chance that we do bargaining with our partner and bargaining with ourselves. This is typically considered to be the third stage of grief but it may come before the anger for a lot of people as they try to move out of their denial and to work things out with their partner.

Sometimes bargaining actually works. Sometimes you can actually find constructive ways to reach an agreement with yourself, your partner and / or your god to change the situation so that you can still be in a relationship. But most times it is just part of the process that we go through as we learn to deal with the fact that our relationship with someone is coming to an end.

4. Depression. After all of the denial and the anger and the bargaining have been done and we realize that things really are starting to end, we become depressed. We fell helpless and powerless and overwhelmed with sadness about the loss that we are experiencing. We feel like we are never going to meet another person who makes us feel as good as this person did. We feel like we’re never going to be as happy on our own as we were with that person. We feel like things will never be the same and it makes us feel sad.

This is the time that it is most important to make sure that we are taking care of ourselves. We need to get enough rest because this period of the grief process is particularly tiring. We need to eat right, exercise and try to stay healthy. We need to surround ourselves with supportive friends, people who love us and make us feel good about ourselves. And we need to force ourselves to go out and do things that interest us even though this feels like the last thing that we want to do.

Even as we do all this, we need to acknowledge our depression. We need to admit to our emotions. We need to cry. To deal with loss, we have to feel the terrible pangs of sadness that come along with that loss. We need to say to ourselves and to others that we are sad and that we don’t know how long we will be sad but that eventually we won’t be sad anymore. Depression is a powerful emotion but it is only an emotion and it will eventually pass.

5. Acceptance. Believe it or not, at the end of all of this, you will eventually reach a day when you have accepted the situation. No matter how many times you passed back and forth between the stages listed above, you will one day find that those stages are finally done. You will think of your ex or even run into him or be friends with her again and you will no longer feel angry or sad. You will no longer be trying to fix things or wishing that things were different or trying to get back what you once had or blaming the other person for things going wrong. You will have accepted that things were the way they were, the situation ended as it did, you grew as a person and it’s all okay. It feels like you will never get to this stage as you go through the trauma of a breakup but eventually, believe it or not, if you’ve dealt properly with the other four stages of grief then you really will get to this one. Hang in there!

Coming Apart: Why Relationships End and How to Live Through the Ending of Yours
Buy Now

Which is the Hardest Stage of Grief to Go Through?