Find all you need for a divorce party on this page. These divorce party ideas include themes, decorations, favors, pictures of divorce cakes and gift ideas.

Why have a divorce party? This party idea isn't for everyone. The traumatic experience of a divorce leaves many with no cause to celebrate and in no mood to party down. That said, divorce parties are absolutely the right decisions for very special people. If you're one of them, start planning your event here.

Table of Contents - jump to section

The very fact that you’re thinking about throwing a divorce party is a sign that the idea is right for you. If you think this might be over-the-top, consider the reasons people throw divorce parties. As you begin to brainstorm divorce party ideas, consider these eight benefits of the party you are planning:

1) Giving a party is the perfect time to thank friends and family members who were there for you and helped you reach this day. Just as all of your major life events are shared by your favorite people, the finalizing of your divorce should not be an exception. People who care about you often don’t know what to do or to say when your divorce comes through. The divorce party will give your guests the opportunity to express their support for you in a relaxed, welcomed atmosphere.

2) A gathering of friends at this time will emphasize just how many wonderful people are connected to you with love. The event will surround you with warm, comforting hugs just when you need them the most. The day your divorce is final is not a day to be alone.

3) The party will give you a happy, smiley faced, future memory when your mind wanders back (as it will) to the day your divorce was final. You can choose to have a happy memory by planning your divorce party now.

4) The party is your opportunity to vent and to rant however you please. It is a safe environment to release the floodgates on all of the deep seated emotions you have accumulated during your divorce.

5) Divorce parties are the events which bring closure to the divorce process. Having a party when your divorce is (finally!) final can be like a huge sigh of relief for you and for all of your guests. The party marks a major milestone turning-point in your life's direction.

6) Your divorce party can mark the turning-point in your marital status. It is the event that can formally send your spouse to ex-spouse-land and crown you with your new single status.

7) Having divorce parties has become the new rite of passage. If you don’t have one, years from now you just might regret your decision.

8) This party can be the jump-start and the send-off for the next phase of your life.

What's your opinion: Is it OK to have divorce parties?

There are only two rules for divorce parties:

“Don’t invite the ex” used to be on the list for divorce party ideas until joint divorce parties set a new trend. Certainly this isn’t the right idea for most divorced couples, but billionaire Charles Bronfman and his ex-wife, Bonnie, threw an extravagant party for themselves that rated a divorce party article in The New York Times and placed the joint-divorce-party idea front and center.

The Bronfman party brought a sense of respectability to what had been publicly viewed as something only for rockers and movie stars, e.g., musician Jack White and his supermodel ex-wife Karen Elson.

The Divorce Party: A Novel

Go read dozens of rave reviews for this great novel and click to look inside for a preview. This makes a great party favor!

when you start to accumulate divorce party ideas, you'll notice that choosing the right location is significant, because the location sets the tone for the entire event. If children from the divorce are living in your home, your home is off-limits for the venue. Your children are not experiencing the same emotions that you are and should be kept totally away from the party and the planning.

The home of a friend can be a great location for a small group wanting privacy. Restaurants and bars are also perfect places to throw parties and most establishments will have private rooms available if you don’t want to party in the public eye. A picnic ground with a campfire might be just the place to have a roast for your divorce party and simultaneously burn old love letters, pictures and mementos. Some ex-brides even throw the wedding dress in the bonfire.

Need some great ideas for themes for divorce parties? Try these:

Divorce Party Planners – These popular ideas are from all over the U.S.

Then there's the 'Baby Shower Divorce Party' theme, made famous by Kim Kardashian upon divorcing her second husband Kris Humphries.

Kim Kardashian combined her divorce party with a baby shower on June 2, 2013, as her divorce was (finally) finalized from basketball star Humphries.

The multi-million-dollar wedding and 72-day marriage had been dangling in divorce court since October 31, 2011. Now resolved, it came within weeks of Kim’s delivery of a baby girl with new romance (now husband #3), rapper Kanye West.

The Baby Shower/Divorce Party was announced with lavish invitations which were music boxes playing a lullaby.

There's also the 'Divorce Anniversary Party' for those who need a little more time to enter the celebration phase of their new single lifestyles.

Katie Holmes received her divorce from Tom Cruise in less than two months after she filed papers in 2012.

A year later on the one year anniversary of the divorce, Katie threw a lavish divorce party on the July 4th weekend at a posh Manhattan hotel.

Grazia magazine reported that the event was for all of Katie’s friends “to thank them for their support throughout a momentous year.” 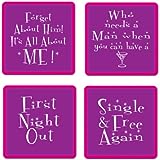 These coasters have great sayings. Click to look at closeup picture.

The selection of divorce party decorations and favors has mushroomed in the past few years due to increasing demand. There are invitations, divorce cards, and even wrapping paper made especially for this milestone event.

There are divorce party favors and decorations for every personality and you are sure to find the ones that make just the right statements for you. Just looking through the online party catalogs can be a party in itself and is a guaranteed, amusing experience.

Pictures of divorce party favors, cards and invitations that you find online can also be printed from your home computer and used to decorate the party tables and the party room. (Save a few for your party scrapbook, too!)

More than anything, the decorations you choose will say to all that you've been through a lot, but have not lost your sense of humor.

People who bought this for a party loved it! Go read the reviews.

And don’t forget to look for a stellar divorce party favor to use for a table centerpiece.

When you are choosing your party favors, you will also find divorce party games. Games are a great way to get the party started.

You can find dart boards printed with a picture of your ex, ex-spouse piñatas ready for bashing and the best-selling, divorce party game: ex-spouse Voodoo dolls.

Have a divorce Haiku contest; this is always good for laughs. A Haiku consists of three lines, as follows:

A custom which is trending in England is a ‘trash the wedding dress’ game. This photo is from a real divorce party game and the party was combined with a weekend camp-out.

Let participants make a speech, read a poem, or sing a song. Whatever agenda you plan, be sure to include the Champagne or sparkling cider toast. Your marriage probably began this way and it is a symbolic way to close this epoch in your life.

Offer your guests the opportunity to give a toast and you’ll be rewarded with fond sentiments as you move forward in your life journey.

This toast to you is a fabulous way your guests can say: “You’re good to go – now on to the next chapter in your life story!”

You can also have divorce party games which include taking turns drawing famous quotes about divorce and divorce poems from a hat and reading them out loud.

Your local bakery probably has a lot of ideas for divorce cakes. Of course, you can always bake your own, too. Here are a few ideas to get you started:

How To Make Divorce Fun

"This book offers hilarious and real world advice for people facing the horrible tragedy of divorce. Don't just survive divorce; have fun with it!" This is the perfect divorce party gift idea for someone with a sense of humor. Click to look inside and connect with the author's attitude.

This is the book that can turn her life in the right direction:

Getting Past Your Breakup: How to Turn a Devastating Loss into the Best Thing That Ever Happened to You

This is a best seller, with rave reviews from Publishers Weekly. It is full of inspiring stories from real divorces. Click to look inside the book and see if this is the right one for you or to give to a friend.

And this is the perfect divorce party gift idea for the woman getting divorced after age 40: 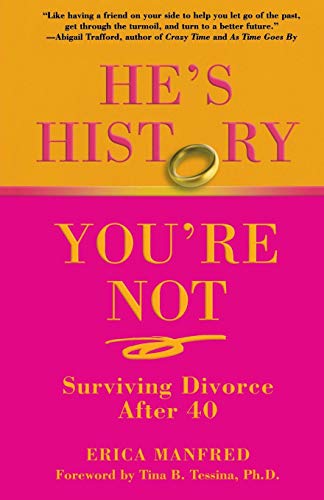 He's History, You're Not: Surviving Divorce After 40

"A savvy, girlfriend-to-girlfriend guide to what to do after your marriage ends." Don't you just love the title of this book? You can click to preview a portion and see that the book does live up to its name.

The musical 'Divorce Party Las Vegas' opened at Bally's and is now touring the country. If it's featured near you, start your party with front-row seats for the live performance. Here's a preview video: