The Epidemic Of Cheating

The Epidemic Of Cheating

The other day I was out shopping with my daughter when I over heard an employee talking to her co worker about her husband running out on her with another woman.

I felt her pain and I wanted to reach out to her letting her know that she wasn't alone. She was very angry to the point that she was looking for the both of them and wanted to kill them and especially the other woman. I told her that it took two to dangle. She said that she was married for 11 years and they were both Catholic and they didn't do those things. She was hurting.

Among the people of God we are justifying leaving our families for another woman or man when in fact the bible tells us that it is sin to commit adultery. Unless infidelity is in there. But today it is happening way to often and we aren't taking our vows serious enough. We are sending the wrong message to our next generation. It isn't ok and is it really worth all that?

This is happening more and more within the family circle. Men and women are leaving their own families for someone else's family. Even after they have been in a relationship for many years. They don't seem to care about the ones that they are leaving behind.

They only care about the one that they are now with.It is so sad that this is going on so much today, so much so that it has become an everyday thing for many. Is it really worth it?

To leave a wife and her children to take care of someone else's ? Or a relationship that you have long history with? These are relationships that were good and there is no excuse for it. I am talking about the couple that are married for a lot of years and they are best friends, but along comes another woman or man and all of a sudden the history with this person doesn't matter anymore?

What about those vows that you took on your wedding day? That means nothing?Worse yet when there are children involved what are they supposed to think? Daddy or mommy doesn't love me anymore?

My God it isn't ok, you need to ask your self why do that to a family that you were responsible for?

My own children don't believe in marriage anymore, that is the generation today and why because dad or mom cheated and left their parent for another person.Come on cheater is it really worth it?

Another woman crying while she she speaks to me, she tells me that she loves him and she doesn't want another man. They have been together for over 20 years a very happy relationship, a lot in common... she calls him her best friend. But he leaves her for another woman but not only for another woman but a woman who has four kids of her own. What is he thinking? How stupid can that be. I am sorry for those children when their mother can go and break up a marriage like that.STOP IT! STOP your cheating!!

The grass isn't greener on the other side in fact you will have problems in that relationship too. It started out as a lie how can that be condoned or acceptable?

I do believe that the children are being hurt from both parties because of ones choice to seek out their own happiness or even think that it would be better unless your coming from a very bad situation and you tried to make things work out then maybe just maybe that would be different, but get a divorce and then start a new relationship.

Don't set a bad example to the kids and especially to God who you spoke your vows before Him.

Dealing With A Cheating Spouse 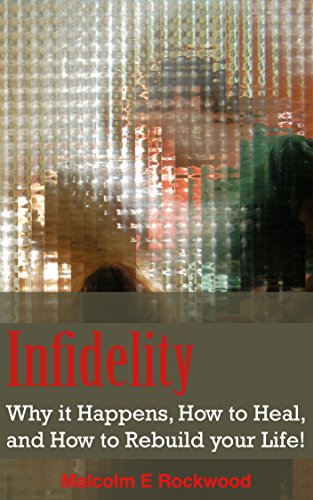 Infidelity - Why it Happens, How to Heal, and How to Rebuild your Life!
This book offers ways to help you cope and deal with this much faster. You've got a life to live and with this book the author wants you to get back to it!
Buy Now

What Does The Bible Say About Adultery? Five Important Lessons

Stop The Epidemic Of Cheating

Cheating is wrong and it has to stop there are to many life's being hurt here and all for one person's selfish reasons and for the person to get them self in the middle should never be respected in the first place.

Every relationship should be worked out if there is abuse or if one commits adultery then the one that it was done to, isn't responsible for the action of the one that did it. You are free to divorce when it comes to infidelity and abuse.

I was cheated on two times and what I can say to what it entailed... it hurt my whole family, not just me. I have witnessed the woman who was willing to sleep with my husband at the time "get more respect" then what the woman which was me.. gets as being the (mother of his children) and also for putting a lot of time into this marriage for many years of going through hard times and good times together. The new woman has so much respect which makes me wonder why the world is the way it is today.

God hasn't changed. He is the same today as He was yesterday so even though people's morals have changed in the long run you lose for making a decision that would effect a family as a whole.

You who are stepping into a relationship where the Lord said let no one come in between what He put together and giving this person the alternative to leave their spouse for you.

One day you will be held accountable, for you are responsible for a break up of a marriage in a family. You should of never stepped in where you didn't belong in the first place. So you are just as guilty as the cheating spouse. Stop being a cheater and stop being so selfish.

What Does The Bible Say?

What the Bible Says About Adultery (After the Affair Book 6)
If you want to know what the Bible says about these situations and how to handle them, you can find what you are looking for here. You will find that even giants in the faith had issues with adultery and how to handle it. The pattern of lying to hide adultery and adulterous situations is more common than you may have imagined. Trickery and deception are not something limited to the modern church. The early fathers and mothers of faith found themselves dealing with these situations which are common to human relationships. Adultery can be overcome and people turn their lives around. You will gain new insights concerning how the patterns of trickery and deception are not new. You will see how Bible characters dealt with trickery, lies, double standards and deceptions within their own families. The story of these peoples lives were given to us to learn from. Learning from how they dealt with situations similar to yours will give you hope and new ways of dealing with what seemed to be a hopeless situation.
Buy Now

What If Your Spouse Cheats? Todays Christian Woman

Infidelity Is Never Going To Be A Painless Situation:

If you are in love and thinking about marriage please make it a serious decision. Never go into it blind. Take a lot of time and real thought into it before going to the alter.

Make it a lifetime commitment and be willing to take those vows serious.Because if you don't take it serious you may be in a situation where it is a painful one and your not the only one being hurt by this make this a very important choice so that in the end no matter what you are going through with God's help you both will get through this together.

Make up your mind not to let anyone or anything come between you and your spouse. Make a difference and change the world by being a good example at home and in your marriage.

There Is Always Hope. If your marriage has ended because of infidelity no matter how dark and gloomy things are today. There is a light at the end of the tunnel.

You may not see it now but it is there. Being a survivor to being cheated on. Not once but twice, today I can honestly say that I am a better person for it.

Not because of it but because the Lord took that what was bad and hurtful and turned it around for good. Not only for me but for all involved and especially for my children which is the most important thing to me right now.

Would you want to know if your spouse is cheating?

The seventh commandment God gave His people was, “You shall not commit adultery” (Exodus 20:14).

Hebrews 13:4 Let marriage be held in honor among all, and let the marriage bed be undefiled, for God will judge the sexually immoral and adulterous.

It was also said, ‘Whoever divorces his wife, let him give her a certificate of divorce.’ But I say to you that everyone who divorces his wife, (except on the ground of sexual immorality), makes her commit adultery, and whoever marries a divorced wo