The World of Suzie Wong - a Movie and Book Review.

The World of Suzie Wong

The World of Suzie Wong

The World of Suzie Wong, a poignant, bitter-sweet love story between an English painter and a Hong Kong waterfront 'yum yum girl', a prostitute with an innocent heart of gold.

It is post-war Hong Kong, bustling with the immense wave of Chinese refugees from the mainland after the Communist takeover by Mao. Wong Mee-ling has managed, at the age of 17, to persuade her guardian, her uncle, to send her away from Peking to live with his daughter in Hong Kong. Unknown to him, his daughter is a prostitute.

Hong Kong has just been released from the Japanese occupation and money is scarce. Many girls are illiterate. With three million people in the tiny colony one has to do what one must to survive. .Prostitution is the only way to eat every day. This is the world Suzie has landed in.

The original printing of 'Suzie Wong'.

Wong Mee-ling, at 17, has been sexually abused by her uncle since puberty, and realises that with no virginity to offer any prospective husband, she has no marriage prospects. She learns from her cousin that prostitution pays a lot more money than the meager wages she earns as a seamstress, so she makes her cousin teach her how to please a man.

After a few years and some adventures in her job, she comes to work at the Nam Kok Hotel in the Wanchai district, a reputable cover for a brothel. Her saucy, piquant beauty soon makes her the favorite of the American and British sailors.

Her kind heart endears her to the other workers at the brothel. In fact, all the prostitutes at the Nam Kok are close friends, caring and covering for one another. They have an honor code that they do not poach one another's 'boyfriend'.

This is Suzie Wong's world, the world of the Hong Kong brothels, of kindness and friendships, of loyalty, of the unstinting helping hand, of desperate poverty. Throughout the story, the girls play their favorite song in the jukebox, the poignant 'Seven Lonely Days'.

Most of the girls think of themselves as 'virgins', for their minds and hearts belong to themselves, inviolate, untouched by their customers. Prostitution is just a job if you are desperately poor and there are no jobs to be had.

Prostitution is semi-legal at this period. The girls have to have weekly medical checkups and must present their paper clearance before the manager at the hotel allows them to work. And they pay tax on their earnings, making prostitution an accepted profession.

Robert Lomax's story is told in the first person. He was an English ex-soldier who had gone to Malaya after the war to try working in a rubber plantation. When he discovers he has a talent for art, he decides to take a year off to paint in Hong Kong, supporting himself with his savings.

Penny-pinching takes him to rent a room in the Nam Kok Hotel, which to his amusement he finds is a brothel. He befriends the girls there and genuinely loves them with their simple innate goodness and their hearts of gold. He decides not to sleep with any of them so as not to spoil their friendship. But he frequently chats with the girls at the bar where they pick up customers. All the girls love him.

Before he came to the Nam Kok, he has met Wong Mee-ling in a ferry. She pretends to him that she is the daughter of a rich man and is a virgin about to be married. She disappears before he can can further the acquaintance.

A few days into his stay, he discovers Wong Mee-ling with a sailor, and she finally admits she is not what she told him. And that her name is Suzie Wong.

Robert and Suzie grow to love each other, but she cannot give up her job because she has a baby son. She is saving for his education 'so he will not have to be a coolie when he grows up'. Robert is unable to support them, and keeps off Suzie because he cannot share her and she cannot stop working. Her mother love will not give up the dream for her baby.

The baby is chronically sick with a cough, most probably from the crowded conditions under which they live. Unbeknownst to Robert, Suzie has tuberculosis. She successfully hides it from him because they do not sleep together.

Suzie loses the baby one night to a typhoon. The flimsy structures they lived in had collapsed and been washed away in a mudslide and the baby is found dead. A sorrowful Suzie performs the Chinese burial services for her baby and then informs Robert that she does not have to work anymore.

She moves in with Robert but refuses to marry him, under the pretext that she would ruin his name and his chances of becoming accepted as a famous painter. Abhorrence of miscegenation is alive and well in British Hong Kong in the 1950s. But she makes Robert her object of devotion and they are very happy together. Robert delights in reading to an insatiable Suzie, who is illiterate and a fast learner.

Robert meanwhile is becoming well-known in the art world and starting to make good money. Dealers in America and England have become interested in his work, which centers around scenes of Hong Kong and portraits of Suzie.

The Stars who played Suzie Wong

Robert takes Suzie on a short trip to Macau and there she marries him. On the boat home Robert nearly loses Suzie, whose advanced TB causes her to hemorrhage. Some string -pulling by the boat's doctor gets her into hospital as soon as they land in Hong Kong, and Suzie hovers between life and death for a few weeks. Suzie's best friend at the Nam Kok reveals to Robert that Suzie had been refusing to marry him because she knew she was dying.

With transfusions and good nursing care Suzie pulls through.

When Robert is asked by an art gallery in England to come and show his work, he throws caution to the wind and brings Suzie, who has always wanted to see England, Princess Margaret and the Queen. Racism and xenophobia are rife in England, but Suzie, with her naïve good humor and innocence, shames her would-be scoffers and becomes a celebrity in her own right. When Robert is led to believe in his own greatness by the lionising public, Suzie wakes him up and he thanks her for stopping him nearly becoming a fool.

Return to Hong Kong and Home

Robert and Suzie return home to Hong Kong. When all the Nam Kok girls have welcomed them home and have received their presents from Suzie, Robert gets them ready to move to Japan for the foreseeable future. Suzie needs to rest and recover from her tuberculosis in the mountains. She has postponed the cure prescribed for her in order to accompany Robert to England.

On the night before they leave for Japan, Suzie is so unsure of the trip happening that she goes to sleep with the tickets under her pillow.

The movie was a big hit in the 60's. Cinema goers loved it because the plot is both simple and complex. Two very different, lonely people thrive in their love despite all odds. The movie put Hong Kong on the map, and even today there are many night clubs and bars named after Suzie Wong. This simple, tender love story spawned two stage productions, a hit movie, two book sequels and a 2006 ballet by the Hong Kong Ballet company called, simply, 'Suzie Wong'.

Where are they now?

What are they doing now?

All three women were pioneers of Asian actors in the west when roles were few and far between for Asian actors..

Both Tsai Chin and France Nguyen played Liat in South Pacific, Tsai Chin in London's West End and Nguyen in the movie. And again both played Suzie Wong on stage, one in London and the other on Broadway with William Shatner. They were also both cast in Joy Luck Club in 1993.

Nancy Kwan declined a role in Joy Luck Club because producers would not remove a line that called 'The World of Suzie Wong' 'a horrible racist film'.

All three stars are still acting and keeping very busy in their various second careers. 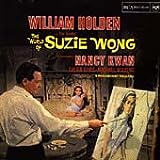