How to Get Revenge

Reasons to Get Revenge

The list of reasons why you might want to get revenge are endless, but if you are reading this I am guessing that either you are simply curious as to the content of this article, or you already have a person, people or company in mind that you feel have damaged you in some way and deserve punishing.

Some of the main reasons you may wish to get revenge are as follows:

1) A Husband, Wife, Boyfriend or Girlfriend has been unfaithful to you.

2) An ex-partner has told lies about you to others, inferring you were the cause of all problems in the former relationship, whilst they were simply the victims.

3) Your neighbours are noisy, rude or inconsiderate towards you.

4) A fellow employee is "bitching" about you behind your back, or generally making your working life day to day unbearable.

5) Your employer has found a way to dismiss you , which although unfair, has made it unlikely you will be successful in any case against their company.

Whichever category your revenge need falls into, most of the following top tips can be used to give you a great sense of satisfaction, and a feeling that justice has finally been done, or at least you feel much better about the situation, especially knowing that some of your frustrations have been vented, and wrongs put right. 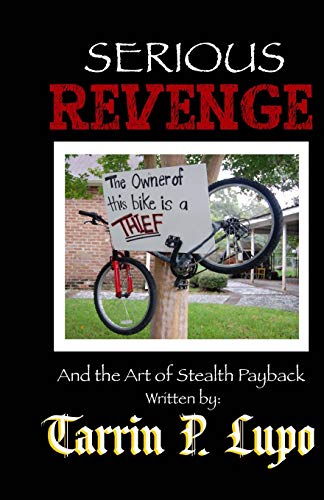 Serious Revenge: And the Art of Stealth Payback
Buy Now

1) Assuming you know the vehicle your "target" drives, then using a suitable implement, or rubber gloves, get a generous handful of dog poo and squidge it firmly under the door handles of the vehicle. I shall leave it to your imagination what happens when they next go to use the car, Yuk!

2) Similar to number 1, using dog poo again, force a generous amount into the air vents at the top of the bonnet. This will merrily waft through the interior of the vehicle next time the heaters or fans are switched on.

3) Block the exhaust pipe of their vehicle with a large potato. This is an old trick, and will prevent the vehicle starting. You would be amazed how long it takes for most people to realise why their vehicle will not start up though, and by the time they do they have often already called out a mechanic before the cause of their problem came to light.

4) Wait until the target goes away on holiday, then put a load of water through their letter box using a plastic bottle, watering can etc. Follow this with a generous few handfuls of fast growing grass seed and await their return!!!

5) Fill in every coupon, online form etc you can find that is likely to result in junk mail. Use their name and address for delivery. If you do this correctly they will have piles and piles of junk mail arriving on a daily basis virtually forever. If you are really vindictive, and you know your target is a married man, then you can also ensure that as many lingerie, "seedy" and gay magazine type catalogues are included in the mailings sent to them. Look in the back of national papers for adverts that will give you ideas, and who will allow you to sign up for free catalogues.

6) Another old idea, but if you do have access to a key to their home whilst they are away on holiday, then try dialling the Australian speaking clock from their phone and simply leaving the phone off the hook until they return from their holiday.

7) Try to obtain a picture of your target, and create an advert that you can place on notice boards and in phone boxes advertising their dubious "services", and including their telephone number.

8) Write a hub article that states exactly what this person, company, etc did to you, but only use their first names. If you include your picture, actual first names of people who were involved etc, you are unlikely to be in a position to be prosecuted for libel, (especially if you can back up the facts with evidence or witness statements), but anyone who knows you, the company or the first names involved, will quickly work out exactly who the feature refers to, and your side of events is there for the whole Internet to read.

9) Scatter bird seed all over their vehicle in the middle of the night, so that by the time they wake up the car has had so many feathered visitors that it is literally covered in bird S**t from boot to bonnet.

10) Phone up loan companies using the target's name and phone number. Many of these loan companies, or brokers for loan companies, are virtually impossible to get rid of and will keep phoning them for many months afterwards even when told multiple times that a loan is not required.

11) If you have a key to the target's home then try turning up their heating to maximum and then putting superglue on the switch. This is especially effective in midsummer.

12) Placing a handful of pebbles within the wheel trims of a car will cause significant damage when the car is driven.

13) Obtain a free sample of hair shampoo or conditioner by approaching a company online. Carefully empty the majority of the product from the bottle and replace with hair removal cream. Using a scan of the manufacturers letter headed paper (erasing the text), type a new letter offering this sample to your target and suggesting that for best effect they leave the product on for at least ten to fifteen minutes. The results will be very satisfying.

14) Send your ex a picture of you looking extremely happy with your new partner, nothing will bug them more!

15) Get a roll of cling film and surround their car in it so the doors won't open.

16) Wait until your boss is due to host a slide presentation in front of clients, and try to smuggle a pornographic slide into the mix. Just be very careful that there is no way it can be proved you were behind this, or you could find it very hard to secure future employment.

17) Spread rumours that your ex was terrible in bed, and that this is why the relationship really ended.

18) Call the target's place of work and tell them that you are their specialist, and that you need to speak to the target asap regarding a possible infection risk to the public.

20) A brilliant but really cruel idea to inflict on an unfaithful partner.

With thanks to "h2o Polo Player" at www.ebaumsworld.com

I found out that my soon to be ex wife had been havin lunch time sex with a mutual "friend"...after she left for work, I boiled water and reduced most of a tube of Sex Lube in to the sink. I mixed the remainder with Epoxy and Cayenne pepper and put it back in the bedside drawer.

Two days later I got a frantic call from a neighbor that an ambulance was at our house and they could hear some one screaming in panic...yep.

It took several hours of flushing with and cleaning with solvents and saline to unstick and clear everything up. I am told that there was a lot of raw skin and welts with a few blisters involved also. His wife threw all his stuff out of the house on to the front lawn and my soon to be ex spouse took a leave of absence because of embarrassment...that was three years ago and I still laugh about it all the time.

The statute of limitations just ran out on any charges that could have been filed...

So basically your only restrictions are your imagination and the risks of getting caught. Be careful that what you do is not so illegal that you are likely to cause any major Police investigations, as often the best revenge tactics are the simplest.

Some people will say "move on, enjoy your life, that is the best revenge", but I am afraid for many of us that simply isn't enough, and we will carry that anger around with us until the end of our days unless we feel the person or people who caused us this pain have been punished. Trust your instincts, and don't do anything that will cause you to end up in jail, (nothing is worth losing your own freedom for).

There is no doubt that you will feel much better when you see the causes of your anguish experiencing major anguish of their own!