Traditional Wedding Anniversary Gifts For Each Year From One To Ten

In light of the recent attempts from our politicians, ministers, clergymen, same-sex couples and other authorities to re-define the institution of marriage;which is to many couples still considered a serious life-time commitment between two people to live their lives in union. No matter what they do to it the institution of marriage will always be around. It is an institution that has been honored in so many ways by so many cultures. It is an institution that has brought so many people together for reasons such as; legal, social, emotional, economical, spiritual and religious. Unfortunately, about 50% of marriages do not work for some couples and consequently end in a divorce. The ones that do last have a lot to be thankful for and these couples go on to live a prosperous, productive, and fulfilling life until death they part. So for every year they are still together in their marriage; the couple traditionally gives each other some form of gift or reward to honor their commitment of staying together.

The following is a list of suggested, traditional, wedding, anniversary gifts for each year; starting with year one and moving through the remaining nine years of the first decade of marriage. I always believed, in my opinion, the first ten years are the toughest years because these are the years the couple is still learning and dealing with the challenges of living to together. So these should be some good ideas of anniversary gifts for her and him.

Traditionally, the couple will give each other a gift made of paper. The obvious gift is a card or if you want to get creative and reveal the artist in yourself make your own card. Remember you do not have to spend a lot of money here; you only been married ONE year and men if you give her a flower, give her a Pansy.

Cotton is the gift for this year. Men you can give her anything from a dolly made of pure, soft cotton to a cotton bed linen to keep the flame going. The flower of choice for the second year is a Cosmos. Women you can give him such things as a bathrobe, sleepwear, monogrammed handkerchief or cotton briefs.

This is the year things get a little more expensive. By this time men you should be able to spend more for her gifts since you probably received a promotion or two by now. Leather is it this time. Buy her a nice, leather purse or leather handbag. Stay away from the shoes unless you really know her taste and foot size. Guys if you really want to go all the way, then buy her a leather sofa and rent a couple movies for the night. The third year flower is the Fuchsia. Women the obvious choices of leather gifts for men are wallets, belts, and briefcases.

The fourth year is the year the marriage begins to blossom. The flower is the appropriate gift for this year. Men this is an easy one. Buy her a bunch of Geranium. Unfortunately, the problem with flowers is that they do not last. You can buy her something with a flower theme or design on it such as; jewelry box, table runner, crystals, or earrings. This year is a little tough for women but there are some gifts for men with the floral stem such as; cuff links or a tie pin with a rose embedded in it.

This anniversary is celebrated with wood. Men this year should be an easy one for you. There are so many things made of wood to give as gifts. For example, furniture is the obvious first choice. You can give her other wooden gifts such as; a sculpture, a jewelry box, a music box, or a wooden pendant and guys if you took woodshop in high school; make her something out wood if you really want to impress her. Women you can give him a set of grilling utensils with wooden handles, or a wooden rack to store his CD or DVD collection. The Daisy is the flower for this year.

The sixth year is the sweet year. This one is easy for both of you. A trip to the local candy store or chocolate store can take care of this one. Men if you are good in the kitchen surprise her with her favorite dessert you spent all morning preparing while she was out and serve it to her with a “Calla Lily” flower sitting next to it. Women you can also do the same thing or even go on online and order his favorite candy or chocolate treat.

The wool is it for this anniversary if you can tolerate wearing it. Unfortunately, many people have a problem wearing wool but you can always get a wool rug. If you can tolerate wool then there are many apparels such as scarves, sweaters, socks, and coats a couple can buy for ach other. You can buy a blanket for those cold nights to stay warm and cozy around a fireplace. The flower for the seventh year is a long named one called “Jack-in-the-Pulpit”. I got to check the history on this one day. 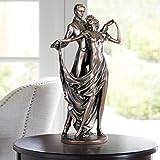 By the eighth year you are now in the Bronze Age. This not a particular exciting metal but men you can give her some jewelry with bronze in it such as necklaces and bracelets. Women can give him a collection of bronze coins or a bronze stature. The flower for this year is the “Clematis”.

Again this is another easy one for the couple. You can buy many things in pottery. Men you can buy vases, plates, and pretty flower pots to decorate the home. Buy a vase and put this year anniversary flower “Poppy” in it for her. Women you can buy him his favorite team mug, or beer mug. It is not too much here for men.

The tenth year is a significant year here. As a couple you realized that you have been married for a decade and this is your first real milestone in your marriage. It is party time. The tenth anniversary gift is tin. As a couple, jewelry made from tin is good gifts to give each other. Sculptures made of tin are also good gifts. If you do not like the choice of tin, diamond is the alternative for this anniversary since it is a significant milestone. The flower for a decade of marriage is the simple, yellow “Daffodil”.

Join HubPages, where you can write about the things you know and love—and even earn money! Click on the link in my profile page to join.Its free.