Why I'm making this page about the Defense of Marriage Act.

Admittedly, this picture may seem a bit facetious, but I think it makes a point. This great country of ours was founded on Biblical principles, and, as I will show, the Bible sees marriage as between a man and a woman. I'm making this page about the Defense of Marriage Act because, despite Judge Bryant's ruling and that of the Boston federal appeals court and president Obama's statements about repealing the defense of marriage act, and recent Supreme Court rulings notwithstanding, I still hold to the Biblical definition of marriage and believe it is vital to preserve it for posterity. Actually, I made this page (originally) in answer to a Sound-off Lensmaker quest--at least that's what got me started, but as I got into it, it has become a more important Spiritual quest to get the Biblical view out there. Admittedly this is primarily a religious issue, but the politicians have chosen to make it a political issue as well, so I thus include it in the squidquest. The quest instructions say to "...create a lens about a political topic and give folks plenty of space to sound off. Choose one specific topic. Share your views and invite folks to share theirs too. Use duel/debate modules, poll modules, and guestbooks with intriguing questions that inspire conversation....." Thus, after some brief background on the defense of marriage act,I will present my own viewpoint (which I refer to as the Biblical viewpoint) first, but then give you a chance to present yours. Don't let my views stop you. PLEASE DO VOTE IN THE POLLS AND EXPRESS YOUR OPINIONS IN THE (SOUND OFF) DUEL DEBATE sections. Thanks.

Do you agree that our Country was founded on Biblical principles?

Was the United States of America founded upon Biblical principles?

Do you agree that the Bible is the authorative Word of God and thus should be our standard?

Marriage in the Bible:

In the Bible, in the book of Genesis, we are told that God created man (Adam), and then, seeing that it was not good for man to be alone, took a rib from his side and made a woman. He then blessed them and told them to be fruitful and multiply. From the beginning, it has been man and woman. Throughout the Bible marriage has been thought of as being between a man an a woman. (I expound further on this in the module titled "My (Biblical) view of marriage, but meanwhile, you may want to check out the book below for further information on the subject:

What does the Bible say about sex and marriage?

Biblical Sex, What the Bible Says and Doesn't Say About Sex and Marriage
Buy Now

What is the defense of marriage act?

(info. gleaned from govetrack.com and Wikipedia:

The bill was introduce by republican, Bob Barr on May 7th, 1996 and signed into law by president Clinton onSeptember 21, 1996. Read the complete history from Wikipedia

The following summary is by the Congressional Research Service, a nonpartisan arm of the Library of Congress:

The "Defense of Marriage Act amends the Federal judicial code to provide that no State, territory, or possession of the United States or Indian tribe shall be required to give effect to any marriage between persons of the same sex under the laws of any other such jurisdiction or to any right or claim arising from such relationship. Establishes a Federal definition of: (1) "marriage" as only a legal union between one man and one woman as husband and wife; and (2) "spouse" as only a person of the opposite sex who is a husband or wife."

Read the complete history from Wikipedia

Check out these related links:

News and views of the Defense of Marriage Act on YouTube:

Further developements on the Defense of Marriage Act: - As of March 27, 2013, gleaned from today's issue of the Miami Herald

This very day the Supreme court is meeting to hear challenges to The Defense of Marriage Act. Here are just a few of the latest shocking developments:

My (Biblical) view of marriage:

Marriage is a divine institution instituted by God. The first 3 chapters of Genesis relate the creation. Chapter 1 verse 27 says "So God created man in His own image, male and female created he them." As some has well said, "God created Adem and Eve, not Adem and Steve." The creation of woman is further defined in Chapter 2 where in verse 18, it says "And the Lord God said, 'it is not good for man to be alone, I will make a helper suitable for him." It goes on to describe the creation of woman. And in verse 24 it says: "Therefore a man shall leave his father and mother and be joined to hiswife and they shall be one flesh." This is quoted by Jesus in Matt.19:5 in answer to a question about divorce, and he goes on to say the familiar saying often heard at weddings: "what God has joined together let no man put asunder." It is my contention that the word "marriage" means as it always has a union between two people of the opposite sex. Even the dictionary gives the first definition of marriage as " (1) : the state of being united to a person of the opposite sex as husband or wife in a consensual and contractual relationship recognized by law. " Moderen dictionaries do ad (2) : the state of being united to a person of the same sex ," but then qualify it by adding: "in a relationship like that of a traditional marriagae." This 2nd meaning was unknown in Bible times. To the writers of Hoy scripture, the term "same sex marriage would have been an oximoron. The writer of the book of Hebrews, whom I believe tyo be Paul, says in Chapter 13, verse 4 that "marriage is honorable and the bed undefiled, but fornicators and adulterers God will judge." Paul also wrote Romans, and there in Chapter 1,verses 18-32, he gives a blatent condemnation of the homosexual lifestyle, saying it is a result of unbelief and Godlessness. Thus, when he speaks of marriage in Hebrews 13:4 he could NOT have meant to include "same sex marriage." In fact, homosexuality is one of the things listed in I Corinthians 6:9 that are excluded from God's kingdom and keep people out unless they repent and turn to Jesus for salvation.

Amazon Spotlight Personal Review: - FOR MORE, YOU CAN PRE-ORDER THIS NEW BOOK on the subject: 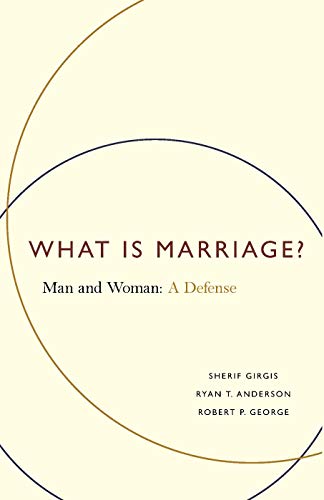 What Is Marriage?: Man and Woman: A Defense
This book’s core argument quickly became the year’s most widely read essay of more than 300,000 scholarly articles posted on the Social Sciences Research Network. Now expanded to address a flurry of prominent responses, What Is Marriage? stands poised to meet its moment as few books of this generation have. If the marriage debate in America is decided in the next few years, it will be either with this book’s help, or despite its powerful arguments.
Buy Now

Consequences of repealing the Defense of Marriage Act--?

Something else to think about is what will be the consequences of repealing the Defense of Marriage Act? The act came about at a time in our nation's history when the term "marriage" was beginning to become ambiguous due to the gay rights movement. ( Read the complete history from Wikipedia.) If we repeal the act now, we will allow that ambiguity to continue and thus promote confusion in the next generation as to the real meaning of marriage and the immorality of same sex relationships. God said in Isaiah 5:20: "Woe unto them who call evil good..." That's what a repeal would do. It would "sanctify" and encourage a sinful (even abominable) lifestyle as normal and good. I'm sure you can think of other consequences of repealing the defense of marriage act, but the main consequence would be for God to turn his back even more than He has upon our great country and for our nation to experience His wrath in a greater measure than before.

Can you think of more consequences (on either side)?

What will be the consequences of repealing or NOT repealing the Defense of Marriage Act?

General Poll - VOTE HERE FIRST, THEN SOUND OFF BELOW

(Vote in this poll first. THEN PLEASE TELL WHY in the duel module below.)

Should we repeal the Defense of Marriage Act?

Now it's your turn to SOUND OFFF: - Should we repeal the Defense of Marriage at?

Well now you know my stance, but don't let that stop you. NOW IT'S YOUR TURN. Feel free to express your own opinion on this volatile issue. I'm expecting a free change of ideas here, as the quest calls for, but please be kind and NO profanity or foul language (your post will be erased or not posted). Thanks.

Should we repeal the Defense of Marriage at?

Well, Now It's Done for good and all! Will We Be Better or Worse?

The supreme court has spoken. Today, June 26th, 2015, The supreme court made a further ruling. Now, not only is defense of marriage act is now unconstitutional, but gay marriage is declared legal throughout the whole United States of America. What will be the results for our country? Of course you can guess my position, but let's hear yours.

What do you see as the results of the supreme court decision?

A Poll for conservatives:

Now that this decvisive decision has been made what should or what can we do?

Now that the decision has been made, what should or what can we do?