Come on, join in the fun and make your voice be heard! Life and love are never that simple. What appears right to you may not be so to another. So, explore these fun love and relationship questions and see where you stand!

It will also be interesting to find out if there is a general difference in perspective from men and women on love and relationship issues. Hopefully, we will be able to notice it through the comments that people leave.

So, are you ready? Take out your boxing gloves, and let's start Round 1!

Dinner On The First Date: Should The Man Pay?

Let's start from at the beginning. The first date. I have many women friends who tell me that they would prefer the man to pay on the first date. The reasons range from sincerity to gentlemanly conduct. I also have a friend who tells me that if the man pays, chances are he is happy with you and would like to see you again. But if he insists on splitting the bill, then he probably has little interest in asking you out the next time.

I don't know if that is an accurate take on the situation, especially when equality between both sexes is widely accepted now and splitting the bill is the way to go for many. But I do know that many women still prefer to be treated special by a man and paying on the first date is a reflection of that.

So, should the man pay on the first date?

A Love Affair That Lasts Forever?

This is an interesting quote by Andy Warhol. It does make a fun love debate in itself, don't you think? 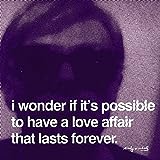 Do Looks Matter In A Relationship?

Once, a group of us were having lunch and a friend brought up this subject about looks and love. I said that it's the inner beauty that counts but got a rebuke from a few around the table. "Judging someone by the looks, isn't that a little shallow?" I argued.

"Yeah, then honestly tell us if you would choose someone who is grossly overweight as a partner," they retorted. I couldn't answer that, so I lost out on the debate.

No, you don't need someone who looks like a supermodel as a partner. But at the same time, how many of us can honestly say that looks isn't a consideration at all in the search for a mate?

Do looks matter when it comes to a relationship?

Why is lingerie so popular? So, is love blind or is it not?

Would You Marry Someone Much Younger?

Recently, we have a local celebrity nearing 50 who married someone who is in her 20's. That is more than a 20-year gap. But an older man marrying a much younger woman probably wouldn't raised any eyebrows. If it is the other way round, it would definitely attract more attention.

But whatever it is, is marrying someone 20 years your junior a good idea? Would you have things in common after the honeymoon is over? Perhaps the more thought-provoking question would be does age difference matter in a relationship? But my guess is most people will simply answer no - it is the love that counts.

So, I have tried to ask it in a different way. Here goes:

Would you marry someone 20 years your junior?

Do You Have A Love Question To Ask? - Share It Here!