Ayn Rand's Philosophy. Just Another Excuse to Destroy the Middle Class by Bankers

Gary opposes Libertarianism and has published the ebook, Libertarianism, the UK Big Bang and How They Ruined America, found on Amazon 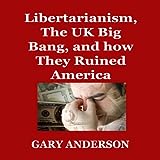 Libertarianism, the UK Big Bang, and How They Ruined America
Buy Now

I will show that a "pox on the house of Objectivism and libertarianism is justified as well as a "pox" on the too big to fail banks that have become more powerful than the nations. But first, I would like to introduce the philosophy of Objectivism to those of you who are not familiar with it.

Ayn Rand originated the term "Objectivism" which is the belief that faith does not exist and only reason. Self interest is the highest calling, not service of others, and man should not be taxed for social security or welfare or unemployment insurance or for any reason other than to protect the free man with military and police.

The big bankers, like the robber barons of the past, have used government to get their way, and therefore, Ayn Rand rejects the concept of government regulation. Ayn Rand believed in the separation of economics and state, making regulation of business opposed to the true goal of government.

Ayn Rand held beliefs that are similar to libertarian beliefs. Libertarians also believe that government regulation is wrong, because man will rise to a higher sense of self through the ending of regulation and the allowance of Laissez Faire capitalism. Libertarians, such as the Mises Institute have adopted Ayn Rand as their own. Ayn Rand's Objectivism is similar to the arguments used by the Libertarians to undo regulation that actually held the financial system at bay, and proves the limitations of this economic cult.

The pox on the two "houses" is only figuratively applied. I totally believe in freedom of speech, and would never want speech to be suppressed. With the financial system owning the presses, there is a great deal of content supporting the concept of bank deregulation. Every Republican presidential candidate in the 2012 election supported the repeal of the Volcker Rule, designed to limit banking speculation and real estate speculation. The bankers refer to Ayn Rand and the libertarians as reason for deregulation. But of course, with failure these banks seek government bailouts.

The New Robber Barons and the Economics of Objectivism

We all know that the new robber barons are the bankers, the too big to fail bankers who control the economics of the world. This international banking cabal is a cabal that has great power. Absolute power is a possible reality as the bankers impose their will on Europe, the United States, Japan and the nations of the world. Whether this power is absolute remains to be seen, but I believe that the power is absolute.

Will Rogers From Great Depression to Great Recession. Briefly, we can see that this law was a means to control the excess of the financial system. Easy money flowed in such a way as to cause the economy to tumble badly in the Great Depression.

Glass-Steagall was a law separating the commercial banks from the investment banks from insurance. The repeal of this law, lead by Phil Gramm and Bill Clinton allowed these entities to merge, and allowed banks to write a form of insurance, called credit default swaps, as a means of hedging risk, bad real estate loans, sovereign debt lending, etc. Of course, these swaps are unregulated and are dangerous.

I have likened the swaps to financial terrorism, where the banks wrap themselves in trillions of dollars of these swaps, making them systemic risks to the entire economic system. If the swaps fail, the havoc in the economic system becomes massive. Many have said that these banks, mainly, big European banks and Wells Fargo, JP Morgan, Bank of America and Citibank, wear these swaps as a sort of terrorist jacket.

Failure to bail these banks out results in danger of massive proportions to the economy, as the banks begin not to trust each other and the financial system freezes up. There are runs on the money markets and the shadow banking system, including hedge funds and lenders of easy money.

Ayn Rand would say that government helped the banks without her understanding that the regulation itself stopped a lot of speculation in commodities and speculation in real estate, allowing the middle class in the United States to be strong for decades. This middle class has actually been massively weakened by the repeal of Glass-Steagall. The Objectivists and libertarians are clearly wrong when it comes to this law. It was a good law that allowed great prosperity. Rand was an advocate of trickle down economics, which sounds great but rarely works. Indeed, in a speculative environment, it doesn't work at all, as was proven by the housing bubble in the last decade.

Speculation causes main street to pay a premium for all commodities, gasoline, food, and ultimately houses that are built with commodities such as copper, wood, etc. Speculation magnifies the scarcity of raw materials.

The reason we must say a pox (figuratively) on both houses is because we have a mess in the United States, Japan, and Europe because of a banking system armed with toxic derivatives like bad CDO's (bonds offered to investors which were filled with bad real estate loans), and with the credit default swaps (CDS's) that insured the bonds. The many trillions of dollars of credit default swaps are likened by Warren Buffett to being financial weapons of mass destruction. Objectivism and libertarianism were the intellectual force for the repeal of these laws. Indeed, Alan Greenspan was a follower of Ayn Rand and wanted regulation to go away. Greenspan caused the CDS's to go untouched and ushered in the central bank sins of off balance sheet accounting and market deregulation. We see the massive damage that has done to the middle class in America.

Now, one issue is discussed in economics and in the libertarianism camp is whether to bail out the too big to fail banks or let them fail. The gut reaction of the man on the street is to let them fail. I have an emotional desire to see them fail. However, that could be very, very dangerous to the world economy. I don't think many realize that there are over 100 trillion dollars of credit default swaps strapped to the bodies of the TBTF banks! If they go down, we may go down as a civilization. When you consider that the entire GDP of the whole world is 50 trillion dollars per year, yet Bank of America alone has 65 trillion dollars of credit default swaps, you can see why the big banks are like a Pandora's box, which if opened cause massive financial destruction.

The European credit crisis is an ongoing crisis that is the result of an attempt to meld sovereign nations in the Eurozone into one nation through the introduction of a common currency, the Euro. The Euro is a controversial economic vehicle. For the Euro to ultimately work, the European Central Bank, the ECB, must have a common treasury and must print money. The ECB is a spinoff of the German central bank. The Germans have issues relating to their historic and current fear of inflation. Most Germans rent and they are sensitive to inflation. The nation experienced hyperinflation in the 1920's, so that people traded lumps of coal and other commodities for purchases. The libertarian position would be to maintain a strong Euro and keep the ECB from printing money to cause inflation.

However, we know that the TBTF European banks could destroy the financial system with the CDS positions they have. We do not know the result of a total meltdown of the system. Now, it must be pointed out that many people believe that printing money will not work, and the Euro is doomed to failure. But that is discussed in my other articles about Europe. The point here is that there is not much choice but to allow the printing of money on the part of the Germans and the ECB. Whatever happens down the road, the banks will have to be bailed out if they lent too much to the PIIGS nations (Portugal, Ireland, Italy, Greece, Spain). So whether the Euro exists or not the banks not being bailed out could cause a financial depression.

I disagree with the libertarians in that I think a small amount of inflation is ok, but only if there is a cap on speculation. I think speculation being unregulated, along with inflation, is a potential financial disaster as the easy money flows into speculative bubbles that impact the real economy. And this to make money for those who contribute nothing to the real economy.

Therefore, the libertarian/objectivist vision of the world is flawed, but so is the TBTF bank vision. Germany wants frugality, yet Germany could not stop the banks from writing bad loans and Swaps on those bad loans to the PIIGS nations. The banks are in trouble without a bailout, and Europe's economy hangs in the balance. The libertarian says let the Euro banks fail. And wouldn't that feel good? Only problem is that we don't know if that will end badly for the economy of the world.

The banks should have thought of all this danger they introduced, and we cannot trust them any more than we can trust libertarianism to guarantee their good behavior.

The credit crisis the world finds itself in is a direct result of three things:

1. the repeal of Glass-Steagall in the United States, (which libertarian and objectivist philosophy fought for),

2. the absence of a Glass-Steagall law in Europe,

3. the ability of the Too Big to Fail banks, with the blessing of the central banks, to wrap themselves in financial weapons (CDS's) of mass destruction.