I am sure that we are all familiar with the Von Daniken type of book which promotes the theory that ancient astronauts travelled to the earth in the dim and distant past. Such theories tend to be based on vague historical fables and imaginatively interpreted historical artifacts and locations.These threads are then skillfully woven into a plausible story.

It is easy to get drawn into the story when reading such books, the main elements of which seem to tell us that ancient astronauts did in fact visit earth in the distant past, and it is easy to believe that such theories could be true, but when the book is finished and you perhaps check out "the facts" for yourself, they somehow seem less compelling. Without the authors spin and gloss, "the facts" seem less extraordinary and more mundane and the chances of ancient astronauts being true seem less likely.

The story I am about to relate here is different. It is not supposition based on vague tales and extrapolations from ambiguous data. This story concerns a happening that occurred in the town of Nizza (Present day Nice in France) in the year of 1608. The events were witnessed by hundreds of townspeople and documented in their journals.

Of course they would not be thinking in terms of Ancient Astronauts, or indeed astronauts of any description - In 1608 it was difficult enough to travel to another country, let alone another planet. The concept of space flight as we understand it was not in existence in 1608. The people who recorded these happenings found the whole thing puzzling, confusing and terrifying. They had no understanding of what it was they were witnessing, but they recorded events as faithfully as they could in terms they could understand.

Although the events may have been beyond their ability to comprehend, when viewed from our own perspective in the twenty first century, they take on a very different flavour indeed. Do these records hint that Nizza was in fact visited by Ancient Astronauts in 1608? Read on and then decide for yourself.

The date: August the 5th, 1608. The time: around eight o clock in the evening. The citizens of Nizza became aware of three luminous objects above the Baie des Anges which were travelling at high speed towards the city. Overlooking the harbour was the Citadel. As the objects approached it they slowed to a stop. The objects then moved down to the water, hovering approximately a metre above the surface.

Because of the slowness of the craft and the low altitude, the citizens were able to see with complete detail what these strange objects looked like. What they saw filled them with anxiety. The machines were of a long, flattened, oval shape with what appeared to be a small "mast" on the top. Although the craft were virtually motionless hovering in the air, the water beneath them was described as seething and giving off a thick yellow mist. An "infernal" noise attended the scene.

The arrival of Ancient Astronauts?

What is described as a living being emerged from one of the machines and appeared to be human-like. They were said to be wearing some sort of red outfit with "silvery scales". The heads, by human standards were huge with two glowing circular openings where the eyes should have been. They were said to be holding two tubes vertically in their hands and these were attached to a sort of harness. The beings plunged into the water up to their waists and then spent a few hours just maneuvering around their machines. By approximately ten o clock at night the beings had returned to their craft, and accompanied by more infernal noise, they shot away towards the east. Within seconds, they had become mere points in the night sky.

These events were seen by the citizens of Nizza as a terrifying warning from God. Throughout the night, processions were formed in the streets carrying figures of Jesus as they prayed that their sins might be forgiven. The next day dawned and the citizens heaved a sigh of relief as there appeared to be no sign of the strange visitors.

The citizens relief was short lived. Sixteen days later on August 22nd 1608 the three craft appeared again, but this time further around the coast towards Genova. The Genovese, having heard what had happened at Nizza, had already prepared themselves for this eventuality. From the Citadel above Genova, a salvo of cannon fire greeted the three strange craft. Cannonball after cannonball - over eight hundred in all - were fired at them. They may as well have fired peas. Not only did the salvo cause no damage to the machines, it didn't even distract the craft from their manoeuvres, although it was noted that on this occasion, none of the occupants seemed willing to leave their ships.

After about an hour of this, one of the machines broke away from the group, parking itself over the town and sending the citizens into a state of high panic. The panic itself caused many deaths as people were trampled underfoot by the stampeding populace. Interestingly, some people were said to have been killed by "radiations" emanating from the craft. Eventually, the singleton rejoined the group and they sped away - once again to the east.

Two days later, August 25th 1608, just one single unaccompanied machine appeared above the tiny fishing village of Martigues which is near to Nizza. It remained overhead for nearly one and a half hours. Two of the occupants left the craft and were said to be flying around their machine in what was described as an ariel duel. The visitors returned to their machine which then flew away, never to return.

So, what are we to make of these events, recorded and witnessed by hundreds of people? Is this indeed evidence of Ancient Astronauts? - If not, how else are we to interpret it? The events were inexplicable to the people who lived through them, and are only marginally less inexplicable to us reading of them over four hundred years later. We of course put a different slant on what we read because of our knowledge and experience of modern technology and space travel. We see the same events through different eyes.

There is nothing to say that our interpretation of these events is any more likely to be in any way more accurate than their interpretation was. We crowbar our perceptions into the paramaters of our own experience in order to extract some sort of meaning from them - but does that "meaning" represent the truth? Indeed, are all truths representable anyway?

So were we visited by Ancient Astronauts in the past? - I'll leave that for you to decide.

Do you believe in Ancient Astronauts?

Do you think the visitors were Ancient Astronauts? 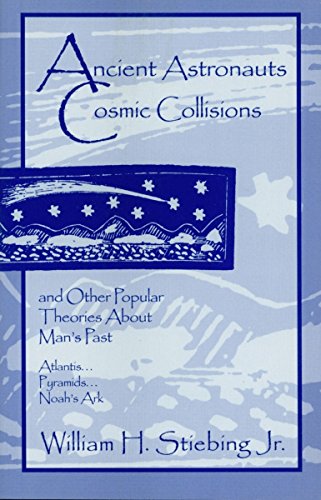 Ancient Astronauts, Cosmic Collisions
This book critically evaluates many of these popular hypotheses about man's early history. It presents the most important evidence and arguments for and against theories of a universal flood, the lost continent of Atlantis, mysterious pyramid powers, pre-Columbian voyages to America by ancient Egyptians and Phoenicians, and Velikovsky's cosmic catastrophism.
Buy Now