The Earliest Record of the Annunaki

The Annunaki are originally found in ancient Sumerian and Babylonian texts. There is very little written down about them in these beliefs systems and at times their roles can change depending on the story. Generally, it is not uncommon to see them sitting as a panel of judges for heroes who might have found themselves going through the underworld. The most well-known examples of this are the epic of Gilgamesh. In more recent years, these demi-gods have found themselves a new home amongst Ancient Alien theorists. They tend to view these beings as an ancient race that visited the Earth and helped in the creation of civilization.

Your Take on Aliens

Why they Came to Earth and Why they Left

The theory that floats around the Ancient Aliens circle is that this race originated on the planet Nibiru which still has not been discovered by modern man. The aliens came to earth to set mining operations for gold for their homeworld. In order to accomplish this task, the Annunaki began experimenting with the lower life forms found on primitive Earth to create a race of slaves to operate the mines for them. They would rule over man until the glaciers found in the Arctic began to melt and flooded the Earth.

After the Annunaki left the planet a group known as the Nephilim were left with the duty of rebuilding what had been destroyed by the floods. It would be during this period in early man that the Nephilim would start to teach mans the ways of agriculture and language. This was done in order to ensure that there would be a large enough workforce that could be used to complete this massive undertaking.

There are two different descriptions as to what the Annunaki look like. The first comes from Zecharia Sitchin who was the first to make the claim about these ancient space travelers establishing mining operations on the planet. He described them as being tall humanoid creatures. The second descriptions are from Erich von Daniken who claims that the Annunaki are not humanoid in nature, but rather they are reptilian in nature. These reptilian creatures in some accounts are shapeshifters and can hide their lizard-like features. This variation is common among people promotion the Illuminati and New World Order theories as well.

David Icke has expanded on the conspiracy theory and has made the claim that many of the royal families are ancient bloodlines of the Annunaki. He thinks the interbreeding that was common with royal families was part of a genetic experiment by the Annunaki to ensure that they didn’t become too watered down with the genes of lesser life forms. Besides commonly citing the ancient text, this theory also points to the similarities that exist between artwork showing ancient rulers and modern-day rulers. Sometimes the disguise of the elites will slip and for a moment you are going to be able to see the reptile features they work on keeping hidden.

What did the Aliens Leave Behind?

Outside of the ancient religions, theorists point to various things found on Earth that were left behind after the floods. The pyramids of Egypt are the most common of these examples and are generally viewed as being connected to the pyramids that can be found in Central and South America. In some cases, the pyramids act as landing pads for the space shapes while others promote the idea that the pyramids act as a sky map to help the ships find bases and landing pads. Some of the ancient wonders are also viewed to have been labs for the Annunaki to conduct experiments in.

One of the more interesting things people believe are left over are animal hybrid experiments. Before the Annunaki began experimenting with chimps to create humans, they attempted to use other types of animals. The monuments of the Sphinx with the body of a lion and the head of a human as well as the monsters from many different forms of mythology are cited as being evidence of these experiments. Some theorists also believe that some of these hybrids might still be alive today hiding out in the more remote regions of the planet. Bigfoot is thought by some to be one of these experiments to have survived to the modern day.

In Search of the Perfect Slave

The Annunaki in Pop Culture

The Annunaki are one of the most popular alien theories currently going around. This group has not just inspired theories, but it has also worked its way into film, comics, and books as well. Many conspiracy theory-based games use the shadowy organizations that the reptilian aliens use to control the population. Science fiction has also been exploring the topic more with movies like Prometheus playing off the idea of a race of genetic engineers who came to Earth and jumped started life with their experiments.

The homeworld of the Annunaki also made news coverage when reading of a Mayan Prophecy made it sound like a new planet would be entering into our solar system and would be the return of the aliens who helped man create civilization. This spurred a wide variety of books exploring the religion of the Mayan and what the connection was with Ancient Aliens. While the mysterious planet never ended up making an appearance, it is still viewed as many as still existing just beyond our line of sight.

The history channel also runs a series titled Ancient Aliens that features many of the original proponents of the theory as well as numerous other theorists who have expanded on this work. Many times, the episodes will focus on one ancient culture or text and try to find examples or how these areas and text might be hinting towards extra-terrestrials. The show has also created a series of memes that can be used in almost any situation that you may end up finding yourself in.

Go Deeper into the World of Ancient Aliens 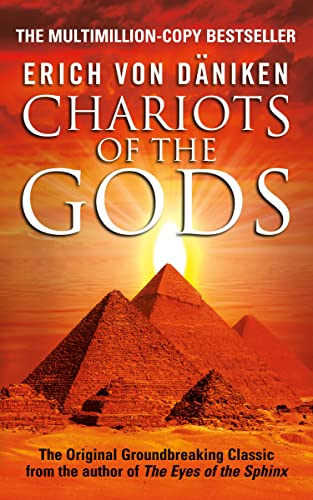 Chariots of the Gods
Buy Now

Did they Build Civilization?

So, where the Annunaki the ones responsible for the creation of civilization or are they just another example of man looking into the past for answers about what the future may hold? With the popularity of this theory there has been numerous theories that have been expanded to encompass more folk lore then just the ones of the Sumerians and Babylonians. These theories view all the religions has talking about the fore runners and that the cultural differences are one of the big reasons why modern man has forgotten about them.

Get More Out the History Channel Show Ancient Aliens