In debates over religious faith and morality, examples of humanity's greatest monsters are routinely offered to demonstrate the supposed “evils” of atheism, apparently in the mistaken presumption that someone so nefarious couldn't POSSIBLY believe in God (a notion decidedly undermined by far too many examples from history). Perhaps the most notorious –and the most demonstrably innacurate – example is that of Adolf Hitler. Indeed, an examination of the historical record quickly makes it clear that he was anything BUT atheist!

For example, in Hitler's first public address to the nation, he singled out Christianity as “the foundation of our national morality,” and in a March, 1933 Reichstag speech, he warned of the supposed dangers of atheism:

“...The advantages of a personal and political nature that might arise from compromising with atheistic organizations would not outweigh the consequences which would become apparent in the destruction of general moral basic values. The national Government regards the two Christian confessions as the weightiest factors for the maintenance of our nationality..."

The Portable Atheist: Essential Readings for the Nonbeliever
Buy Now 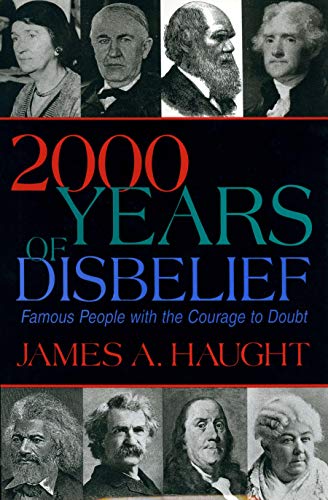 2000 Years of Disbelief: Famous People with the Courage to Doubt
Buy Now

Doubt: A History: The Great Doubters and Their Legacy of Innovation from Socrates and Jesus to Thomas Jefferson and Emily Dickinson
Buy Now

Throughout Hitler's career, his writings, speeches and public pronouncements are full of positive references to God, Jesus and Christianity. For the sake of brevity, I'll quote only the most evocative examples, including this from one of his earliest Munich speeches, in April 1922:

"...In boundless love as a Christian and as a man I read through the passage which tells us how the Lord at last rose in His might and seized the scourge to drive out of the Temple the brood of vipers and of adders. How terrific was His fight for the world against the Jewish poison. Today, after two thousand years, with deepest emotion I recognize more profoundly than ever before - the fact that it was for this that He had to shed His blood upon the Cross..."

Later, in 1925, while in prison for attempting to overthrow the Bavarian government, he wrote his political manifesto, “Mein Kampf,” containing this theological gem:

"...Therefore, I believe today that I am acting in the sense of the Almighty Creator: By warding off the Jews I am fighting for the Lord's work..."

A common rationalization by apologists is that Hitler, like so many politicians, merely pandered to public religious sensibilities in order to gain or maintain popular support. Yet Hitler's expressions of piety span the breadth of his political career -- from his early days as a radical and revolutionary in the 1920s to the summit of his political power as virtual dictator of Germany in the 1940s, when he had absolutely NO reason to fear public sentiment (and they had EVERY reason to fear him)!

For instance, Hitler ended his first official proclamation to the German nation as Chancellor, in February 1933, with an appeal to divine providence:

“...Now, people of Germany, give us four years and then pass judgment upon us. In accordance with Field Marshal von Hindenburg's command we shall begin now. May God Almighty give our work His blessing, strengthen our purpose, and endow us with wisdom and the trust of our people, for we are fighting not for ourselves but for Germany..."

In 1944, at the height of his power, his religious references were specific and unequivocal, such as this excerpt from a speech at the Platterhoff Hotel in July, 1944.

“...Perhaps I am not what they call a sanctimonious hypocrite or pious. I am not that. But deep in my heart, I am a religious man; that is, I believe that the man who, in accordance with the natural laws created by God, bravely fights and never capitulates in this world-that this man will not be abandoned by the Lawgiver. Instead, he will in the end receive the blessings of Providence...”

Even in the last days of the Reich, in April, 1945, his Orders of the Day to the troops included pious references:

"...We pray to God that He may lead our soldiers on the path and bless them as hitherto..."

It is also frequently noted by apologists that Hitler often conflicted with both Protestant and Catholic churches in Germany, even officially suppressing them in some instances. But in this regard the churches were no different from any other institution in the Reich who could potentially challenge the power of the state. Hitler and the Nazis persecuted ANYONE who opposed them!

In fact, Adolf Hitler was born to Catholic parents, was confirmed and was never excommunicated. So, at the very least, he was a 'nominal' Catholic. In any case, he vigorously took at least one longstanding official Catholic doctrine to heart -- a visceral hatred of Jewish people. For centuries, the Catholic Church had persecuted Jews with slanders, forced conversions and insidious papal edicts, including a notorious 1555 command from Pope Paul IV that:

“...Jews should be recognizable everywhere: [to this end] men must wear a hat, women, indeed, some other evident sign, yellow in color, that must not be concealed or covered by any means, and must be tightly affixed...”

In the end, the question isn't whether Adolf Hitler was a 'devoted' Christian or, like most, just a 'casual' Christian. Nor is it whether individual believers or religious groups tried to oppose him. The issue here is whether he, himself, was an ATHEIST, and if so, whether his atrocities can be attributed to atheism. The weight of the evidence makes it clear that, even if he was only a nominal Christian, he was still religious. So if we're going to consider his crimes through the prism of theology, we must count him among the ranks of believers, NOT atheists.

Hitler Was A Christian