The Wild and Desolate Moor

Bodmin Moor remains one of the South West of England's last areas of untouched wilderness. Although nowadays it is possible to speed across the Moor via the A30 in a matter of minutes you are still able to glimpse from the car window the vast expanse of uninhabited rough pasture, punctuated here and there by a granite tor. It makes for an interesting view, a welcome diversion from the usual urban sprawl.

For our ancestors, the Moor presented a quite different proposition. Until the 1770s there was no road across the Moor and it was a daunting obstacle for travellers. The Moor has several prominent hills, but much of the ground falls away into a featureless marshland, criss-crossed by several rivers. Once the mist or rain descends it would be all too easy to lose your way on the Moor. As well as the capricious weather, there would have been danger from your fellow man. Whilst there are many villages around the Moor, large swathes of it are isolated - the perfect hunting ground for footpads, robbers and murderers to operate without fear of detection.

The people who lived around the Moor did not just fear the living; judging by the ghost stories that abound on the Moor it is a favoured spot for the spirits of the departed. There is of course the Beast to contend with too... 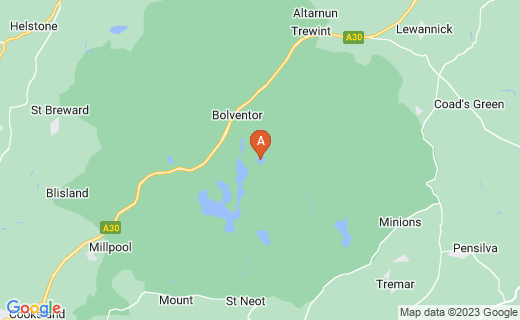 Dozmary (or Dozmare) Pool is a small lake near Jamaica Inn. Its still waters have a certain desolate charm and its shores are eerily quiet. In the past the lake was said to be bottomless, with a whirlpool in the centre which connected the lake to the sea via a tunnel. Sadly, a survey in the nineteenth century concluded that the lake reached no greater depth than 9 feet.

The Pool has been linked with the Arthurian Legend. It has been suggested that this is the home of the Lady of the Lake. She is said to watch over the sword Excalibur which lies beneath the lake's depths, having been flung there by Sir Bedivere.

The legend of Jan Tregeagle also centres around Dozmary Pool. Tregeagle was apparently a seventeenth century steward of the Lanhydrock Estate near Bodmin. He was a thoroughly objectionable man, who murdered his wife and children, mistreated the Estate's tenants, cheated an orphan out of his inheritance and struck up a bargain with the devil. After Tregeagle's death some of his victims went to court to try to get back the land he had taken. The judge was summing up the case when a final witness was called: the miscreant himself. An astounded court watched as Tregeagle slowly materialised in the witness box and proceeded to answer the questions put to him by a remarkably calm judge.

Following the case, Tregeagle managed to escape being sent back to Hell but was set to work for eternity on Bodmin Moor, his task being to empty Dozmary Pool with a broken limpet shell. As he toils to accomplish his never ending job, he is watched over by the hounds of Hell, who wait to drag him back to Hades should he attempt to escape.

Dandy Dogs and the Wild Hunt

Dandy Dogs, also known as Dando Dogs, are an ancient part of British folklore. These diabolical hounds are part of the Wild Hunt. The idea of a Wild Hunt recurs throughout Britain and other parts of Europe. Sometimes the hounds are led by a huntsman, perhaps the devil himself, witches or sometimes they hunt alone.

The Devil and His Dandy Dogs

The hellish hounds guarding Jan Tregeagle are not the only pack of gruesome canines to be reported roaming the Moor. The devil himself is said to have hunted human souls on the Moor with his "Dandy Dogs". One of his intended prey was a herdsman who found himself out on the Moor on a blustery night. Trudging home after a hard day, he heard a sound carried on the wind; the baying of dogs. The poor man was miles from home and tried to hurry through the treacherous boggy ground, with the noise of the dogs getting closer and closer. Already terrified the herdsman looked over his shoulder and recognised the figure of the devil, complete with horns, a tail and a hunting pole, his hounds before him. The man was exhausted and sank to his knees, ready to meet his maker, but in his final moments uttered a prayer. On hearing his words the hounds stopped in their tracks, baying furiously. The devil, struck by the power of the prayer, called off his Dandy Dogs and retreated back to hell.

Was Matthew Weekes Guilty? You Decide

There has been considerable speculation in the past twenty years about the safety of Matthew Weekes' conviction for Charlotte Dymond's murder. Many people feel that Matthew's guilt was decided long before the trial and other possibilities discounted without being properly explored. Now you can take part in a reenactment of the case at Bodmin Shire Hall, becoming one of the jurors.

The Tragic Ghost of Charlotte Dymond

Charlotte Dymond's sad story is well known in Cornwall. Charlotte was an 18 year old servant, who worked for a widow and her son at Penhale Farm, on the edge of Bodmin Moor. The household also contained two farmhands, Matthew Weekes and John Stevens. Charlotte and Matthew had been walking out together for around two years, They were in some ways an unlikely couple; Matthew was lame, rather short and had a bad complexion. Charlotte was attractive, well-turned out and something of a flirt.

On Sunday 14 April 1844 Matthew and Charlotte went out for a walk together. Charlotte was wearing her Sunday Best - a green striped dress and a red shawl and Matthew too was smartly dressed. Later that day, Matthew returned alone; he told his employers that Charlotte had gone off on her own in a different direction. As the days went by and Charlotte still did not return Matthew said that Charlotte had in fact gone to find work elsewhere. He allegedly also made remarks trying to implicate Charlotte's estranged mother, should Charlotte turn up dead. He then disappeared.

Charlotte was indeed found dead. Several days after her disappearance, the neighbours began a search and found her body in a stream. Her throat had been savagely cut. Matthew Weeks was found and tried for Charlotte's murder. It was said that Charlotte was seeing another man and had told Matthew who killed her in a jealous rage. Several people placed Matthew and Charlotte on the Moor together at the time and circumstantial evidence (muddy boot prints and mud on his clothes) placed him at the scene. More damning was his confession. All the evidence pointed to Matthew and he was duly hanged at Bodmin Jail.

A monument to Charlotte was erected at Roughtor where her body was found. She is buried in the churchyard at Davidstow. However, she has not found peace. On lonely nights, especially on the anniversary of her death, her ghost walks around the tor in her green striped dress and red shawl. Sentry duty at the military post on Roughtor was particularly unpopular with men of the local militia due to Charlotte's unnerving spectre.

Find out More about the Moor

Surfgatinho has written a great hub about the Moor, complete with fantastic photos:

The Beast of Bodmin Moor

There have been persistent rumours and purported sightings of a large black beast on Bodmin Moor.  In the past there were the Dandy Dogs, more recently farmers have reported livestock going missing or being mauled by large predators.  A popular notion is that a big cat, perhaps a leopard or a puma, has escaped from captivity and found its way onto the Moor where it has interbred with domestic cats.  Following years of speculation the Ministry of Agriculture, Fisheries and Food carried out an investigation and concluded that there was no conclusive evidence either way.  There is video footage of the Beast - it looks more domestic cat than big cat!