As the story goes, Carlos Castaneda, an anthropologist from UCLA, ventured into the desert of northern Mexico in the 1960s and returned with some hair-raising tales about a Yaqui sorcerer or diablero named Don Juan Matus, who performed mind-boggling supernatural feats, such as morphing into a crow and then flying like one!

Over time, Castaneda became Don Juan’s apprentice, eventually marshalling his own power over the forces of nature. These stories - compiled in 12 books, the first published in 1968 - were truly astonishing because Castaneda insisted they were factual recollections of his many strange, shamanic experiences in Mexico. But were these chronicles nothing more than the product of an overactive imagination?

Only Castaneda knows for certain, and he’s no longer with us.

Nevertheless, I was captivated by Castaneda’s books, because they resonated with the Counterculture ethos of the time, which emphasized esoteric teachings, alternative lifestyles, rebellion against authority, Eastern religion and the altered states of consciousness possible with the ingestion of psychedelic substances such as LSD.

Man, Castaneda’s stories were trippy, ya know? I recall thinking: Of course somebody can turn into a crow! With the right knowledge and training, any one of us could!

Castaneda disappeared from public view in 1973, about the time an article in Time magazine described him as “an enigma wrapped in a mystery.” Also at this time Castaneda began living with three so-called witches in a large house in Los Angeles. Purportedly, these witches had also been apprentices of the decidedly mysterious Don Juan Matus.

Castaneda returned to public view in the middle 1990s, when he promoted Tensegrity, a Toltec regimen of spiritual exercises. Those three aforementioned witches came along as well, lecturing and giving radio interviews about Tensegrity. By that time, I didn’t pay much attention to Carlos Castaneda. The times had changed, and so had I, and I had heard that his “tales of power,” as I now refer to them (a phrase that is also the title to one of his books), were works of fiction at best or, at worst, an outright fraud. Still, I considered them a good read, and I certainly didn’t regret that I had read most of his books.

Carlos Castaneda was born in Peru in 1925 and immigrated to the United States in the early 1950s, becoming a U.S. citizen in 1957 or 1959, depending on sources. In the 1960s to the early 1970s, while a student at the University of California at Los Angeles, Castaneda wrote three books about his experiences in northern Mexico: The Teachings of Don Juan: A Yaqui Way of Knowledge (1968), A Separate Reality (1971) and Journey to Ixtlan (1972). Based on the notes in his research log, these books were the basis of his degrees (B.A. 1962 and Ph.D. 1973) at UCLA.

While under the tutelage of Don Juan and another spiritual “teacher,” if you will, by the name of Don Genaro, Castaneda learns the Mastery of Awareness, the Mastery of Stalking and the Mastery of Intent. At first, Don Juan forces Castaneda to take various psychotropic substances such as peyote (mescaline), datura (Jimsonweed) and mushrooms (Psilocybe mexicana) – or power plants as they were called - in order to shake his fixation on reality, thereby opening the doorway to a state known as nonordinary reality. The object is for Castaneda to become a warrior-traveler who can protect himself in clashes with hostile entities, as well as other sorcerers or brujos (warlocks) who might wish to steal his power or even kill him.

But Castaneda eventually realizes that he no longer needs to ingest these drugs once he learns how to shift his attention to nonordinary reality, known as “stopping the world” in order to perceive the world as it really is, not as he thinks it is. Don Juan also shows Castaneda the so-called gait of power, with which Castaneda learns to protect himself from malevolent spiritual entities.

Castaneda’s early books are filled with passages when Don Juan and/or Don Genaro amuse themselves by shapeshifting into fearsome creatures and/or perform seemingly impossible acrobatic movements - as Castaneda gapes at them, awestruck. Then, invariably, they guffaw at Castaneda, having a grand time at his expense. Don Genaro, in particular, is a trickster (coyote), who often imitates Castaneda and teases him almost constantly.

Don Juan also tells Castaneda about the existence of the tonal and nagual. Simply put, the tonal is everything, and the nagual is everything else! The following is a passage from The Eagle’s Gift (1981):

"Don Juan had told us that the human beings are divided in two. The right side, which he called the tonal, encompasses everything the intellect can conceive of. The left side, called the nagual, is a realm of indescribable features: a realm impossible to contain in words. The left side is perhaps comprehended, if comprehension is what takes place, with the total body; there its resistance to conceptualization."

Numerous passages from Castaneda’s books tell of his encounters with the forces, entities and creatures of the Sonoran Desert, a truly fascinating place of hidden allure and dangers of almost unimaginable proportions. Always the willing subject, Castaneda faces these challenges as a man of great courage and manifests his terror in a most engaging literary fashion. Castaneda was so good at describing his terror!

At the end of Castaneda’s fourth book, Tales of Power, Carlos jumps from a precipice - presumably not killing himself in the act - signifying his emergence into the world as a Man of Knowledge in the ilk of Don Juan and Don Genaro. Many people thought this passage would mark the end of the series, but Castaneda kept cranking out books, 12 in all.

Then Carlos Castaneda died of liver cancer in April of 1998.

As far as I’ve been able to ascertain, Carlos Castaneda never said or wrote that his books were anything less than factual accounts of the events described within them, but there are certainly a number of people who think he was not telling the truth.

The first analytical criticism of Castaneda’s books came in 1976 with the publication of Richard de Mille’s book, The Power and the Allegory, in which he wrote:

"Logical or chronological errors in the narrative constitute the best evidence that Castaneda's books are works of fiction. If no one has discovered these errors before, the reason must be that no one has listed the events of the first three books in sequence. Once that has been done, the errors are unmistakable."

"Beneath the veneer of anthropological fact stood huge discrepancies in the data: the books ‘contradict one another in details of time, location, sequence, and description of events. There are possible published sources for almost everything Carlos wrote."

"There is no corroboration beyond Castaneda's writings that Don Juan did what he is said to have done, and very little that he exists at all."

As far I can tell, nobody ever met Don Juan or Don Genaro or any other character introduced in Castaneda’s books. I recall hearing that some hippies went to Mexico looking for Don Juan, but they never reported finding him.

In the end, whether Castaneda’s stories are based on factual accounts is up to the individual to decide. My friends (Castaneda enthusiasts as well) and I used to say that it hardly matters if Castaneda’s books are based on true events, because his “journey” is what really counts.

At any rate, I’ve always thought that a good story is a good story, no matter what. Pick up the first book in the series and see if you like it. Then you might soon feel the inescapable urge to travel to the desert of northern Mexico, hoping to encounter a spiritual entity or two.

“Ye shall know the truth, and the truth shall make you mad.” 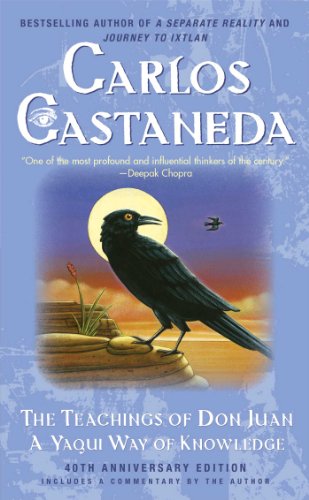 The Teachings of Don Juan: A Yaqui Way of Knowledge
Buy Now