Do You Really Need to Pick a Religion?

Can a Person Move Beyond Religion?

Today, as most days, I did my normal routine – work, kids, home, friends – the usual routine of a middle aged mother and helpmate. I must confess that I did not expect anything unusual to happen when my other half and I were discussing some issues while hiding from the children in the garage. We usually have to hide because they outnumber us.

I was listening to the man I follow, and frequently, pick up after, talk about his feelings on religion and spirituality. He frequently does this, correlating end time prophecies with current events and his belief that we are living in end times. It comes complete with relevant quotes from scripture and other reliable religious sources. He weaves a compelling argument any time we broach this topic. I listen in fascination as the man who forgets birthdays and other important dates remembers chapter and verse some pretty amazing biblical quotes and pronounces Roman and Jewish scholars like they were his personal friends.

When he is speaking on this topic, I mostly remain silent. It’s not because I have nothing to say. I have plenty of opinions, thoughts and feelings on this matter myself. Unfortunately, for me at least, the man is so passionate in his beliefs that I can’t get a word in edgewise. So, thanks to Hubpages, I have found a perfect way to tell this man what my thoughts on this matter are and to share them with the rest of you as well.

Let me begin by saying, I have no religion. It’s not that I don’t have spirituality; I just don’t have a preferred religion. Born Lutheran, raised Catholic and living smack dab in the middle of the bible belt does tend to expose one to the various tenets of Christian faith. In addition, I served in the first gulf war, where I was exposed to differing religions than that of Christians. Out of curiosity, I’ve read articles and books on many different religions that would be considered pagan. So all in all, I would consider myself modestly knowledgeable about religion.

Out of all of this, I have come to the conclusion that religion itself is a man-made article used to disseminate the ideas of man about God. Every religion tells its disciples, how to live, how to worship, how to get to the next level of existence, i.e. heaven, paradise, or whatever that particular religion calls it. But, you will cry out, the Bible, Koran or other holy teachings are the word of our particular God. I respectfully disagree. These holy books are the writings of men about what they believe God, Allah, or Yahweh, etc, etc, etc, has enlightened their minds with. There is no book that specifically IS the Word. They were all written by men who are fallible, prejudiced by their times and cultures, and imperfect. Human beings just like you and me, that although they may be wise learned men, they are not GOD.

Out of these books and teachings comes Religion. Made up by men who believe that they have been enlightened enough to tell others the recipe, secret formula or correct behaviors that will get you to Happy Ever After. There are religions within religions because men who follow after a particular religion sometimes convince others that they have a better, truer meaning of these books and teachings. Christianity is such an example. Baptist, Methodist, Catholic, Church of England – all considered Christian but varying widely within their belief system. Sunni, Shiite, Moderate, Radical, and Fundamentalist; all considered Muslim, yet still varying widely in their belief system as well. So Religion, formed on the teachings and wisdom which is based on the thoughts and experiences of people from another age, time and culture, is a man made article.

Most religions have Jesus or a Savior in them, whether as a prophet, learned man of God or the Son of God himself. My question in all of the wrangling as to his status is this: The New Testament has four gospels by the disciples, why isn’t there a Book of Jesus written by him? After all, no matter which religion you look at – he is a pretty important figure. You’d think that he’d leave behind some kind of definitive written teachings that would clue everyone in the world as to what to do to please their Maker. Instead, we have strife, killings, prejudice - all in the name of God, Allah, Yaweh, etc, etc, etc.  I really don't think that this is what the Maker would want for his creations.  We can all agree that the killing is wrong- but we want to end it on our own terms - with a winner and a loser- not because killing diminishes both the victim and the attacker.

Got the nooses, pitchforks and burning brands out yet? Its okay, I understand if you do and wish to quit reading. But, if you can bear it a moment more, I’d like to tell you what I think in simple terms.

Now, I do believe in a Supreme Being – a creator, maker, builder of all that we see in heaven and earth. Because of my upbringing I usually call him God. But to my mind, He has many names, each personal and unique within each person. After all, something as complex in its entirety yet connected intimately from the macroverse to the microverse had to have someone pretty powerful and wise to design it.

How we as individuals, choose to treat, glorify and listen to this God, is nobody’s business but our own. Not a priest, imam, shaman, minister, or other supposed conduit to God – it’s just between you and your Maker. A direct line, no operators are standing by 24 hours a day. God listens to you and you listen to God without even realizing you are doing it.

All religions agree that we are made for a purpose. It is up to us to discover and nurture that purpose within ourselves with the guidance directly from the Maker with no go betweens. It is up to us to define good and evil within ourselves and to act upon it accordingly. Go ahead, use the great teachings and words as a guide within your life, knowing that they are not infallible in their wisdom just as all human beings are not infallible as well.

Broaden your horizons and wisdom by looking at other cultures and their beliefs. The Maker created us all- black, white, red, brown and yellow. No single culture or group has a better understanding than another; rather they have different understandings in which true wisdom always shines through.

There is no one way to get to where you want whether that is heaven, nirvana, paradise etc. Instead, you will go to where and when the Maker decides and it may not look anything like you were taught. After all, no one has really come back with a firsthand account. Sorry folks, not even Jesus did that – he just said that on the third day he rose from the dead. He didn’t give a description of where he’d been for those three days.

Remember that however, whenever, and wherever you choose to worship, talk to, commune with, or glorify your Maker, nobody has the right to tell you how, where and when to do it. I don’t care if you are in the shower, sitting on the freeway, hiking through nature, taking a call from nature, hugging a tree, hugging a child or sitting in a pew, kneeling on a rug, or dancing around a fire. However, you decide to contact your Maker, it is your personal way. I wish you the best of journeys in discovering it.

Now, I know that there are a few of you out there, just quivering in front of your keyboard, dying to set me straight and show me the errors of my ways. Feel free, go ahead, and tell me your understanding of your Maker. I will listen, I may even learn something and I will respect your understanding. After all, knowledge and wisdom should be shared. If I don’t see your point maybe you’ll be helping someone else find theirs. 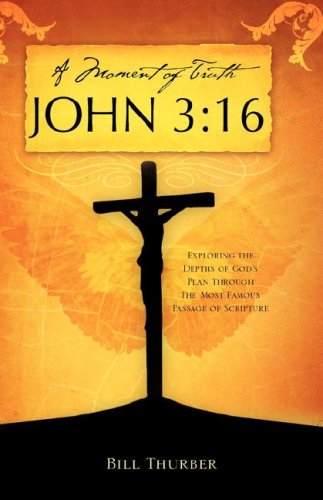 A MOMENT OF TRUTH JOHN 3: 16
From a relative of mine - I've never met him but he's family so he must be smart!
Buy Now