Where to Experience Fright Nights -Haunted Hotels in Scotland

Why should hotels be haunted?

There is no doubt about it! Hotels, pubs, inns and any other kind of hostelry are very haunted places. But why?

Previous to the hotel, the building or land would frequently be used, sometimes for centuries, as family homes, farms, churches etc.Therefore, you will get a huge build-up of history and drama focused in one location.

In addition I've heard the question many times:

"Not many people die in hotels so why should they be haunted?"

There could be a few reasons for this:

These are just a few of the reasons why a hotel that has not had many deaths on its premises could still be haunted. So lets now have a look at some of these scary places!

Old hotels with a haunted history

A beautiful castle standing on the River Esk, is now a hotel with a very grim and frightening past. Today it's guests are relaxed and with many weddings taking place within it's ancient walls, the old stones now ring with laughter. This wasn't always the case.

The castle dates from the 13th century although most of the visible structure is later - from around 1450 - and was built by the Ramsay family.

William Ramsay is known to have witnessed deeds in 1280 and was at that time known as Ramsay de Dalwolsey. His name appears as one of those who fought beside King Robert the Bruce at Bannockburn and he also witnessed the famous appeal to Pope John XXII in 1320 - known as the 'Declaration of Arbroath '.In this historic document the people of Scotland pleaded for the Pope to recognise their right to be an independent nation and not under the rule of the English King. One of the most famous extracts from the declaration reads:

"As long as but a hundred of us remain alive, never will we on any conditions be brought under English rule. It is in truth not for glory, nor riches, nor honours, that we are fighting, but for freedom - for that alone, which no honest man gives up but with life itself".

The ghosts of Dalhousie:

Sir William Ramsay certainly began a long line of some of Scotland's bravest men. One of the most famous was Sir Alexander Ramsay who was starved to death at the hands of Sir William Douglas. Douglas was a previous friend who became jealous of Sir Alexander's rise to power and the appointments given to him by the King. Sir Alexander is said to possibly haunt Hermitage Castle in the Scottish Borders, but his ghost is also said to have been witnessed on many occasions at his home of Dalhousie Castle. He is said to be a sad spirit perhaps still looking for answers as to why a former friend should have taken his life in such a horrific manner.

Another of the famous ghosts is that of Lady Catherine. There are different stories about her ranging in dates from 1695 to 1720. The most consistent part of the story is that in some way she was starved to death - this seems to have been quite a fashion in medieval Britain! Now Catherine either starved herself to death when her parents would not allow her to marry the man she wanted. Alternatively, she may have been starved to death by her parents for bringing shame on the family by wishing to marry beneath her. Thirdly, the story is that she was the mistress of the Lord and was starved to death by his wife. Take your pick as to which story you prefer. However, the spirit of Lady Catherine certainly exists. Not only has she been seen by staff and visitors numerous times, but her image may also have been caught in a photograph during a wedding that was taking place just a few years ago.

Lady Catherine tends to be very playful. She pulls hair, taps people on the shoulder and even plays hide and seek. One of the long term members of staff has had a number of spooky encounters at the castle and none more so than with Lady Catherine. She tends to put her head out of one door only to re-appear and stick her head out of another, before vanishing completely through another door that is shut and locked. Many visitors have also reported encounters with Catherine both in their rooms and when they are leaving. As guests look up at the hotel, she has often been seen waving to them from the windows.

Other ghosts at the castle are said to be of a previous butler who now haunts the old library as well as a little terrier dog. Another ghost is that of a young schoolboy who tragically fell from the roof in the early 20th century. The castle was a school from the years 1925 to 1950.

Dalhousie Castle is one of those very special places where the spirits and ghosts seem to have a lot of energy and the ability to interact with staff and guests. So if you want an active fright night you might not have to look any further than Dalhousie Castle!

Royalty and murder at Borthwick Castle

The impressive twin towers of the castle were built by Sir James Borthwick, (later Lord Borthwick), around 1420 on the site of an older castle that had been granted to him by King James I of Scotland. Borthwick is the tallest castle in Scotland standing at about 110 feet. The walls are approximately 14 feet thick. Between the two towers there is a 12 foot gap that was used for a gruesome purpose. Prisoners would be blindfolded and made to jump the space between the two buildings. How many fell or if any actually made the leap successfully is not recorded.

For centuries grand banquets and celebrations were held in the magnificent Great Hall where the original, massive fireplace still exists - it's 20 feet high and 15 feet wide.

There have been famous names from history who have spent time at the castle - some invited others not. Mary Queen of Scots visited the castle on at least two occasions and legend states that she once escaped from here dressed as a page boy. Oliver Cromwell laid siege to the castle in 1650 during the Civil War. The area where a cannon ball tore off a huge portion of the stone on the east wall can still be seen today.

Borthwick Castle Hotel is a very haunted place. Not only ghosts but many other types of paranormal phenomena have been reported and captured by investigative teams. Activity such as - EVP's (Electronic Voice Phenomena), disembodied voices, various noises with no apparent natural cause, apparitions and apports. Apports are objects that seem to appear with no rational explanation. In addition many visitors and staff have had physical affects such as feeling nausea in certain areas of the hotel. In the Great Hall, countless people have remarked on the strong sensation of invisible presences around them in this area. The paranormal events became so terrifying that at least one room in the hotel - the 'red room' - at the request of the hotel owners, was exorcised by a priest from Edinburgh.

So who then are the ghosts who are said to haunt this ancient building? There are a number of different apparitions that have been witnessed numerous times over the years. The most famous one is of course Mary, Queen of Scots who is alleged to walk around the castle on occasion. Whether it really is Mary or another female is open to debate. Mary seems to do an awful lot of haunting in many locations - some of which she probably never even visited!

Another female ghost is said to be that of a young girl who gave birth to an illegitimate baby of the Borthwick's. Both the mother and the child were put to the sword and the bodies disposed of. The heartbroken young mother is said to still roam the castle hallways and spiral staircases.

There is also the story of the chancellor to the Borthwick family who was apparently burned alive for embezzling money and goods from them. His ghost has been seen by a number of people particularly around the areas of the spiral staircases.

The interesting thing about Borthwick Castle Hotel is not only the history and the number of paranormal incidents that have occurred, but the number of different people, from various countries all reporting the same manifestations. This is definitely a place to have a dramatic fright night!

If you had the chance which haunted location would you choose to sleep in?

Which one of the haunted hotels would you choose to stay in?

Haunted hotels are havens for the living and home to the dead!

This beautiful castle has stunning views over the village of Airth and the River Forth with wonderful gardens and grounds surrounding it. Much of the building we see today is the original 14th century castle. However, one of the towers dates back to before 1300. This is the oldest part of the castle and is called Wallace's Tower. This is in remembrance of the day Sir William Wallace rescued his uncle, a priest, who was imprisoned in the castle.

Descendants of King Robert the Bruce inherited the site in 1470 when Edward Bruce - second son of Sir Robert Bruce of Clackmannan - married Agnes, the daughter of William of Airth. The family of Bruce would remain in possession of the estate for many centuries.

This beautiful location has many ghosts roaming its old corridors, stairways and rooms. In particular rooms 23, 9 and 3 are said to be very paranormally active. Even when these rooms have been vacated, people have reported hearing the sound of children laughing and playing behind the doors.They may be the spirits of two small children who died in a fire at the castle in Victorian times. Other human voices heard are those of a woman screaming and sobbing in terror. This is alleged to be the voice of a maid servant who, for some unknown reason, was brutally attacked by the master of the house.

Other paranormal activity includes doors being opened and closed by unseen hands and objects being moved about by an unseen force.

There is also the ghost of a dog that has been observed in many areas of the castle. On occasion, although not seen by witnesses, they have nevertheless felt the dog as it likes nothing better than to nip at people's ankles.

Another apparition at Airth is said to be that of either a nanny or housekeeper. She is alleged to have been the person responsible for looking after the two young children mentioned earlier - it is believed that due to her neglect the two young ones died in the fire. Her spirit is said to walk all over the castle perhaps looking for the children she should have been caring for.

You only have to look at Airth Castle to know that it just has to have ghosts and what a mixture they are! When the lights go down and the hotel settles into a midnight stillness, I think this castle hotel would certainly give a few guests a good fright night!

Locations of the haunted hotels 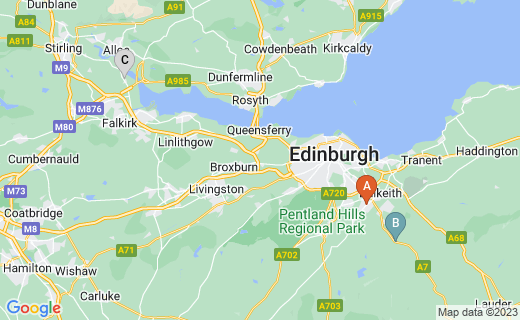