Ghost Cavalry of the Great War Captain Cecil Wightwick left us an account of the strange things that happened between April and August 1918 near Bethune (France), in the middle of an area of front line trenches between the city of Ypres (Flanders, Belgium) and the French towns of Arras and Bailleul.

Captain Wightwick was responsible for the intelligence in this sector

... and made headquarters in Bethune, a bright little town that was practically untouched by the Great War. The British soldiers had been fighting in the trenches for weeks without rest or relief. They had many heavy casualties, the men and their reserves were exhausted.

Portugal had come in the war on the side of the Allies and had raised an army. In March 1918 Portuguese troops in France, while the enemy intensified his offensives with greater concentrations of men and guns over and over again. Towards the end of the month, CaptainWightwick was instructed that a Portuguese force would be passing through Bethune to relieve the British and take over a sector of the front. The United States declared war on Germany in 1917, and by the summer of 1918 were sending nearly every day fresh troops across the Atlantic, but these reinforcements would not be available for the front near Bethune before the middle of June. Due to vigorous enemy action, the Allied lines there were left in a "pocket" and liable to be "hemmed in". All the troops, arms, ammunition and equipment in this sector would be lost then. It was improbable that the Portuguese troops would make much difference to the plans of the enemy...

The high explosive gun fire intensified and was so tremendous that the reverberating crash of concentrated shell shook the ground and dazed the British troops, who were by now three miles behind the front line. A dense hall of shrapnel and lead fell on the Portuguese, blotting them out, causing a gap in the Allied front through which the Germans began to pour. The few Portuguese who still were alive came staggering through Bethune. To get away from hell, they had thrown away their arms and equipment.

In Britain everyone was thinking the Germans would at last get to Paris, now. People hoped that the Americans would arrive in time to stop them, and they were afraid that the English ports would be shelled by the big guns from the French coast.

"But then," said Captain Wightwick, "we remembered the Angels of Mons..." - In those dark days of 1914, the British nation was called to prayer, and heavenly creatures had saved the British troops near the Belgian city of Mons. Once again, the British had to pray together with the Americans; a united prayer from all the English speaking peoples had to get up in a call for help.

And then this strange thing happened...

The enemy shell fire directed against the town of Bethune

... shattered by now, was suddenly lifted and aimed beyond its outskirts. This was open ground without trees of houses and there were no human beings to be seen, yet the enemy gun fire increased its fury with heavy bursts of machine guns.

Captain Wightwick recalled how they all stood looking there in astonishment. "Fritz has gone out of his mind, Sir," a Sergeant said. "They're peppering naked ground! What in the world is this good for?"

Captain Wightwick went down along the canal to see what was happening there. He didn't understand why the Germans were still directing their fire to a place where there were no troops at all within sight. AsWightwick made his way over the scattered debris of a city in ruins, the fire suddenly ceased and a curious silence fell over the battlefield. A lark suddenly arose from what once was a meadow and soared up, singing a song which years later he could still hear.

The Sergeant and some men were standing near a shell hole, waving their hats and shouting: "Fritz is retiring!" - And indeed, as far as he could see, on the slight rise of the village there was a line of German troops. As CaptainWightwick was watching, this line halted, the mass formation broke and before his astonished eyes the well drilled soldiers were suddenly fleeing, frightened to death, throwing down their rifles and haversacks.

The Sergeant arrived with two German prisoners, both officers. He made a statement and declared that he and his lieutenant were looking at the open ground behind Bethune, where there was suddenly a brigade of cavalry advancing. The cavalry came right up through the drifting smoke, all mounted on white horses and wearing a white uniform.

"They must be of some of the British Colonial forces," the German lieutenant said. "Although I never heard of any white uniformed cavalry with the British..."

The shells were bursting amongst the riders and their horses, but they kept coming at a quiet walk trot, as if they were in a parade instead of on a battle field. The machine guns opened fire, raking the White Cavalry with a hail of lead, but still... not a single man or horse fell down, while they advanced steadily in the bright sunlight.

A few paces in front of his men was their leader. His hair was shining in an aura, like spun gold, around his head. His huge white charger bore him proudly, while he was holding a great sword in his one hand and his horse's reins in the other.

"The White Cavalry advanced," the German officer said, "led by their awe inspiring leader, remorseless as fate, as the incoming tide..." - It was then that a great fear fell on this Officer of the Prussian Guard, and he turned to flee, panic-stricken, like hundreds of his terrified men were doing, whimpering like children.

"There still may be fighting," the man whispered, "but the German army is broken. We have lost the war. It's the White Cavalry... We are beaten"

Captain Wightwick interrogated many prisoners; their accounts tallied with the one given by the old Officer of the Prussian Guard. And still there was not one British soldier who had seen some White Cavalry in action... 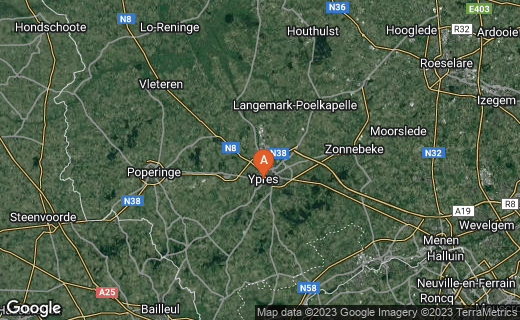