Ghosts and Legends of Washington's Hood Canal on the Olympic Peninsula

“The road beside the Hood Canal runs snaky, the Canal branching from dark waters of Puget Sound and growing even darker as it runs a black furrow east of the Olympic Mountain range… Locals know the road and stay off after midnight… Everyone gets home before the road ‘turns ugly’.”

Port Townsend, Washington author Jack Cady’s The Hauntings of Hood Canal spins the sort of tale that would cause a prudent reader to stay away from the Hood Canal. The story focuses on those who live and work along the Puget Sound area’s long snaking roads.

Cady died in 2004 and is most known for his horror and sci-fi tales, winning the Bram Stoker Award for science fiction. The Hauntings of Hood Canal is a dark novel about the small-town life of drifters and hustlers on the Olympic Peninsula, and the disruption caused by an ancient entity that lives there dragging the cars of tourists to their deaths. 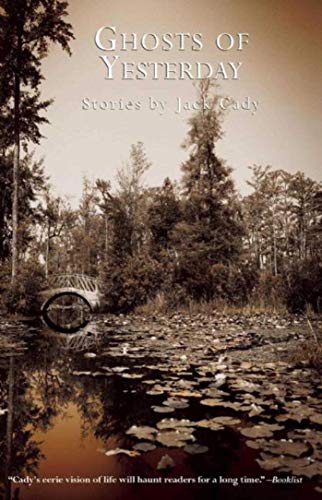 The Great Bend of the Hood Canal 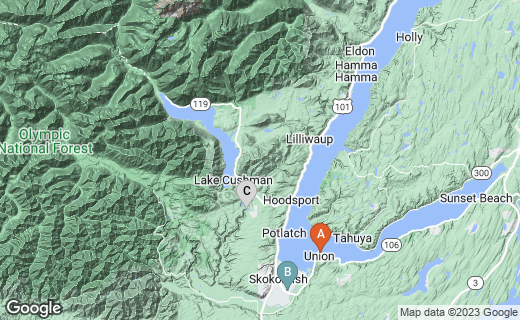 The Great Bend of the Hood Canal

Lower Cushman Dam on the North Fork of the Skokomish River

A far more popular horror story is having the opposite effect, causing people from around the United States to seek out this neck of the woods. Stephenie Myer’s Twilight, the first of a hugely popular vampire series, recast Washington's Olympic Peninsula as a vampire haven and werewolf den.

The Phoenix stay-at-home-mom discovered the Olympic Peninsula when she was searching on the web for the rainiest sun-shunning place in the United States to set her vampire stories. As a result, much of her best selling novels takes place in Forks up in Clallam County, located on the Olympic Peninsula which is formed by the Hood Canal to the east and the Pacific coast to the west.

“Vampires Thrive in Forks” reads the sign above the reception desk for The Forks Chamber of Commerce. The Forks Chamber estimates that due to the popularity of the series on average hundreds of vampire hunters each day have been driving the winding roads on the Olympic Peninsula to visit Forks during the summer months. It’s a case study for how a 'ghost story' can bring a virtual ghost town back from the dead, or as Cady’s tale would have it, lure in more fresh meat and twisted metal for the local demons.

Local businesses along Highway 101 and State Route 106 have cashed in on the phenomena by offering Twilight-inspired fare like the “Bella Burger” or simply hanging some Twilight t-shirts on their storefront to capture the attention of these vampire lovers.

The later novels and films in the Twilight series focus on werewolves, and this has increased the demand for “wolf” themed northwest Native American art. In the story Native Americans living on the Olympic Peninsula descending from a bloodline in the Quileute Tribe can turn into werewolves. 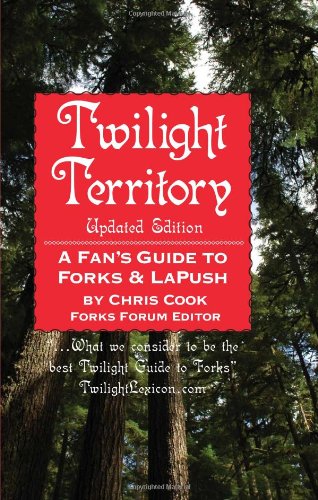 The Skokomish Nation has long lived along the great bend of the Hood Canal. They are one of nine tribes, or village communities, of the Twana that existed prior to contact in the mid-1800's. The tribe moved onto the Skokomish reservation in 1855, defined by the north and south forks of the Skokomish River.

The Skokomish have many beliefs that relate to funeral customs that deal with appeasing spirits or ghosts. When a member of the tribe passed on a ceremony similar to a funeral wake would be conducted.

Traditions detailing how to deal with spirits vary among the world's cultures and have changed over history. After contact with westerners Twana shaman incorporated many western Christian beliefs into their rituals, such as that of the Shaker Church founded in 1881 by Squaxin shaman John Slocum and his wife Mary Slocum.

Historically the Twana would be buried with their canoes which were suspended up in the old growth trees. This had to do with the belief that whatever you brought with you into the afterlife remained with your spirit as it crossed over to the other side.

Water Elementals and Mischievous Spirits of the Skokomish River

Skokomish tribal member Joseph Andrews was a traditional canoe carver and knew the places that children went to seek out the spirits in the living waters of the Skokomish River.

Andrews believed, as did many Skokomish before him, that the spirits of wood and stream would watch over and protect those that could make contact with them. Skokomish means 'people of the river' and similar to the beliefs of the nearby coastal Salish tribes the Skokomish believed in the 'recycling of the soul' or reincarnation.

Western philosophers in antiquity categorized water spirits as the undines, the name given to the large family of water elementals that includes water sprites and mermaids.

These elementals inhabit every lake and stream; each fountain is home to a sacred nymph, every ocean wave carries an oceanid.

"Man lives in the exterior elements and the Elementals live in the interior elements. The latter have dwellings and clothing, manners and customs, languages and governments of their own, in the same sense as the bees have their queens and herds of animals their leaders."

The Skokomish tales detail encounters with these spirits at waterfalls and in the high mountain lakes, many of which now makeup the realm of the Olympic National Park. A number of the place names in the Olympics have been taken from Chinook jargon, a common trade language made up by Northwest tribes after contact with westerners.

A large number of these place names originated in stories about contacts with otherworld entities. In the book

Gods & Goblins: A Field Guide to Place Names of the Olympic National Park many of their ghostly stories are still preserved.

Do You Think We Should Protect the Wild Olympics?

Should our ancient forests and rivers on the Olympic Peninsula be protected?

The Spirit of the Wild

Hood Canal community members are working for permanent wilderness protection of more than 126,000 acres of old growth forests in the Olympics and 19 Olympic Peninsula rivers and their major tributaries as Wild and Scenic.

As of 2014, there are only six designated Wild and Scenic Rivers in Washington state and none on the Olympic Peninsula. There are more than 50 rivers in Oregon with such designations. Wilderness is the strongest level of protection on federal lands and a designation requires an Act of Congress (legislation) and the president’s signature.

"The Olympic Peninsula’s rivers are quintessential wild and scenic rivers. They are home to some of the strongest remaining runs of wild salmon and steelhead in the Northwest and are the lifeblood of Puget Sound. Yet many of these rivers, such as the Hamma Hamma and the Dungeness, lack permanent protection against dams, hydropower, water storage projects, and other threats. Wild and Scenic designation would ensure that these rivers remain wild and free-flowing rivers for generations to come."