Where can you find a chapel with a seat reserved for a ghost, a secret room full of skulls and a veritable army of ghosts? The answer lies in Angus, Scotland, near the village of Glamis. Here you can find the ancestral home of the Earls of Strathmore and Kinghorne: Glamis Castle.

Glamis is also familiar to Scots as its image features on their bank notes. However, the castle has another claim to fame: it is said to be one of Britain’s most haunted places.

Britain boasts many haunted sites, but Glamis is notable for the sheer number of ghost stories and legends that have sprung from its walls. From vampire children to disfigured apparitions, Glamis has more than its fair share of hauntings and tragedies. Judge for yourself whether Glamis Castle can claim its place on the most haunted list.

The Royal Family and Glamis Castle

Glamis Castle is famous as the birth place and family home of Elizabeth Bowes-Lyon, the late Queen Elizabeth, the Queen Mother. Her younger daughter, the late Princess Margaret, was also born at the castle

Several of the Bowes-Lyon family, including the Queen Mother’s brother Sir David, are said to have seen ghosts at the castle.

The Monster of Glamis

Since the early nineteenth century there have been rumours about the Monster, or Horror, of Glamis. The stories were more widely circulated in the 1960s when a book was published about the Queen Mother’s family. According to the accounts, a child was born to the Queen Mother’s great-grandparents, Thomas Bowes-Lyon, Lord Glamis and his wife Charlotte. Lady Glamis’ midwife recounted that the boy, who was the couple’s first son, appeared well, though horribly malformed, at his birth in 1821. However, a few days later the family announced that the baby had died only hours after his birth. Doubts about his death began almost immediately; his baptism was recorded, but no gravestone was erected. Villagers said that the child, christened Thomas, was alive and being kept in seclusion in a secret room due to his monstrous appearance. Lord Glamis named his next son Thomas too. In time, he succeeded to the Earldom and, if rumour is to be believed, became his unfortunate brother’s keeper. The Monster was said to have become immensely strong and lived for over a hundred years. On his death, he was said to have been put in a coffin and walled up in his secret room. His ghost is alleged to walk along the “Mad Earl’s Walk”, an area on the rooftops where it is claimed he was exercised during his miserable life.

Where is Glamis Castle? 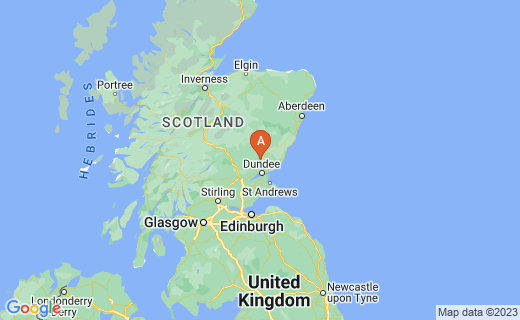 The Grey Lady in the Chapel

Thomas Bowes-Lyon is not the only deceased member of the family who remains in residence at the castle. Janet Douglas became Lady Glamis in the early sixteenth century. After the death of her husband, she was accused of witchcraft and the murder of her husband by poisoning. The charges were politically motivated as Lady Janet was a member of the Douglas family who were at the time enemies of King James V. She was burnt at the stake, in front of her young son, on 17 July 1537. Her spirit apparently found its way back to Glamis Castle where it is seen in the form of the “Grey Lady”. The ghost is said to appear in the clock tower to warn of trouble for the Bowes-Lyon family. She is also a visitor to the castle chapel, where a seat is reserved for her.

Earl Beardie and the Devil

The castle also plays host to a never-ending card game between “Earl Beardie” and the Devil. “Earl Beardie” has never been definitively identified, but he might be the Alexander Lyons, 2nd Lord Glamis or, more likely, Alexander Lindsay, 4th Earl of Crawford.

Legend has it that the Earl, a keen gambler, refused to stop playing cards on the Sabbath, declaring that he would play with the Devil himself. Soon after, a stranger appeared at the door and was taken to the locked chamber where he joined the Earl's game. The Devil had arrived. He took the Earl's soul and condemned him to continue his card game until Doomsday.

Ghosts in the Castle Grounds

Outside the castle there are more ghosts. Jack the Runner simply sprints across the lawns on moonlit nights, whilst a more chilling sight is the lady who wanders the grounds pointing to her horribly mutilated face. It is said that she is the shade of a maid who witnessed a crime committed by one of the Earls. He silenced her by cutting out her tongue whereupon she died of shock.

Glamis Castle has many tales that involve secret rooms. Besides the story of the sequestered Monster, there is a tradition that the Bowes-Lyon family is cursed with a vampire child once in each generation. These children are condemned to be hidden within the castle’s walls. Whilst these stories may be fanciful, there is an element of truth to them. The castle does have secret rooms; house party guests once hung towels in all the windows and discovered when they went outside that towels could not be seen at every window. Somewhere in the castle is the secret chamber in which the Ogilvie family met their doom. These unfortunate people sought protection from their enemies in the castle, but instead were walled up alive in a room. Their skulls are said to be in tact inside the small room.