Born and raised in Malaysia, Mazlan is proud of his Malaysian and Asian heritage and likes to share its mysteries, culture & current issues.

In this modern time, religious sacrifice is usually in the form of fasting, as a sign of reverence and submission to God. But there are certain communities that will take this even further to a point of inflicting pain to oneself. The Easter Traditions in the Philippines is one example. But more on this later.

My personal experience is watching the Thaipusam celebration.

Every year around February, Hindus of Tamil origin will celebrate Thaipusam and it is celebrated not only in the southern part of India but also in Malaysia. In this Thanksgiving festival, devotees will do sacrificial acts and some are in the form of painful body piercing.

Where is Crucifixion Held in the Philippines?

It does not happen throughout the Philippines, as I had initially thought.

The re-enactment of Jesus Christ's crucifixion and self-flagellation happen every Good Friday only in San Pedro Cutud and San Fernando, in the province of Pampanga, about 1.5-hour drive north of Manila.

Just like the Thaipusam celebration in Malaysia, these events attract hundreds of local and foreign visitors. As usual, the Holy Week - Maundy Thursday, Good Friday, Black Saturday, and Easter Sunday are the busiest time of the year for this area. The town will be busy preparing for this important occasion and some of the devotees will prepare themselves by going into deep meditation.

The crucifixion and self-flagellation in the Philippines are part of the religious ceremony to atone oneself of their past sins, for a vow that they had made or to say thank you to God. This is part of the Easter celebration in parts of the Philippines. Although not sanctioned by the church, these have now become sacred practices in the week-long celebration leading to Easter.

To feel the pain and suffering of Jesus Christ, the devotees will carry the wooden crosses before re-enacting the crucifixion. Other devotees will parade the streets and inflict self-flagellation with bamboo sticks.

This mortification of the flesh or practices of extreme religious sacrifices is also carried out in Mexico. In other religion, as mentioned earlier, it is practiced by Hindus of Tamil origin in their Thaipusam celebration, and by the Shi'ites in Pakistan, Afghanistan, Iraq, and Iran, but for a different cause. 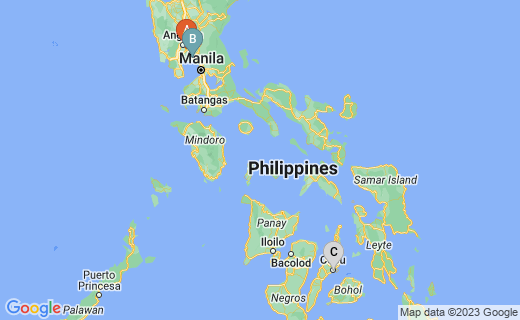 While most Christians believed that Jesus was crucified on the traditional two-beamed cross and not on a single upright stake, the placing of the nails whether in the hands or wrist is still unclear.

The crucifixion in the Philippines, hence uses the two-beamed cross with a footrest, as it is easier for the devotee to ‘balance’ himself without exerting additional pain.

The placing of the nail is done on the hand and not on the wrist. This is also for a practical reason as the wrist will draw more blood and the possibility of fracturing the bone is higher.

The theories on three, four or more nails were used in the Crucifixion of Christ remained uncertain. Again, for a practical reason, the crucifixion in the Philippines uses four stainless steel nails, one on each hand and foot. This is carried on Easter Sunday in the Philippines.

How It All Started

The re-enactment of Jesus Christ’s crucifixion started as the staging of Via Crucis, with Pedro Cutud as the artist who was 'crucified'. This street play by poet-playwright Ricardo Navarro was performed in Pampangan during the week leading to Easter, in 1955.

The actual live crucifixion only happened in 1961 when Arsenio Añoza, made a vow to nail himself to a cross every Holy Friday for fifteen years if God would intercede for him.

The news quickly spread and now more than twenty people will do the crucifixion as they see this as another expression of penance. This, of course, attracts many visitors and media, both local and foreign to this unique Easter Traditions in the Philippines.

The Commercial Side to this Holy Friday

There is also money to be made from this and soon people do makeshift shelters selling drinks, foods, sunglasses, and religious souvenirs. Even multinational companies come in with sales of burgers, ice-cream, soft drinks and in sponsorship. Travel agencies will be busy promoting the event.

Therefore, what started as a personal religious agenda, has now become an annual tourist and media event, which has now exceeded more than 55+ years of continuous practice.

Many that took part in the crucifixion had been doing it for years.

Arsenio Añoza, a faith healer who started the 'craze' did it for fifteen years from 1961 until 1976.

Ruben Enaje was crucified 28 times and in 2015 was his 29th attempt. His vow for nine years started after surviving a fall. Then, he continued with another nine years for the cure of his asthmatic daughter. His third nine years were for his wife. 2013 was supposed to be his last year, but as there is no suitable replacement to take over from him, he decided to continue his yearly Holy Friday tradition. His vow this time is for his children: for good job and better health.

Although all steps are taken to ensure safe and trouble-free occasion, things can always go wrong.

In one incident, a devotee lost a large amount of blood after his feet were nailed, probably striking the blood vein.

After many years of being crucified, the holes in their palm have made it less painful whenever nail is driven in during the rituals

The Passion of Christ will not be complete if there are no scenes of flagellation.

So every year, many will walk barefooted on the hot tarmac road and flagellate themselves in a procession that can last for hours. While Roman soldiers whipped Jesus Christ, these flagellants, who are mainly men from the lower income group, will lash their own backs with bamboo flails until raw bloody flesh are exposed.

Interestingly, all of the flagellants are hooded. As to why they had to cover their faces to hide their identity, remain unclear.

It was reported that in 2013, more than 3,000 flagellants took part in this unique annual Easter Traditions in the Philippines.

Self-Flagellation and the Catholic Church

The practice of self-flagellation is not peculiar to these provinces in the Philippines. It happened throughout most of Christian history.

Today, self-flagellation is also done publicly in Mexico and parts of Peru.

The annual crucifixion, as act of repentance or as thanksgiving, is a practice discouraged by the Philippines Catholic Church.

"Our identification with Christ should be internal...more about spiritual renewal"

Fr. Rex Reyes, general secretary of the National Council of Churches on the other hand, wanted to ban the crucifixion rite.

What's Your View on the Crucifixion?

Bishop Marino Inong of the United Church of Christ said it is akin to fanaticism and fatalism.

So Why They Continue to Do It?

Despite these condemnations by the Church, the devotees continue to practice the rites as they believe it is a personal matter between them and God.

My Other Religious Festival Articles

For more festivals by the Hindu and Chinese communities, check the following articles on:

Christianity in the Philippines

To further understand these practices of religious self-mortification, let’s look at the country’s history.

Christianity came to the Philippines in the form of Ferdinand Magellan, who colonized the archipelago from 1521 onward and entrenched it with Hispanic Catholicism. Today, the Philippines is the largest Christian country in Asia with more than 80% of its population belonging to the Catholic faith.

However, Catholicism is mixed ranging from deep understanding to superficial understanding, especially among the rural folks. This resulted in some remnants of cultural, traditional and pre-Hispanic rituals still being practiced.

As the country progresses and prospers the gap between the rich and poor also widen and the poor, left to fend for themselves. Filipinos are religious people and in this predominantly Catholic Philippines, religion is the source of comfort.

This may have a bearing in how minority group seeks religious blessing, forgiveness, and gratitude.

Will You Go & Watch These Crucifixion & Self-Flagellation?

Are you brave enough to witness this unique Easter celebration in the Philippines, live? Will you join the hundreds of tourists that travel far and wide and be part of this emotional journey of faith? Can you withstand the heat and dust?

Me? I am not sure, but I have seen the live Thaipusam celebration in my country, Malaysia, which can be described as a 'gory test of faith'.

I was told this re-enactment and flagellation can be just as gory and can make you feel unsettled.

But luckily it is not as gory and graphics as in Mel Gibson's The Passion of the Christ!