The Mission Cemetery in Orange County was the burial ground for the indigenous people, mostly Juaneño Indians. It was built for the purpose of serving them in 1776. The first recorded burial was in 1781. There are 2,000 unmarked graves here. In 1850 burials were stopped and the graves relocated to the east of the Mission. In 1934 an exception was made and Father John O’Sullivan was buried there. He had directed the restoration of the Mission during his 23-year tenure there.

Some consider San Juan Capistrano Mission Cemetery to be the most haunted place in California. The Mission Cemetery is not open to the public and is considered sacred ground. Still, families visiting loved ones have witnessed various apparitions.

One such ghost is called The White Lady. She has been seen at the cemetery gate since the early 1900s. A cemetery spokesman, Jerry Nieblas, said the woman would come up to visitors and ask for help in looking for her children. Nieblas said, “There’s nothing spooky about her, but she’s crying.”

Another ghost is a beautiful young woman with long black hair that glides throughout the cemetery. She is seen wearing a long dress of white that ends in a mist around her feet. The identity of this spirit is possibly a young woman who died on the front porch of her lover who had jilted her in the 1890s. She had committed suicide by drinking strychnine.

There is a beautiful young woman called La Llorona (The Weeping Woman) who had many illegitimate children. She couldn’t take care of them and drowned them in the river. She wanders the bank of nearby Trabuco Creek crying for her murdered children.

Located in San Bernadino County, Hillside Memorial Park was established in 1886, two years before Redlands became a city. It was privately owned until the city of Redlands acquired it in 1918. It sits on 50 developed acres and 13 undeveloped acres are available. There are approximately 30,000 interments.

One strange thing that happens here is that car horns sometimes honk by themselves. Another thing, that would be a little funny if it weren’t so creepy, is that if you throw a ball over the wall into the cemetery something throws it back, even when there is no one inside the cemetery.

A woman told a story of going to the cemetery with her husband on Halloween just to hang out and tell ghost stories. A young woman she described as a “hippie chick” came up and asked if she could join them. They said she could and she sat down and the ghost story telling continued. After a while two policemen showed up and one said, “Hey, you two aren’t supposed to be here, you need to leave.” The husband asked, “Well, what about her? Is she supposed to be here?” and motioned over to the hippy chick. The officer said, “No, that’s why we asked the two of you to leave.” The couple looked over and she was gone. They were in fairly open ground and there was no way she could have left without the police seeing her. The ghost, that they didn’t know was a ghost, was gone.

The Agua Mansa Cemetery has 786 interments and is near Colton in San Bernadino County. Settlers from Abiquiu, Mexico created La Placita and Aqua Mansa along the Santa Ana River in the 1840s. The first known burial was in 1852, the last in 1963. The cemetery is now a museum branch of the San Bernadino County government after being acquired in 1967.

There are many stories of ghosts from this cemetery and the road beside it. One man was driving by the cemetery one evening and saw something he says he’ll never forget. “To this day, I could swear I saw a guy walking his dog, and it looked like the guy had no head.” There was a man walking his dog that was killed on this very stretch of road. There have been many reported sightings of the man and dog.

Fatal car accidents along this road have been blamed on two ghosts that were killed here execution-style.

There are a few tales of drivers picking up hitchhikers and then when they drop them off they just vanish. It is ironic that “Agua Mansa” is Spanish for “Gentle Water.”

Stewart Sunny Slope Cemetery is located in the city of Beaumont in Riverside County. There are a little over 2,000 interments.

There are several different spooky things that happen here. Cold spots, eerie feelings, and unexplainable noises are reported often. When standing next to some particular headstones there can be the feeling of a cold hand touching you.

There is a groundskeeper that can be seen walking around, but if you try to approach him he will go into one of the sheds. If you follow him inside there is no one there. He only appears to people who are alone.

It seems the ghosts are more active around small groups of people, especially around children and females.

Fairhaven Memorial Park in Santa Ana, Orange County, was created August 28, 1911 by Oliver Halsell and a few other businessman. It is located on 73 acres and has over 50,000 interments.

There are several ghosts in this cemetery. One is known as the “morning child.” It is a toddler that only appears in the morning and is seen crawling toward a specific oak tree. The baby vanishes if anyone comes close to it. The sound of babies crying can be heard at any time.

There was a wall of children’s crypts on the lower level of the mausoleum. People claim to have heard the cries of children in the hallway. The crypts have since been moved to another location. It is not clear why the crypts were moved.

Imperial Historic Cemetery is probably the oldest cemetery in Imperial County. Imperial County was the last county established in California in 1907. It has 205 interments with the first being January 1, 1866 and the last on June 19, 1949. The cemetery has not been kept up and has been subjected to some vandalism. There are only 30 grave markers remaining.

The cemetery is said to be guarded by hooded monks at the entrances. Balls of red and blue lights are seen. Camcorders have a tendency to turn themselves off when ghost hunters are investigating the cemetery.

Fallbrook Masonic Cemetery is in San Diego County and has a little over 2,000 interments. One of which is Hall of Famer outfielder Duke Snider. Fallbrook is not on any major highway route and is situated immediately east of Camp Pendleton. It was a stagecoach stop on a run from Temecula to San Diego.

This cemetery has a long history of hauntings. Visitors claim touching the trees causes them to feel a hot surge of energy. There are also reports of a young woman wearing a black dress. She floats along the ground and leaves flowers on the grave of a loved one. 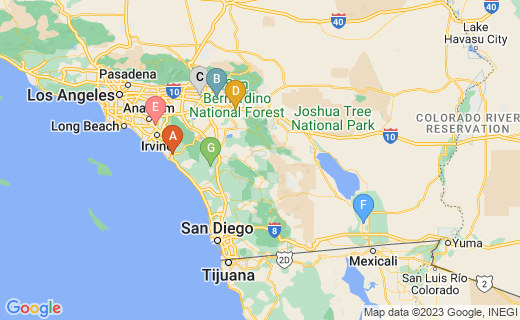