You’ll notice one of the most haunted cemeteries in Arizona is missing from this list. To read about Boot Hill Cemetery in Tombstone visit Really Haunted Cemeteries. The link is at the bottom of article.

Evergreen Cemetery is in Tucson in Pima County and has more than 30,000 interments on 93 acres. The cemetery started in 1907. Between 1914 and 1916 headstones and tombs from the Old City Cemetery were moved to Evergreen. Quite a few graves of the founding pioneers of Tucson are located here.

Many cemeteries have a history of hearing voices and seeing spectral images. Evergreen has those too but not always. Sometimes the exact opposite happens. People have reported about being in the cemetery and feeling a total stillness that was quite unnerving. There would be no sounds at all, like a clear dome had been placed over the whole place, hearing nothing from the outside world and not even a wind to stir the leaves on the ground.

There is a section of the cemetery where the sounds of young children running and playing can be heard quite frequently. One woman even claimed to have had her hair pulled by someone, or something, she could not see.

Prescott National Cemetery is in Yavapai County and has around 6,300 interments. The original cemetery was at Fort Whipple near Del Rio Springs in 1864, but was moved soon after. It relocated again five years later because flash floods washed out some of the graves. That is probably the cause of the 25 unknown graves. In 1999 the Prescott National Cemetery was added to the National Register of Historic Places.

There have been many sightings of the ghost of a little girl called Angeline. The story is that she died from some type of plague while traveling by wagon train to the west some time in the 1800s.

There have been tiny handprints found on cars visiting the cemetery. A few miscreants have had the bright idea to steal her headstone. Various misfortunes have befallen those who have tried.

Angeline has also been seen a few miles away, presumably looking for her mother.

The Clear Creek Church was built near Camp Verde in Yavapai County. Construction began in 1898 and it took almost five years to complete. The cemetery sits on five acres across the street from the church. It has close to 1,400 interments. The church closed in 1913 when a new church was built closer to town.

Several ghosts are seen here. One is that of a 17-year-old girl who committed suicide in 1868. She flits from tombstone to tombstone as if looking for a particular one. One would have to wonder why since she died thirty years before the cemetery was built. Maybe she’s looking for a family member.

There are also two men who wander the graveyard together. They could possibly be two would-be robbers who tried to rob the Winfield Mercantile and were shot and killed for their trouble.

On many nights there is a strange mist hanging over just the cemetery. The mist disappears outside the gates.

Tumacácori Mission Cemetery only has seven interments. The dates range from 1780 to 1961 with one unknown. The one unknown grave has a cross for a marker and all it says is “Soto.”

The mission, the first in what is now Arizona, was founded in 1691 by Jesuit priest Eusebio Francisco Kino. It was built on the eastern side of the Santa Cruz River. In 1751 there was a revolt by the Pima Native Americans that killed 100 settlers and two priests. The mission was rebuilt across the river after that.

The most common experiences here are the sightings of priests in the cemetery and around the old mission. One priest is seen holding a rosary and dragging a bell on a rope. A man opened a door after hearing a knock and was shocked to see a ghost soldier in a uniform from the 1800s and with a feather in his hat.

The Evergreen Cemetery was established in 1892 in Bisbee in Cochise County. Graves from the Old City Park Cemetery in Brewery Gulch were moved here in 1914 because they were located on a hill above the town’s drinking water wells. There are over 14,000 graves in this cemetery.

A man named Mike claimed feeling “dizzy and ill” when standing near a certain group of tombstones and then feeling better as he moved away from them. The feelings would return if he got close to the graves again. A woman at a different time also described this feeling. She said they were at tombstones just to the right of the entrance.

One ghost seen here is an old man. He is only seen around dusk and appears solid, just like a living human being. That is, until he vanishes into thin air.

Holbrook Cemetery is located in Navajo County and has close to 3,000 interments. It is bisected by a driveway running north and south. The east side is lush and green while the west side is dry and gravelly. The western side contains some extremely old headstones that are beautifully decorated with interesting items such as jewels and petrified wood.

The ghostly occurrences here are very typical of a haunted cemetery. Voices are heard when no one is around, the same goes for footsteps. There are also strange lights reported here.

Cottonwood Cemetery is in Yavapai County and has almost 3,000 interments. It dates back to 1892 when Mr. & Mrs. Alexander Strahan gave a tract of land to the local school district to be used for a public graveyard and school. In 1973 the town of Cottonwood took over the maintenance and administration of the cemetery.

The only ghosts seen on a regular basis here are a woman and several young children. They are also seen quite regularly at nearby Cottonwood Elementary School.

Cherry Cemetery is located in the mining town of Cherry in Yavapai County. The cemetery has 56 interments with dates ranging from 1898 to 2007. In its heyday Cherry had a population of around 400. Today it’s a small vacation-home and retirement community.

The most common sound in the desolate cemetery is that of babies crying. There are several graves (not counted in the 56) that have a marker with just one word on it, “Baby.”

Mountain View Cemetery is also known as Williams Cemetery. It is located in Coconino County off historic Route 66. It has around 2,500 interments.

There is supposedly a high presence of spirits here but nothing concrete. Strange glares do show up in photos.

Holy Hope Cemetery was founded in 1907 and is the oldest Catholic cemetery in Tucson. It has around 23,000 interments.

One ghost is a little girl that seems lost. She roams around from one grave to the next crying pitifully. 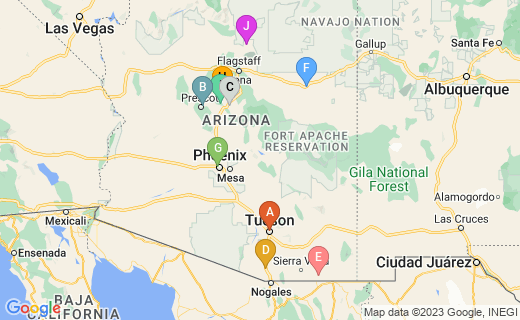