Haunted Cemeteries in Indiana Part One

Lake Prairie Cemetery is near Lowell in Lake County. There are roughly 500 interments dating back to 1854.

The southern half of the cemetery is the oldest and that is where most of the ghostly phenomena occurs. There have been unexplainable mists and different colored orbs reported here. Ghosts of townspeople from the past are seen regularly.

Posey Chapel Cemetery is in the town of LaPorte in LaPorte County. There are roughly 500 interments dating back to 1838. The Posey Chapel was built in 1841 for the Methodists in the community. The church was destroyed by arsonists in 1972 and never rebuilt.

Legend has it that another church had stood here in the mid 1800s and that it too had been a victim of arsonists. The preacher at the time was so distraught he hung himself from a tree in the churchyard. Sometimes you can still see him there.

This is supposedly a very active cemetery when it comes to orbs, mists, and disembodied voices.

Ewald Cemetery is the official name of this cemetery, but it is commonly known as Little Egypt Cemetery. Located near Bremen in Marshall County, it has a little over 100 interments. The oldest marked is that of Alfred Knobloch in 1852.

One legend here is if you throw a nickel onto one of the babies’ tombstone, you’ll hear the baby crying. You can find it by looking for all the nickels on the ground.

There is sometimes a fog in the cemetery that doesn’t go past the fence surrounding the graveyard. There is almost always a feeling of being watched.

A bridge next to the cemetery has the reputation of being a “troll” bridge. Several visitors have reported being chased by a “tall dark thing” that emerges from under the bridge.

One family told a story of visiting the cemetery when a big black car came barreling through the adjacent cornfield. They jumped in their car and drove away. The black car chased them until they had passed the troll bridge and then disappeared.

Tillet Cemetery is also known as Hookman’s Cemetery. The oldest marked grave was John M. Porter in 1819. There are about 150 interments here. The cemetery is located on Lovers Lane Road in Peru, Miami County.

The reason the cemetery is known as Hookman’s Cemetery is because there is a local legend that a man with a hook for a hand roams the area looking for someone to attack.

There are cold spots and areas of thick fog that seem to appear in an instant.

Mount Hope Cemetery is possibly the third largest cemetery in the state with over 81,000 interments. Located in Logansport in Cass County, the dates go back to the early 1800s. It has been known by many names, including Catholic Cemetery, Hebrew Cemetery, Mount Calvary, and Saint Vincent Cemetery.

There are no horse farms anywhere nearby, but the sounds of horses galloping or neighing are heard quite often.

Sometimes there is the sound of someone whistling when no one is around. What makes it even odder is that the whistle seems to echo.

There are a few mausoleums here and one has a very strange inscription. It reads, “Knock three times and they shall come.”

One ghost has been around since the beginning. Back during the era of the steam engine there was a place in Oxford for trains to stop and get water. One night during a stop the passengers and crew heard a mournful sound coming from the direction of the cemetery.

They were trying to see what could possibly be making that sound when a white, human form, came floating into view heading toward the train. Many of the passengers were frozen with fright. Some of the women started screaming. The crewmen worked as fast as they could to get the water they needed.

All at once the apparition stopped, turned around, went directly back to the cemetery and disappeared into a grave. Some of the crew refused to make that run at night and some even switched to other trains that didn’t stop in Oxford.

A few nights later it happened again, but this time the train refused to move when the time came. For several minutes the wheels were just spinning on the tracks. The train’s crew refused to stop there any more.

There were some townspeople who claimed it was a prank and even explained how it was done. Most of the witnesses did not believe them.

Memory Gardens Cemetery is located in Newton Township in Rennselaer in Jasper County. There are around 3,000 interments going back to the early 1900s.

There is a haunted statue of a saint here. It is located at the very back of the cemetery. The saint seems to be keeping his eye on visitors. His head turns and sometimes his hands and arms move.

Crown Hill Cemetery was dedicated in 1864 and is currently the third largest cemetery in the United States. It sits on 555 acres in Indianapolis with 25 miles of roads inside the cemetery. It was added to the National Register of Historic Places in 1973. There are 172 famous interments here including President Benjamin Harris, three vice presidents, 13 governors, 18 congressmen, and the infamous John Dillinger.

Some investigators have called Crown Hill Cemetery the most haunted cemetery in the country. Whether or not this is true, it does have one of the most disturbing stories anywhere. Section 37, called Community Hill, is Crown Hill’s “dirty little secret.” In 2006, a college student made a horrifying discovery. Section 37 was a mass grave containing the bodies of 699 orphans who had died at local orphanages at the turn of the 20th century. The tombstones have no names, only numbers. These poor children had been stripped of their names in life and only had a number. In 2007 a horrific EVP (Electromagnetic Voice Phenomena) was captured of hundreds of children screaming in pain.

The same college student who found them has worked tirelessly to give them back their identities. A plaque sits in front of the section now with the names of the children who have been identified. There is plenty of room left for the rest.

The children are sometimes heard playing on the spot that used to be their playground. There is also a ghost lady who is seen walking through the cemetery with a baby in her arms.

The Boone-Hutcheson Cemetery was started by settlers to the area in the early 1800s. The most famous of whom was Daniel Boone. The cemetery has around 1,000 interments and is located near Reelsville in Putnam County. There are at least 21 Boones and 84 Hutchesons buried here.

There are several ghosts here. One is a policeman dressed in a uniform from the 1950s. He sits beside the cemetery holding a blue light.

People have claimed to see ghost dogs here with red glowing eyes. There is supposedly also a cave where demon dogs live.

Cloverdale Cemetery is located in Putnam County and dates back to the early 1800s. There are at least 4,500 interments.

There is a legend here about seven witches who were sisters that were all considered to be quite beautiful. If you walk around the grounds seven times under a full moon the sisters will awaken. Then they will chase you away.

There have also been instances of orbs appearing and then actually following people as they walk through the cemetery. 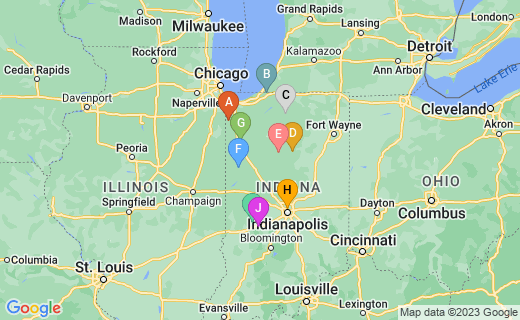