The Commonwealth of Kentucky became the 15th state in the United States in 1792. It was originally part of Virginia. There are around 40,000 cemeteries in Kentucky and it is 40,409 square miles in size. That’s roughly one cemetery in every square mile.

Lick Creek Cemetery #1 is located between Dawson Springs and Beulah in Hopkins County. It can be found on Lick Creek Road just before 6th Vein Road. There are a little over 150 interments dating back to the early 1800s. The cemetery is next to the church which is no longer in use.

Visitors have reported full-bodied apparitions, glowing eyes with no head or body, and random objects that fade in and out.

Riverside Cemetery is a large cemetery in the heart of Hopkinsville on Means Avenue. This Christian County cemetery was originally called Hopewell Cemetery, but the name was changed in 1907. There are over 18,000 interments here dating back to the 1700s. There is an entire section of unknown graves that are just marked with a number and the words “W.E. Eaton Farm Cemetery.” The famous psychic Edgar Cayce was buried here in 1945.

Screams have been heard coming from the cemetery late at night. Sometimes people are seen standing inside the graveyard and looking out the front gates. They always stand very still and are dressed in clothing from different eras. The smell of lilac is prevalent here, even in the winter.

Grandview Baptist Church Cemetery is located in Elizabethtown in Hardin County. It is also known as Kasey’s Cemetery. The locals call this cemetery “The Gates of Hell.” There are 25 documented interments going back to 1985. There are many other graves going back to the 1700s and 1800s. There was an iron and stone gate, but it is now in ruins.

There is a story here about a huge green orb that appeared in the center of the cemetery. It hovered there for several minutes and then shot straight up into the sky in a split second. Several people witnessed the event. Apparently it was a one-time phenomenon as it has never been reported again.

Rowan Family Cemetery is also known as Federal Hill Cemetery and Old Kentucky Home State Park Cemetery. It is located on East Stephen Foster Avenue in Bardstown in Nelson County. There are 29 interments dating back to the early 1800s. It is named for John Rowan who was a U.S. Representative and Senator from Kentucky and the Secretary of State of Kentucky. He was buried here in 1843.

John Rowan lost four family members and 26 slaves in 1833 from a cholera outbreak. He lived ten more years and had asked that he not have a tombstone. His parents did not have one and he said his mansion, called Federal Hill, would stand as the monument to his life. His friends ignored his request and erected a large marker that told the story of his life. A short time after his burial the marker was found knocked over. It was repaired and set up again. Again, it was found knocked over a short time later. This cycle has continued to the present day. The stonemasons who kept repairing it eventually refused to keep coming back because they thought John Rowan’s angry spirit was the cause.

Maple Grove Cemetery is located on Taylorsville Road in Bloomfield in Nelson County. There are over 1,500 interments here going back to the 1820s. The cemetery was officially established in 1897.

The ghost here is that of Ann Cooke Beauchamp. In 1825, her husband, Jereboam O. Beauchamp, murdered Colonel Solomon Sharp, who was a former attorney-general of Kentucky. During a political campaign the year before someone had circulated a rumor that Sharp had fathered an illegitimate child with Ann in 1820. Jereboam was outraged when he heard the story. He went to Colonel Sharp’s house and stabbed him to death.

He was sentenced to death by hanging for his crime. Somehow Ann convinced the guards to allow her to stay in the cell with her husband for his final few days. His sentence was to be carried out on July 7, 1826. On July 5, the couple tried to commit suicide by taking laudanum but were unsuccessful. On the day of his scheduled execution Ann convinced the guard to give them some privacy. He did so, not knowing that Ann had smuggled in a knife. They again attempted suicide by slitting their wrists. Jereboam was in the process of bleeding to death, but they carried him to the gallows and hung him anyway. While he was being hanged, Ann also died from her wounds.

They are buried together in each other’s arms. Only Ann’s ghost is seen here. She roams the cemetery itself and the road in front of it.

Hebron Lutheran Church Cemetery is on Limaburg Road in Hebron in Boone County. There are over 1,000 interments going back to the 1840s.

There are several paranormal events occurring here. There is an unexplained smell of something burning. Cold spots are frequent, as is unintelligible whispering.

Combs Cemetery is on Main Street in Jackson in Breathitt County. There are around 80 interments dating back to the early 1870s. There are at least 26 members of the Combs family buried here.

There are no specific ghosts reported here. Visitors report seeing dark human-shaped shadows darting in between the tombstones. Unusual noises are often heard with no apparent point of origin.

Warfield Cemetery is a small cemetery located on Highway 459, west of Barbourville in Knox County. There are around 120 interments dating back to Reason Warfield in 1852.

Visitors to this cemetery report feeling extreme discomfort. There are overwhelming feelings of being watched, followed, and generally unwanted. Footsteps are commonly heard, always coming from behind. Once a visitor gets the feeling they are being followed they can’t shake it until they leave the cemetery property.

Saint Ivos Cemetery is on St. Ivos Road between Simstown Road and Willis Trail. The nearest town is Lebanon in Marion County. There are roughly 100 interments. The most predominant surname here is Adams. The oldest marked grave is that of baby Leora Abell in 1869.

A common occurrence here is electronic devices malfunctioning or ceasing to work altogether. There are unexplained voices and noises, even what sounds like gunshots.

The ghosts of children are seen here also. There are approximately 25 children and babies buried here, but it is possible the ghost children come from somewhere else, because Saint Ivos is the patron saint of abandoned children. 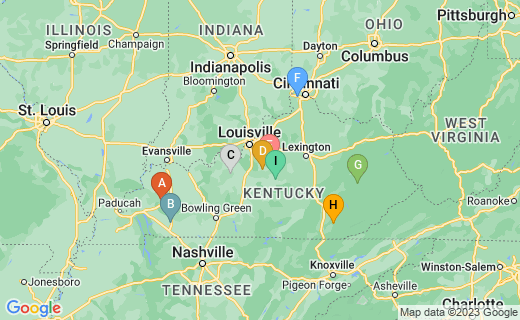