Old York Cemetery is located at the corner of York Street and Lindsay Road in York Village in York County. It is also known as Old Parish Cemetery and York Village Cemetery. There are roughly 300 interments. The oldest graves are those of settlers killed in a massacre carried out by Aberaki Indians in 1692. About 40 of the townspeople were killed and many more were captured and then died on the way to Montreal where they were held for ransom. Many of the children survived when the ransom was paid by John Alden.

There is a grave here called The Witch’s Grave. It is the final resting place of Mary Nasson. She was respected in the community as an herbalist and she was also known to be talented as an exorcist. Legend has it that she was executed for practicing witchcraft in 1774.

Her husband, Samuel, erected a headstone and footstone at her grave and then placed a heavy stone slab so that it covered her body. The legend says it was to keep her from crawling out of the grave. Samuel said it was to keep cattle from grazing there. Supposedly, the slab always feels warm to the touch and crows are often found at her grave.

Western Cemetery sits on 12 acres in the West End neighborhood of Portland. It was established in 1829. The exact amount of interments is unknown due to disorganization and a history of desecration. It is estimated to be around 6,600. The cemetery has several notable interments, including the parents of Henry Wadsworth Longfellow. The Cumberland County cemetery has graves dating back to the late 1700s.

This cemetery has suffered from neglect and desecration throughout the years. This may explain why its residents are so restless. People claim to see unidentifiable shadows and hear strange voices all the time.

Many families have attempted to dig up ancestors to move them to better locations only to find their graves were empty.

The Old Smith Burying Ground is also known as Anderson Cemetery or Smith-Anderson Cemetery. It is located in Cumberland County at the end of a long dirt road across the road from the Parson Smith Homestead on River Road in Windham. There are roughly 600 interments here dating back to the early 1700s.

This cemetery is full of the typical paranormal phenomena. There are full-bodied apparitions seen, along with orb activity, strange sounds, and weird plasma and mists. Several EVP (Electronic Voice Phenomena) have been captured.

There is a strange grave here dedicated to an American soldier. This “grave” is actually a mound that is over five feet high. It looks somewhat out of place among the other graves.

There is an area at the back of the cemetery that looks like a den for a very large animal. A male spirit is said to occupy it.

The Anderson Crypt is quite large and is ten to twelve feet tall. Knocking can be heard coming from inside the crypt and not just randomly. If you knock on the crypt door something inside will knock in response.

It seems the majority of haunted cemeteries give off a vibe that makes visitors feel unwanted. This cemetery does not.

Chute Cemetery is located in North Windham in Cumberland County. There are only 19 marked interments, the oldest of which is Captain Thomas Chute in 1770.

There are two ghosts that haunt this cemetery. Sometimes, early in the morning, two little girls are seen playing at the front of the cemetery. They are believed to be 3-year-old Catharine Chute and her sister, 5-year-old, Mary. They died two days apart and it is not known exactly how they died.

North Bowdoin Cemetery is located on Litchfield Road in Bowdoin in Sagadahoc County. There are a little over 100 interments dating back to 1804.

There is a legend about a witch that is supposed to be buried here. Her name was Elizabeth “Lizzie” Lydston. She died in 1869 at 26 years of age. Her tombstone is missing, but the base is still there. It is set apart from the rest of the graves in the center of a ring of cedar trees. The legend says if you step inside this ring of trees you will be cursed for life.

It is an established fact that three boys tried to dig up the grave and all three died in tragic accidents within a week. 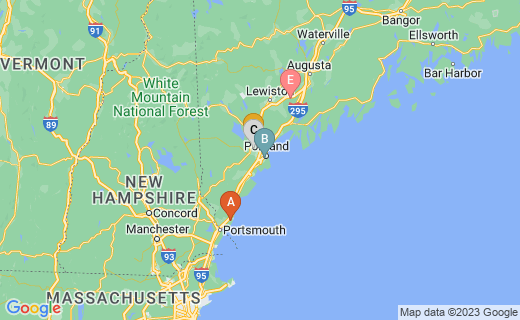 Scribner Hill Cemetery is also known as North Manchester Meeting House Cemetery. Located in Manchester in Kennebec County, there are a little over 100 interments. The oldest date found is 1834. The Meeting House has existed since 1793.

The legend here is called The Devil's Footprint. Manchester was a growing town and during the construction of Scribner Road something very strange happened. A worker came upon a rock that was blocking construction. He tried everything he could think of to move the rock but failed. He announced it was impossible and he swore to sell his soul to the devil if the rock could be moved.

The next day the worker failed to show up for work and no one could find him. He was never seen again. Even stranger, the rock had been moved far enough to allow construction to continue.

Stranger still was what the rock looked like after it was moved. There were two distinct marks on the rock that had not been there before. One was clearly the shape of a cloven foot and the other was two feet close together.

The stone is embedded in the wall of the cemetery.

Besides the Devil’s Footprint, the rest of the cemetery is known for electrical currents pulsating through the air, pockets of cold air, and dark shadows.

Pine Grove Cemetery, established in 1858, is located in South Montville in Waldo County. There are over 200 interments dating back to 1811.

The front gates of the cemetery are guarded by three dark figures. They are not aggressive, just watchful.

Visitors have claimed to hear the sound of chains rattling in one part of the cemetery and children playing in another section. There have also been reports by visitors that someone or something whispered in their ear. There are warm spots throughout the graveyard and in spots there is an almost cloying aroma of roses.

Buck Cemetery is located in Bucksport in Hancock County. There are around 100 interments dating back to 1789.

The story here is about the cursed tomb of Colonel Jonathan Buck. Colonel Buck was a Revolutionary War hero who settled in the area in 1762. Supposedly he burned a witch in a bonfire and one of her legs rolled out of the fire. Afterwards her son cursed Colonel Buck by saying, “Your tomb shall bear the mark of a witch’s foot for all eternity!”

What looks like a lower leg does appear on his tombstone. The stone has been replaced three times, but the mark keeps coming back!

Mount Hope Cemetery was built in 1834 and sits on 300 acres. It is the second oldest garden cemetery in the United States. It is located in Bangor in Penobscot County. Added to the National Register of Historic Places in 1974, the Stephen King movie Pet Sematary was filmed here. There are graves dating back to 1773.

For such a large and old cemetery it is surprising that there is apparently only one ghost here. The ghost of Al Brady roams the cemetery where he is buried. Originally from Indiana, Al Brady was on the FBI’s Public Enemies list for murder and armed robbery in the 1930s. In 1937 he and an accomplice were ambushed and shot to death in downtown Bangor. 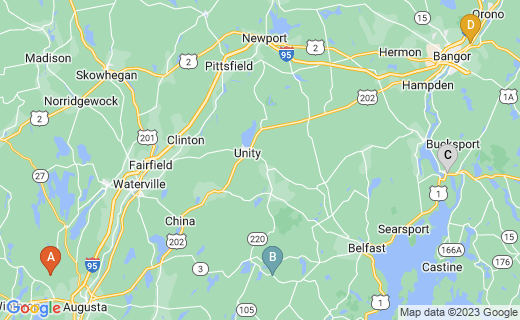