Haunted Cemeteries in the State of Maryland

Maryland was first explored by John Cabot in 1498. The first European settlements here were in 1634. It became the seventh Colony in 1788. There are almost 5,000 cemeteries in the state of Maryland which covers 12,407 square miles. Here are some of the most haunted.

The first shots of the battle were fired from Dunker Church, which had been built in 1852. Paranormal investigators have captured numerous EVPs (Electromagnetic Voice Phenomena) here. There are shadowy figures that appear here but only at the left front corner.

Apparently the whole area is pretty haunted. To the south of the church is a road called Bloody Lane. There have been many claims of unnatural occurrences along the road. Some of the things reported include the sounds of gunfire and screams, disembodied voices, various EVPs, cold spots, and strange photographs. The Burnside Bridge over Antietam Creek has also had many of the same phenomena. It is located southeast of the battlefield on Burnside Bridge Road.

Other nearby areas with activity are the Maryland Monument, located across the street from the church and both the West and North Woods. There has also been activity at the Mumma Cemetery located east of the Philadelphia

Rose Hill Cemetery is the oldest public cemetery in Washington County. Located in Hagerstown, it was founded in 1866 on 30 acres and now sits on over 100. There are almost 40,000 interments here. The Washington Confederate Cemetery is a separate cemetery located within Rose Hill. It contains over 2,000 graves of soldiers who died at the nearby battles of South Mountain and Antietam.

There is a crematorium situated at the back of the cemetery. Reports of screams and the smell of burning hair coming from the crematorium are quite common. This is the only phenomenon that is reported here on a consistent basis.

Rocky Hill Cemetery is also known as Grace Rocky Hill Lutheran Church Cemetery. It was established in 1767 with the oldest grave belonging to Anna Flinner in 1766. Located in Woodsboro in Frederick County, there are a little over 1,200 interments.

There is a legend here of a bleeding tombstone. The grave is that of Mary Ann Fox who died in 1783 when she was 34 years old. She left behind several young children. Her husband, George, remarried and the new stepmother was very mean to the children. This caused Mary’s tombstone to bleed and it still occurs occasionally to this day.

Visitors to the cemetery at night have claimed to see people there who would just disappear. One visitor claimed to have been knocked down by an invisible hand.

Another story is of a group of friends who were just walking around looking at the oldest tombstones when they all experienced a feeling of terror at the same time. They said there was no logical reason for the feeling, but they all left immediately.

Another sighting is of a brown shadow that darts from grave to grave, appearing to try to hide behind the tombstones.

Druid Ridge Cemetery is located in Pikesville in Baltimore County. There are over 8,000 interments dating back to the late 1700s.

There is a statue here that has always been surrounded in controversy. The statue is called “Black Aggie” and is actually a copy of another monument called “Grief” created by sculptor Augustus Saint-Gauden in 1891 for the Adams Memorial at Rock Creek Cemetery in Washington, D.C. It was placed in the Druid Ridge Cemetery in 1926 on the grave of General Felix Agnus.

There are several urban legends surrounding the statue. One is that once a year all the souls in the cemetery convene at the statue. There is no reference as to which night that would be.

Another is that the grass wouldn’t grow in front of the statue. This appears to be true and there is no apparent reason for the grass not to grow there. There’s also a legend that if you sit in the lap of “Black Aggie” all night you would always be haunted by the ghosts of the cemetery. There have also been reports that the statue could move her arms and sometimes here eyes would glow red.

There were so many after hour visitors and vandalism that the Agnus family donated the statue to the Smithsonian Institute in 1987. She currently resides in the courtyard behind the Dolley Madison House in Washington, D.C.

The Gardens of Faith Cemetery is located in Rosedale in Baltimore County. It is also known as Gardens of Faith Memorial Gardens. There are over 6,000 interments going back to the early 1900s.

There are two ghosts here who seem to be guarding the cemetery in shifts. One is known as the “Grey Lady” and appears just as the sun goes down. She is not threatening, just watchful. She strolls throughout the cemetery as if she is protecting it.

As the sun comes up the “Grey Lady” disappears and a gentleman ghost takes her place. He too is peaceful and just ambles around keeping his eye on things. He doesn’t like loud sounds though and will disappear if visitors make too much noise. He will reappear in another part of the cemetery.

Todd’s Inheritance Cemetery is located in North Point in Baltimore County. It is on the grounds of a farm called Todd’s Inheritance that was added to the National Register of Historic Places in 1973. There are over 45 graves here, the oldest marker is from 1717. The graves are almost all from the Todd family.

The house that sits on the property is said to be very haunted. A woman is often seen standing in the attic window with a candle in her hands. The theory is she is waiting for her soldier to come home from the war.

The cemetery is located directly behind the house. Many ghosts are seen here, almost as many as there are graves. For some reason the souls here are very restless.

The house does not have electricity to it anymore, but if someone enters the cemetery after dark the lights in the house come on.

Saint Pauls Kent Churchyard is located in Chestertown in Kent County at the corner of Sandy Bottom Road and Ricauds Branch Road. There are close to 1,000 interments sitting on 19 acres here dating back to Andrew Hanson in 1655. Famous actress Tallulah Bankhead was buried here in 1968.

One of the stories here has to do with Ms. Bankhead. When Tallulah was diagnosed with emphysema she moved to nearby Rock Hill to stay with her sister Eugenia. When she died she was buried in the Kent Churchyard and when Eugenia died eleven years later she was laid to rest right beside her. Their graves were covered with identical slabs, only the dates and names were different. The story about Tallulah’s grave is that if you lie down on top of it and press your ear to the slab you will hear her singing.

An investigator who went to check out the story for himself got to the graveyard and then he couldn’t find the grave. Frustrated, he went into the empty church and just sat quietly for a few minutes. Suddenly an idea of where he should look popped into his head. He got up and headed to the front door. Just as he reached for it the door opened, as if someone had pulled it open from the outside. He went through the door, but no one was there. He walked straight to Tallulah’s grave, but then he decided not to lie down on it. He felt he’d had enough encounters for the day.

Oxon Hill United Methodist Church was built in 1811 and in the early 1900s was moved closer to the road. The cemetery is located where the church originally stood. There are 36 interments dating back to 1854. This Prince George’s County cemetery has now been closed because no one was taking care of it.

There are three ghosts here. One is a man dressed as a lumberjack. He will go up to people and ask them why they are there. He just wanders around a bit and then disappears.

The other two ghosts are a brother and sister who are seen playing here. The only grave markers that fit their description are of the children of Samuel and Clara Uron. Four-year-old Katie died in October of 1878 and then her three-year-old brother, Daniel, died three days later. 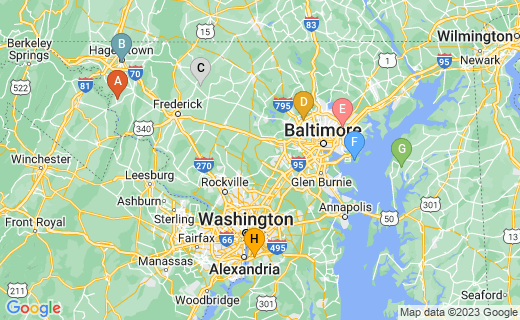