Benson Road Cemetery is located at the end of Benson Road in Richmond in Cheshire County. There are between 100 and 200 interments, the oldest marked grave dating back to 1773.

This cemetery is very hard to get to and can only be reached in a 4-wheel-drive truck or on foot.

Paranormal investigators have visited here and captured numerous EVPs (Electromagnetic Voice Phenomena) and a full-bodied apparition was caught on a trailcam left in an open underground crypt. Strange lights have also been reported here.

Woodland Cemetery is in the town of Keene in Cheshire County. There are over 10,000 interments dating back to the late 1700s.

This is a very old and very beautiful cemetery with several hauntings in it. One is a little girl that follows visitors around. She is not shy about appearing to people. The young girl just seems curious as to what visitors are doing.

There is another spirit here that is not quite so easygoing. He hangs out around the Chapel and does not seem too happy with his circumstances. People have been pinched and sometimes trip over unseen objects.

There’s a rumor that if you curse near the Chapel you will come away with the taste of soap in your mouth.

Orbs, especially blue, are common here. The sound of someone stomping around is often heard. There is almost always a strong feeling of being watched. There isn’t really a negative energy but more of a restlessness or curiosity.

There is a section where babies who died during a plague are buried. Crying is often heard coming from that direction.

Vale End Cemetery is located in Wilton in Hillsborough County. There are approximately 1,000 interments dating back to the 1750s.

This cemetery is supposedly very active. One ghost here is called The Blue Lady. She has been identified as Mary Ritter Spalding. Mary was married to Captain Isaac Spalding and died in 1808. Her manner of death is uncertain, but there were rumors that either her husband buried her alive or she was murdered by a satanic cult. She is dressed in blue and is generally seen hanging out near her own grave.

There is an unidentified man with a beard who is seen walking back and forth. It appears he’s looking for something on the ground or for a particular tombstone. Legend has it that he buried his daughter, but at some point her grave was moved and he is looking for it.

There is a short little demon spirit that lives in a den nearby. It is called a Pukwudgie. Pukwudgies are two to three feet tall and have human features, but there ears, fingers and noses are larger. They are grey in color and have been known to glow. They are from Wampanoag folklore. The Wampanoag is a Native American Tribe in the area.

Pine Hill Cemetery is also called Blood Cemetery. It is located in Hollis off Nartoff Road in Hillsborough County. There are almost 300 interments dating back to the 1700s. Many consider this to be the most haunted cemetery in New England.

The reason the cemetery is sometimes called Blood Cemetery is because of the Blood family plot in the middle of the graveyard. There are 19 tombstones with the Blood surname. Abel Blood is believed to be one of the ghosts wandering here. He died in 1867. His headstone has a hand etched into it that points upward. Supposedly at night the hand points downward.

There is a rumor that the entire Blood family haunts the cemetery because they were murdered. This doesn’t appear to be the case because of the 19 Blood graves, no two have the same death years.

There is also a little boy who haunts the road next to the cemetery. The story is that he and his family lived near the cemetery and they were all murdered. He stands on the street and tries to flag down passersby. As soon as someone stops to help he vanishes.

This is a favorite cemetery of paranormal investigators. Many EVPs have been captured here along with tons of orbs showing up in photographs. There are also dark shadow figures and unexplainable movements of trees and bushes. Some of the leaves and branches move when there is no perceptible wind.

Gilson Cemetery is located in Nashua in Hillsborough County on Gilson Road, straight across from Tanglewood Drive. There are 27 marked graves dating back to the grave of Leonard Fish in 1798. There are 8 Gilsons buried here between 1811 and 1869.

This cemetery has had several paranormal phenomena reported. Misty apparitions as well as a black-hooded figure and voices coming from the back corner on the right are common occurrences. Other strange sounds are heard throughout the property. Visitors have commented on having the feeling they are walking through water while strolling the grounds.

It seems that not only is the cemetery haunted but also the surrounding areas including the woods and areas where new homes are being built. Strange “glittering” and scary shadows and sounds are heard in the woods. There are certain areas that dogs and horses simply refuse to go into. Odd things have been seen on the football field at a nearby elementary school. In some of the older houses, windows and doors open and close by themselves and homeowners have reported drinking glasses breaking whenever they are reached for before they are even touched.

Point of Graves Burial Ground is located in Portsmouth on a point of land just before reaching the Peirce Island Bridge. It was established in 1682, but there are markers going back to 1656.

There are several ghosts here. One is Elizabeth Peirce. There are two graves with the name Elizabeth Peirce. One died in 1717 and her husband’s name was Joshua. The other died in 1732 and her husband was George. When visitors stand near the grave they have a feeling of being followed when they walk away. One paranormal investigator even reported feeling a little push on her back.

There is a double grave of two small children that some visitors say cause them to feel intense grief when they near it. Possibly they are channeling the grief the parents felt.

There is an above ground tomb belonging to Dr. William Vaughan that appears to be glowing in photographs.

Stark Neighborhood Cemetery is located off Stark Road near Conway in Carroll County. There are fifteen identified interments. The oldest belongs to General John Stark who died in 1812.

It is said that the cemetery “glows” at night and that two large, red, disembodied eyes follow people passing by on Stark Road. 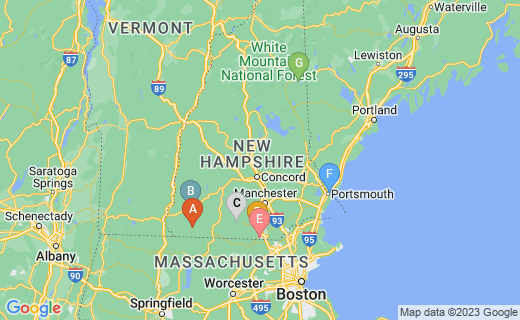