The Ringwood Manor Cemetery is one of the oldest cemeteries in northern New Jersey. Overlooking Sally’s Pond, it is in Passaic County. There are an estimated 75 to 300 interments here. The earliest markers date to the mid 1700s. It was a family cemetery and the most predominate surnames on the marked graves are Morris, Essex, and Patterson.

There is a legend here regarding a tomb located about 200 yards off the path running behind the house. The tomb belongs to Robert Erskine who was a famous cartographer for George Washington. The caretaker is constantly having to put bricks back in place because they are continually coming out. They aren’t just falling out. People have witnessed the bricks apparently being pushed out from the inside!

Shadows are seen flitting about all over the property and disembodied voices are heard.

Laurel Grove Cemetery sits on 200 acres in Totowa, Passaic County, 15 miles west of New York City. There are approximately 96,000 interments here with over 900 burials still occurring each year. The cemetery is over 100 years old.

The southernmost part of the cemetery is next to the Columbus Highway that is built over a Native American burial ground. Apparently all that traffic makes it hard for the souls to rest and this area of the cemetery is known for shadows, cold spots, and frigid breezes even on a warm day.

There is a legend here about a young girl named Annie. There is a sharp curve on Riverside Drive which runs between the eastern edge of the cemetery and the Passaic River. The legend says Annie was hit by a car on her prom night in 1965 and dragged for 50 feet on that curve. There is a high school about two miles away. The 50-foot-long bloodstain eventually faded, but ever since then the stain reappears and disappears randomly.

There is also a woman ghost dressed in a white robe that is seen here regularly. No one knows who she is, but the consensus is that she is a peaceful spirit. She is only seen at night through the gates after the cemetery has closed.

The first burial at Union Cemetery was two-year-old Robertson Day Ayers in 1859. Located in Hackettstown in Warren County, there are over 8,000 interments.

The main ghost here is 20-year-old Tillie Smith. She also haunts Centenary College where she worked as a kitchen maid before her death. In April 1866, Tillie was found dead in a field right behind the college. A 29-year-old janitor, James J. Titus, was convicted of rape and murder in the case. He was sentenced to the gallows. In May 1877, he confessed to killing Tillie during an argument, but he insisted it was an accident. He claimed that she had seduced him and that she was saying she was pregnant. Titus was desperate when she threatened to reveal the affair. His sentence was commuted and he spent 19 years in prison. After his release he returned to Hackettstown where he died at the age of 95 in 1952.

Tillie is often seen walking down the road by the cemetery and if you offer her a ride she will get in the car. Before the car reaches town, she vanishes.

There has also been a ghost dog seen here.

Mrs. Sarah Foster Hannah, president of the Washington Female Seminar, is considered the founder of Washington Cemetery. The Washington Cemetery Company was created March 3, 1853. The first interment was of baby John Morgan Hayes on November 1 that same year. Located in Warren County, there are over 5,000 interments here.

Cemetery Hill Road runs through the cemetery so that it is divided into two parts. The smaller part has S. Lincoln Avenue on the other side. Three of the largest tombstones in this section are of a man, John Castner; his wife and child, Maria and Mary; and his brother-in-law, John P. Parke. They were all murdered in 1843 in what was known as the Changewater Murders.

Joseph Carter, Jr. and Peter Parke were tried and convicted of the crime. It took two years and four months for the trial to end. Both men maintained their innocence to the very end. Most people around at that time had serious questions about their guilt.

The tombstones are very weathered and hard to read, but reference is made to “the wrath of God coming down upon those who did the murders.”

The family can be heard screaming at times but are never seen. Orbs have been seen with the naked eye and caught on film.

Alpine Cemetery sits on 30 acres in Perth Amboy in Middlesex County. It has over 5,000 interments dating back to the late 1730s.

This cemetery does not have any specific hauntings. Dark shapes appear and disappear, most often on rainy nights. Cold spots are prevalent, especially at the far end at the back. There are also three figures that are always seen together. Again, they are only seen on rainy nights. They disappear shortly after being seen.

St. Mary’s Cemetery is located in Perth Amboy in Middlesex County. There are over 3,000 interments dating back to the early 1800s.

The sound of someone running through leaves is often heard, but no one is ever seen.

Rose Hill Cemetery is located in the borough of Matawan in Monmouth County. It has over 2,000 interments dating back to the early 1700s.

This cemetery has all the paranormal happenings that you would expect to find in a haunted cemetery. Many EVP (Electromagnetic Voice Phenomena) recordings have been captured here. There are many cold spots and locations that cause feelings of dread. Orbs and ectoplasm are commonly seen. Many people have claimed to be touched by invisible hands.

There are two people who haunt this cemetery who met an unusual end. On July 12, 1916 11-year-old Lester Stilwell was playing in the Matawan Creek with friends when they saw what they thought was a board or a log. They moved a little closer and then they saw a dorsal fin. The kids scrambled for the bank, but the shark grabbed little Lester and pulled him under.

The children ran to town as fast as they could to get help. Several men, including 24-year-old Watson Stanley Fisher, ran toward the creek. The men didn’t really believe the story about a shark, but they knew Lester had epilepsy and they thought he might have had a seizure and fell into the creek.

Fisher found Stanley and was in the process of bringing him to shore when the shark bit him. He lost Lester and the bite to his thigh proved fatal when he bled to death at the Monmouth Memorial Hospital. Lester’s body was found 150 feet upstream.

Marlboro State Hospital Cemetery is located in Marlboro Township in Monmouth County. There are 925 interments dating back to 1931. The hospital opened in 1931 and closed in 1998.

The cemetery was started across the street from the hospital in an open field. It was mainly for people who had no family to claim their bodies after they died. The graves are marked with a plain stone marker with a number on it. There is a plaque with a list of the numbers with their names and death dates.

This cemetery has been investigated by experts and they have found some activity. Many EVPs have been captured. There have been reports of whistling noises, feelings of being watched, and an unexplainable rotten stench.

There was a slaughterhouse on the property at one time and some claim to see shadow people where it once stood. 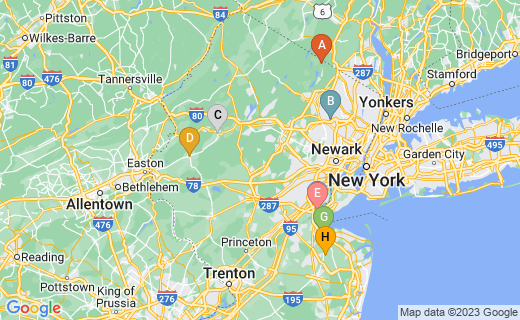 Lakeview Memorial Park is located in Cinnaminson in Burlington County. Incorporated on December 31, 1929, the first burial was in 1931. There are over 27,000 interments.

The cemetery has a section that is especially for children. There have been many sightings of little ghost boys and girls playing in the area. Sometimes they even leave footprints.

There is a tower that seems to be haunted also.

Berry’s Chapel was started by John Berry. He lived in Quinton in Salem County and decided to build a Methodist church for the African American community. There are stories that this church was a stop on the Underground Railroad. The church was abandoned in 1923 when the congregation moved to a new, more accessible site on Bridgeton Pike.

The story is that Reverend Berry was hung by the KKK and the church burned to the ground. There have been reports that on some nights you can see the church burning and the congregation praying and dancing.

There is also something odd about the Reverend Berry’s grave. Nothing will grow on his plot. The entire area around it has grass on it, but his grave is always barren.

Lincoln Memorial Park is located in Mays Landing in Atlantic County. It has well over 2,000 interments dating back to 1847.

There was a lady who routinely took photos of graves for people requesting them on findagrave. One day she came here looking for the grave of a woman named Luella. She looked for quite a while and was ready to give up. Before leaving she spoke aloud and asked Luella where she was. No response. She started to gather her things to leave and realized she had lost her prescription glasses. She needed them for seeing up close, but she could see at a distance just fine. She started walking around and found the glasses almost immediately. She saw them lying on the ground several yards away. When she got to them she stopped dead in her tracks. They were lying right in the center of the grave of Luella. She took the picture and left quickly, understandably spooked!

This cemetery is known for having lots of orbs and ectoplasm. 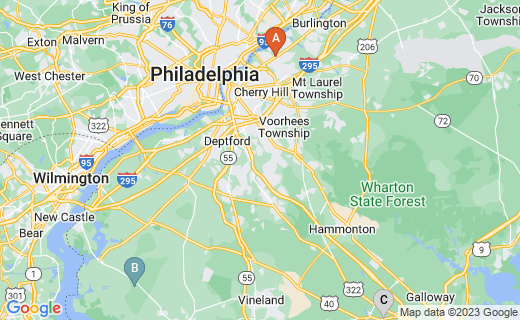